This week, Riley has convinced a drug company employee, Dan, to leak a cover up. A clotting drug has been killing soldiers and supposedly killed Riley’s mother. She sets up a remote meeting. It has taken a year to get skittish Dan this far.

A swap for Mattie and the computer is set up at a food court.

The drop becomes risky and is called off. While the team ushers Dan out, they unknowingly leave Bryan behind. (They should know by now to keep him on a short leash.) This happens: 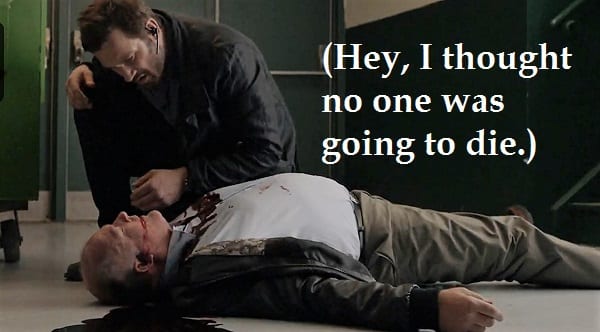 Bryan kills the guy holding Mattie, but Mattie runs off, into the waiting arms of more bad guys in a van. Doh! (Lesson: teach your kids to scream and fight back in public. And have a safety word for your family, so kids know who to trust when Bryan Mills kicks in the door.)

The secondary story with Asha escalates this week. While an aggressively friendly, new neighbor moves in next door, Asha comes home to a stalker rifling through her underwear. The police recommend she stay elsewhere for a few days, in case the guy comes back. She shows up on Bryan’s doorstep again. Of course she does. 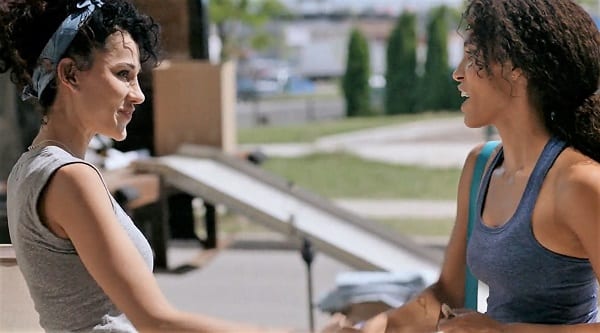 Bryan has a half dozen locks on his door. Why is it so low tech? He says “it gives you time”. Time for what? “To get away, or whatever.” (Sure, sure, getaway, load all your guns, hide a body, set traps… Lesson: Don’t be so flustered by a sweaty, shirtless guy that you miss signs of potential trouble.) Bryan insists she take the bedroom because “the guard dog sleeps by the door.” Of course they do. (Hint: my dog always ends up in our bed.) 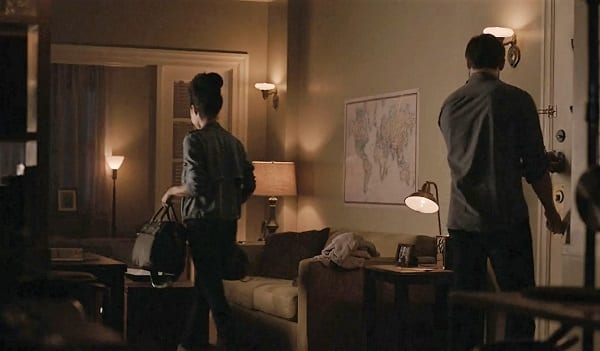 Another drop is set for the next day. Bryan has to go alone. 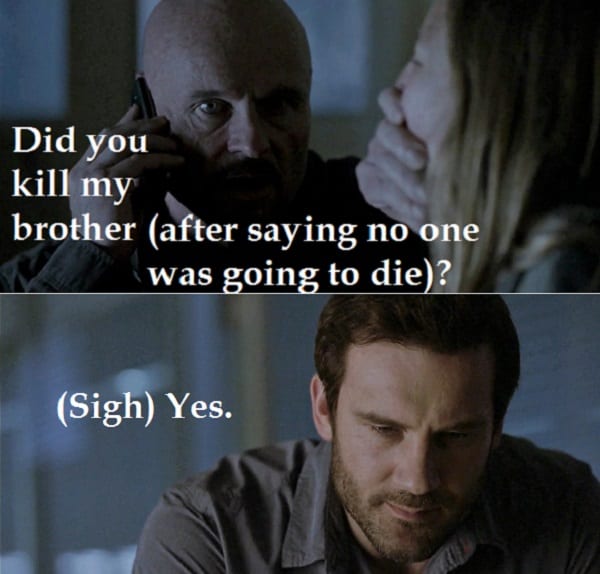 Hart insists, “Under no circumstances do you push this further than exchanging the laptop for Mattie.” But boss lady doesn’t say what to do if Mattie isn’t there. And Mattie isn’t there. So the henchmen take Bryan to Mattie for the passcode. (Lesson: unless you’re Bryan Mills, never get moved to a secondary location. And always microchip your dog, because they will wonder off.)

Bryan waits for the location to be put into the gps, then beats up the gunman and shoots the driver. (Lesson: Never put your actual home address into a gps system. The gps history can be used by good and bad guys alike. Wow, Bryan Mills is a good teacher!) Bryan arrives at an abandoned warehouse. In a moment of cruelty, reminiscent of his new boss lady, Bryan rigs the car to blow up with the handcuffed henchman’s own cigarette. 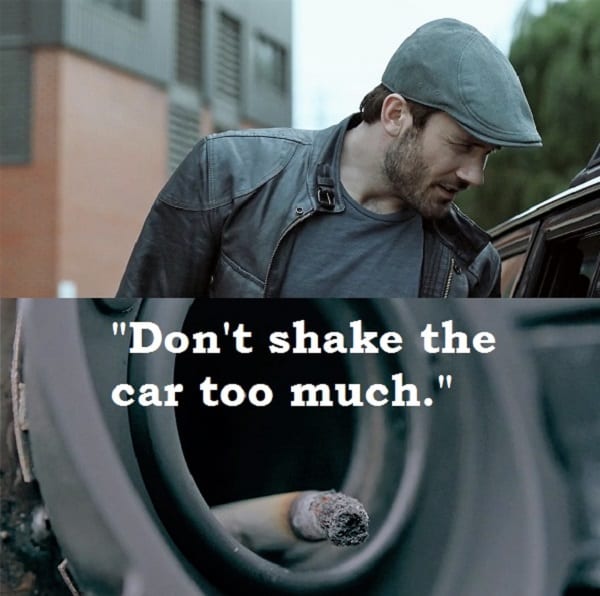 After Bryan electrocutes two guys, the remaining baddies remove Mattie’s gag and leave. This flushes out Bryan. Mattie breaks free and is chased. Bryan kills the pursuer and convinces Mattie not to run. But the leader shows up again. The car outside finally explodes, creating a diversion . (Don’t worry the bad guy handcuffed inside, got away at the last second.) Bryan then dumps a barrel of flammable material and sets fire to the head baddie, shielding Mattie from the scene. 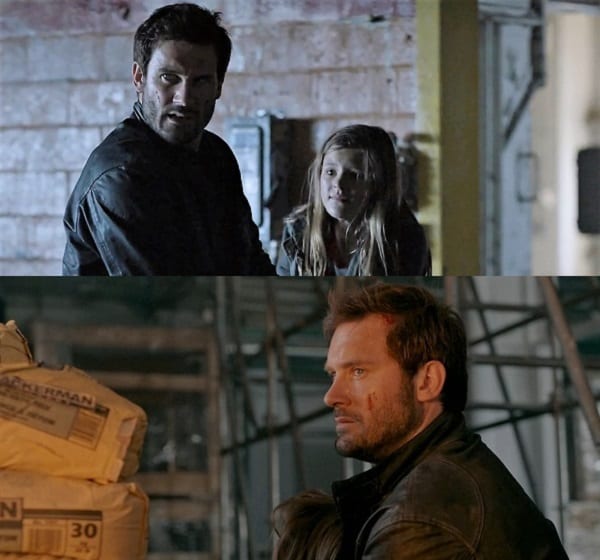 Everyone at Ingersoll is thrown in jail, while those who put together the “Side-Effect Free” defense department reports, probably remain untouched. 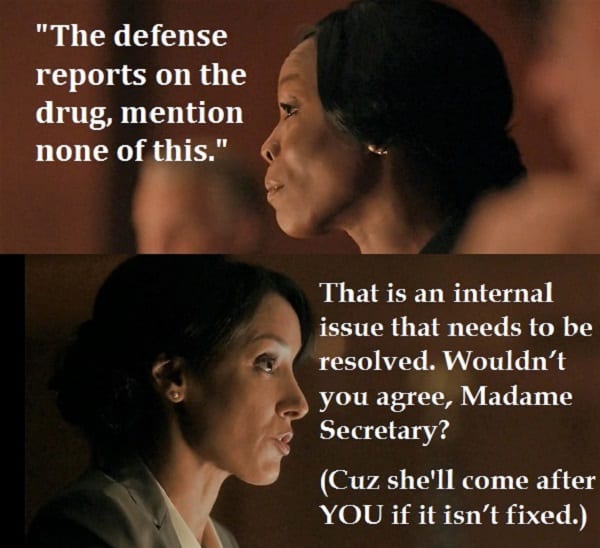 It turns out, Riley’s mom DID die while on the drug, she wasn’t lying. Is Christiana Hart manipulating ALL her employees’ personal losses? 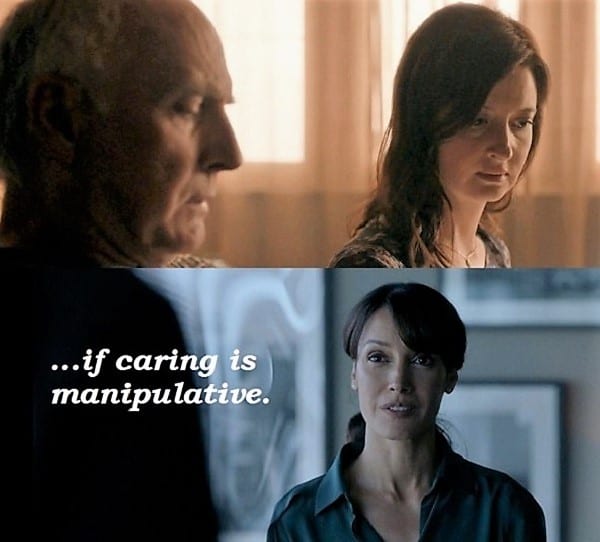 In our final scene, Asha makes Bryan dinner. The guard dog’s favorite meal is Shepard’s pie. Of course it is. (Lesson: If you feed a stray dog, they will stick around.)

He’s upset she made him dinner, or maybe he’s rattled from work (or maybe he knows that it’s so very, very, WRONG to be attracted to his DEAD, LITTLE sister’s best FRIEND!). Bryan works his puppy dog eyes – no more platonic hugs now. Bryan gets ALL the girls this week. 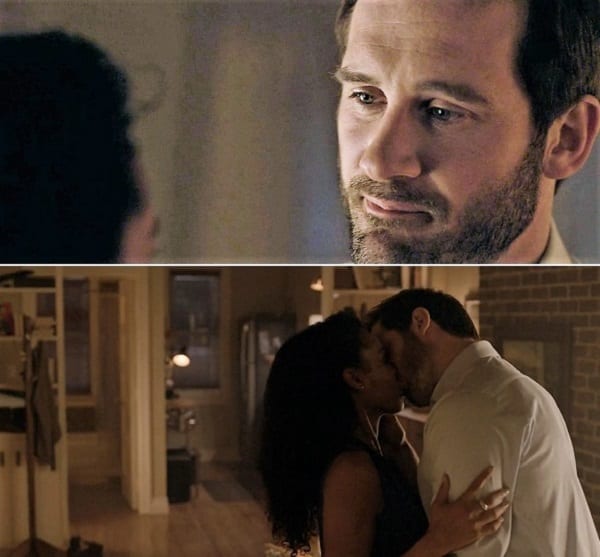 But it turns out Asha’s new neighbor, Elana, is the real stalker, watching from her car. She works for Mejia. (Lesson: Beware of overly friendly new people.) 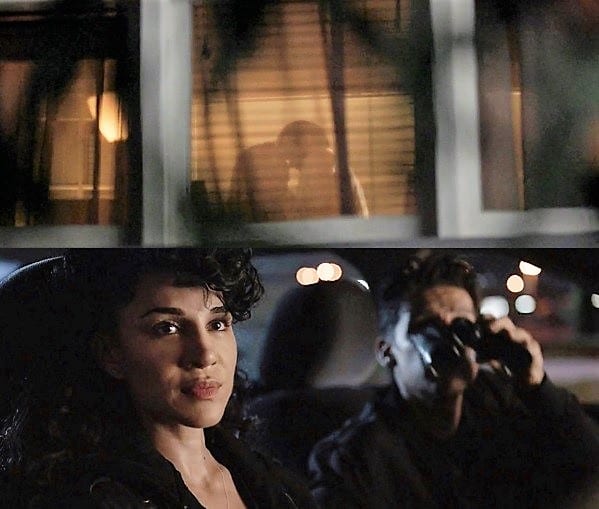 My recap will be delayed next week. But keep tuning in Mondays on NBC for more Taken!