This week, while the Taken team helps an Israeli agent, Leah, Bryan the guard dog, plays Bryan the retriever. He keeps retrieving Leah and her glasses, and acts as her therapy dog.

We open with Bryan retrieving Leah from the airport. There’s a close call, as a foreign agent tries to intercept Bryan’s new project. Bryan introduces himself at the last moment. She is cautious at first. 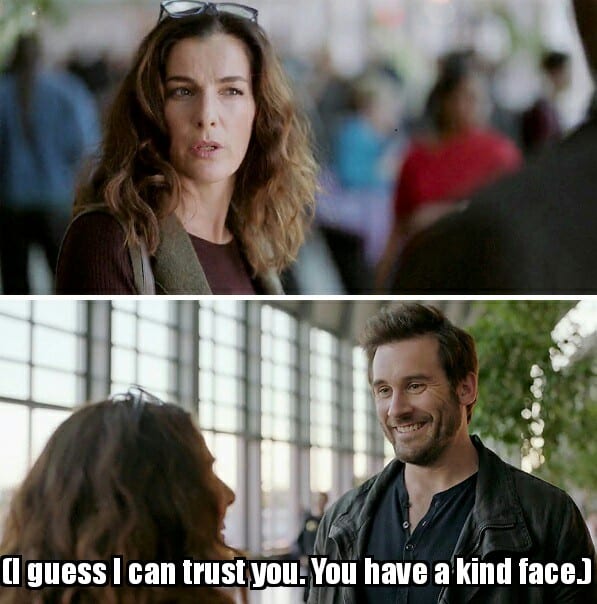 Bryan asks why Leah’s own agency isn’t acting as her bodyguards while in America? That’s for Leah and Christina to know and the rest of us to find out. 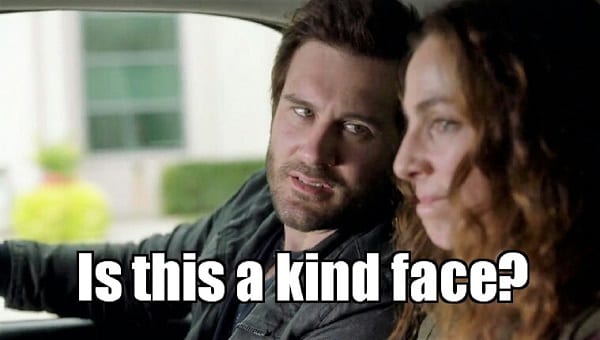 I wonder how an encounter between Leah and airport stalker would have gone down in public, since Leah proves to be a bit of a bad ass in the next scene. 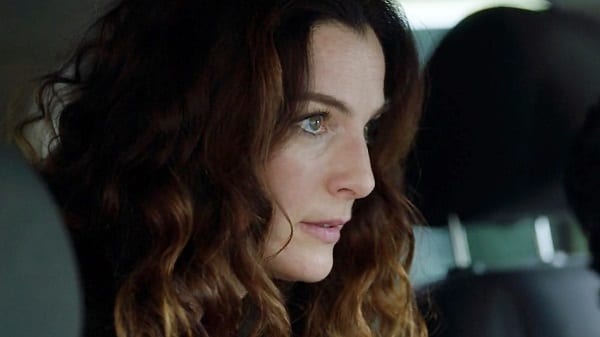 Hart’s old friend is nervous in the car, and doesn’t trust Christina’s team. When Bryan and friends exit the car to investigate an Audi, Leah insists Scott give her a weapon. 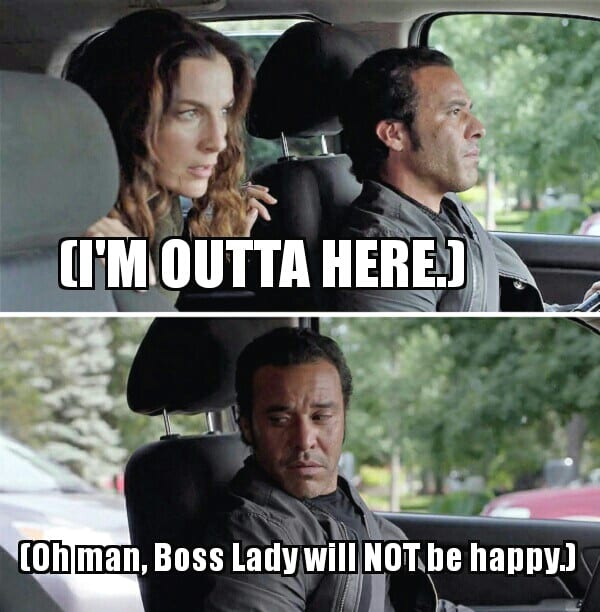 He won’t give her a weapon, so she makes a run for it – shoplifting a disguise as she goes. She’s a stealth little thing. Scott doesn’t even hear her exit the vehicle.

Bryan and the team get to her right after she kills the airport assassin. John admonishes her. If she hadn’t killed him, they’d be able to figure out his employer. 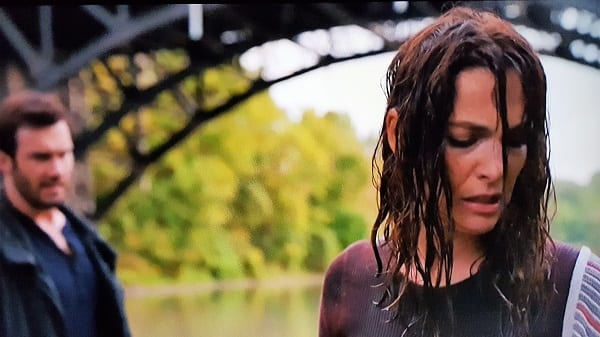 Christina’s old friend is causing the same trouble Bryan has caused this season – killing suspects and NOT staying in cars. I think we can all agree that Christina Hart has a “type.”

Once in Christina’s capable hands, Leah tells Hart she came to D.C. to meet with an asset, and now someone is trying to kill her.  She doesn’t know why the asset wants to meet up, so this asset is her first suspect.

Hart asks her counterpart in Israeli Intelligence about the identity of Leah’s assassin. Christina assumes the assassin is working for the Iranians. She walks away with a different theory. 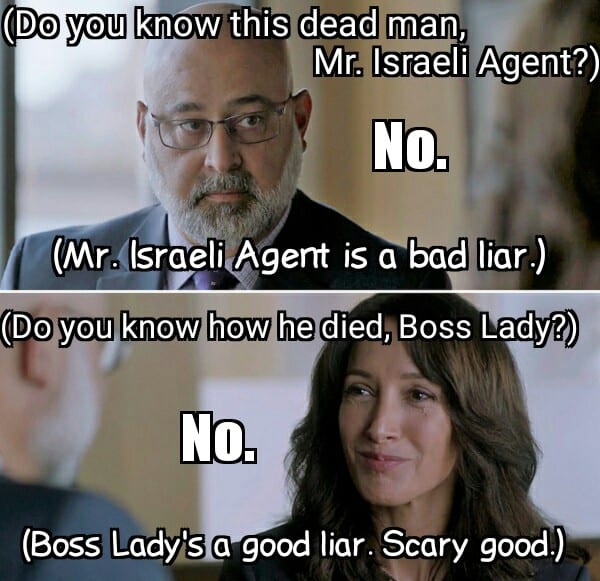 Bryan is the one who sees the problem with Leah memory and behavior. He keeps having to remind her of things and retrieves the glasses she left in the freezer.

The team intercepts Leah’s asset, outing him in the process. He’s definitely not trying to kill Leah. He had legitimate information on an assassination attempt on the Israeli prime minister. Leah breaks down. She finally confesses to Christina and Hart that she has early onset Alzheimer’s. Her own team may be trying to kill her since she has sensitive information.

When Leah opens up about her diagnosis, Christina divulges the grape size tumor in her head. So now Bryan knows about Christina’s tumor.

With the asset’s intel, the team swoops in on the Iranians and thwarts their plot. But none of the Iranians know Leah’s assassin, so that leaves the Israelis trying to put her down. Leah, sets her affairs in order with Bryan then confronts the Israeli Counterintelligence. The Israelis try to take Leah out again. In the getaway, Leah’s car is blown up with her in it. Or so we think.

There was a weird vibe throughout this episode between Leah, Bryan and Christina. Leah trusts Bryan, because he “has a kind face”. At one point she says she’s in shock (after she killed a man) and asks Bryan if he knows how to treat shock. Is this all just the result of her disease, her fear? Or something else? 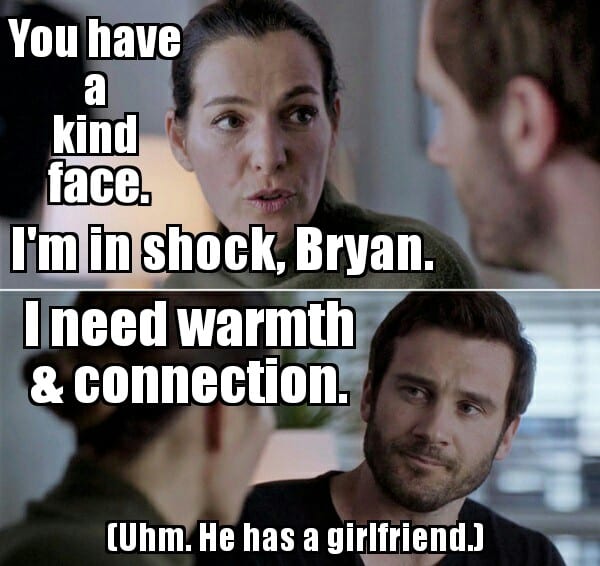 The ending is a further oddity. Leah and Bryan end up on a beach, dressed all in white, looking like undercover honeymooners. Bryan brings Leah her glasses that were left in his locker. Did she really set off the bomb with a remote car starter?  Or is this a dream sequence? Where is this beach? And where is Asha?

Christina ran to Harry at 3am because she was so upset about losing Leah. (Christina likes Harry’s face. He must have a kind face too.) Were all Hart’s actions an elaborate show for the Israelis? Does Hart know Leah is still alive? And if not, will Bryan keep it a secret? 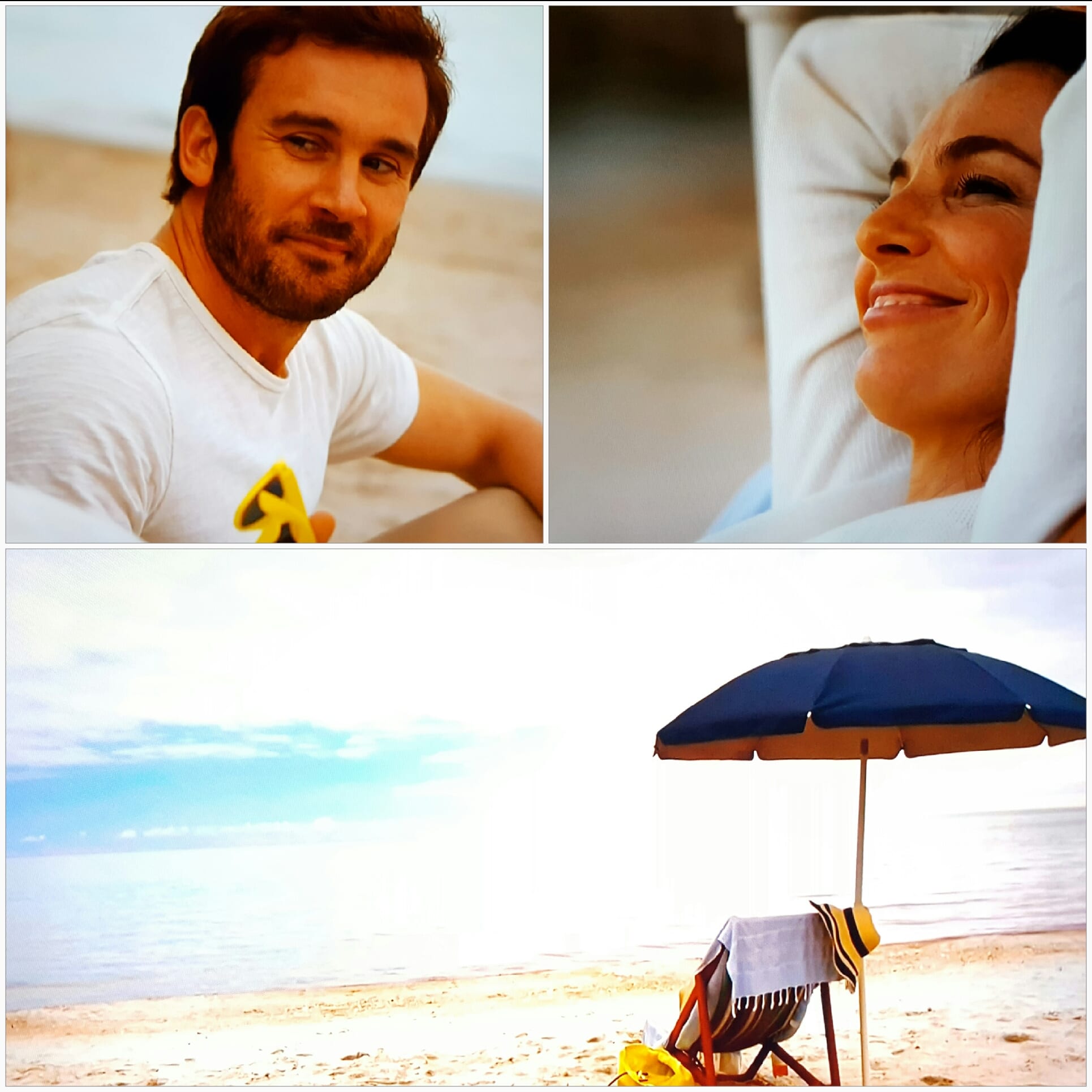 Later this week, watch for Fan Fest’s preview of next week’s Taken. Taken can be seen on NBC, Monday nights at 10pm.

For other Fan Fest recaps of Taken click here!

Special thanks to @TeamStanden for helping grab photos.