Sure, the Odinson’s fourth solo outing is expected to be a box-office smash, and Taika Waititi has stated that he’d be open to returning if Chris Hemsworth agreed to join him again (which is obviously a given), but an intrepid Reddit user discovered an intriguing statistic that may portend trouble for the award-winning filmmaker.

At the moment, no director has ever returned to direct another MCU blockbuster after delivering a film that scored less than 80 percent on the aggregator site, which is remarkable when you consider that Waititi is set to return for Thor 5.

While there are various extenuating circumstances as to why so many behind-the-camera talents did not return, it is nonetheless fascinating reading. Kevin Feige knows exactly what he wants, and if he doesn’t get it, he isn’t afraid to move someone on. 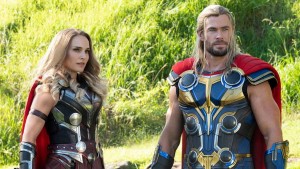 Fans are nowhere near as optimistic about Chris Hemsworth’s potential Asgardian trilogy as they were this time last week, according to the broad consensus, and the evidence suggests that it’s time to switch things up.