Fans of Tom Hardy will be excited to know that the show has been ordered for a second season by FX and BBC. Hardy portrays James Kesiah Delaney, a former corporal of the East India Company, who is presumed dead in Africa, returns after the death of his father, is prone to violence, and suffers from the same mental illness that afflicted his mother.

Season 2 will take James to a brand new setting. He will leave 1814 London behind him and look towards a whole new world! Steven Knight, who is co-creator along with Hardy, envisioned Taboo lasting two to three seasons. There has been no confirmation as to whether the location that the characters are headed to in the season 1 final will be the setting for season 2.

I think we don’t talk about that [Laughs]. In my mind, explosive stuff is going to happen, which will be great, should it happen. There’s a great destination for it, but I don’t know if we’re in a position to talk about the actual details of it. ~Steven Knight, interview with EW. 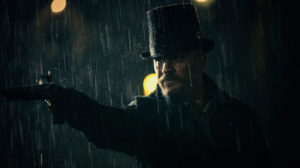 I have yet to finish season one so I am so glad I haven’t caught any spoilers. I, as well as many other fans of the show, are just excited to hear the confirmation for the upcoming season and who doesn’t think Tom Hardy is yummy?

Taboo season 1 can be seen through the FXNow App, Amazon and On-Demand on FX through your local cable provider. It will return for 8 brand new episodes sometime in 2018.