‘Keep Calm and Carry On’ is more than just a fun internet meme. At least it is to the Supernatural Fandom. Besides being a brief narrative for not just the show itself, but also a nod to its unofficial theme song ‘Carry On My Wayward Son’, it happens to be the title of the show’s season 12 premiere episode.

This premiere really brought the family business front and center. We picked up right where we left off at the end of last season; Sam being shot by Toni Babble from the British Men of Letters and Dean finding Mary standing in the middle of the park at night in her nightgown.

Sammy, in the Cellar, with the Broken Glass

Toni takes Sam to a veterinarian to treat the bullet wound she placed in his leg. Once he is patched up, he is put in the basement of an abandoned house, and chained to a chair. Toni fills him in on who she is, and she why she’s there. Her mission is just to ask him a few questions. Then, she says, he can walk right out of there.

Sam’s repeated response of ‘Screw You’ doesn’t go over well, and Toni decides to use the idea of torture to get the answers she is looking for. Sam’s comeback:

“I’ve been tortured by the Devil himself. So, you? You’re just an accent in a pantsuit. What could you do to me?” – Sam to Toni

That was definitely a moment where Sammy was channeling Dean, and easily my favorite line of the episode. Toni and her sidekick turn on a cold shower overhead, and Sam sits through it for presumably a good long while, still refuses to answer her questions.

All of her methods fall short, including taking a blowtorch to Sam’s feet. She decides to mess with his mind instead, and injects him with something. When Sam wakes, he is on the floor and unchained. As he tries to walk around, he begins to have hallucinations of the worst moments of his life.

Toni thinks by torturing his mind, he will break and tell her what she wants to know. Obviously, she underestimated the Winchesters. Sam pulls off a decent fake out, making Toni think he’s slit his own throat. When she checks his body, he gets the jump on her and knocks her out. He tries to leave, but she is able to stop him and keep him locked in the basement.

If you thought for one second that being deceased for thirty-three years would put Mary Winchester off her game, you’d be dead wrong. She quickly drops Dean to the ground when he tries to touch her to see if she is really there. No question – it’s Mary.

After he convinces Mary to let him up, Dean catches her up on the broad strokes of her resurrection. She’s not exactly thrilled to learn that her boys became hunters, saying it was a life she got out of, and one they shouldn’t have to live.

Dean gets Mary back to the bunker and when they see blood on the floor, Dean and Mama Winchester arm themselves and search the bunker. Castiel makes his way back to the bunker after being blasted 300 miles away by Toni’s blood spell. When he tells Dean what happened to Sam, they go right into case mode, leaving Mary to watch Dean work.

Let’s just say she was not only awed by the modern day computers, but at Dean’s ability to hack into traffic cameras. Honestly, if Mary sticks around, I can see a lot of great moments between her and Castiel over the oddities of the modern world. (Side Note: Hey, Writers, can we make this happen please?)

They get a lead on Sam’s location from the veterinarian who stitched Sam up. Once again, Mary proves she is a mama on a mission, when she thinks the Vet is lying about what he knows and orders Castiel to hurt him. He admits to knowing her number, and Dean is able to get Toni on the phone. Though, after he makes his threats, she promptly hangs up on him. They get back on the road to track her down, and get sideswiped by another car driven by one of Toni’s associates.

The woman is able to knock down both Castiel and Dean, surprisingly easy I might add, but Mary wakes up from being unconscious after the accident just in time. She takes the angel blade on the ground and saves her son and his friend.

What We Know About the British Men of Letters

“We plan ahead. We study the lore and use it against our enemies. Every bridge, every thoroughfare, every airport has been warded. The moment a monster steps foot in Britain, we know about it. Within twenty minutes, he’s been picked up, and within forty, he’s dead. There hasn’t been a monster related death in Britain since 1965 because we are good at our job.”

Toni wants the intel on all the hunters in America. She wants to train them in their British ways of handling things, instead of functioning on the way they do find their jobs. The elders of her M.O.L. chapters believe that the Winchesters are a threat, and not good at what they do. Their way of doing things has gone wrong too many times, and now it seems like they want to take control of the monsters across the pond.

What could this mean for Sam, Dean and their Men of Letters bunker? Could they possibly stand in the way of the Winchesters going out on the road for their family business? I think they will prove to be an interesting foe as the season goes on, and maybe even a few allies in the mix.

The Battle for Hell

We can’t close without discussing our demonic friend Crowley. His parts were short, but fun, as he followed two demons that were cleaning up after Lucifer’s trail of wasted vessels. The battle for who sits on the Throne in Hell – Crowley or Lucifer – should be one for the ages and will not be an easy fight to win. Lucifer is weakened after his own battle with the Darkness, so could Crowley get the advantage and take back Hell? 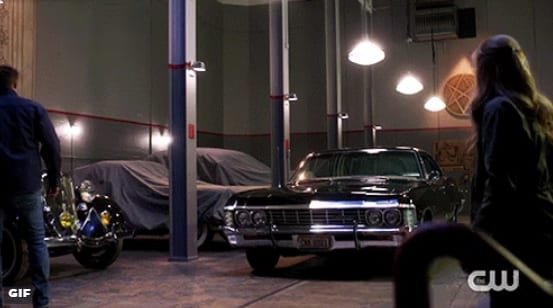 Mary being reunited with Baby is my pick for the stand out scene of the premiere. She clearly loves that car as much as the rest of the Winchesters; even call the Impala, sweetheart. But, it is when Dean realizes what Mary is remembering about the back seat, that the scene takes on that certain something that only the Supernatural crew can pull off.

The inclusion of Mary Winchester is going to make this season one to watch. I think the entire Supernatural fandom is excited to see where this road takes us for season 12! Are you excited for the upcoming adventure? Follow me on Twitter to talk even MORE Supernatural!