This week, the boys pick up a case that not only hits home with their current situation with Mary leaving, but will bring up some old memories for Sam.

Their investigation into the death of a social worker, brings them to an extremely religious devout family, that has decided to live off the grid. Dean, who is particularly surly and snarky, thinks he has an idea of who is behind the mysterious death when he learns the woman’s replacement is a Wiccan. Sam, decides to take a different approach when he learns the family’s daughter, Magda, recently passed away. They split up to pursue their own leads, and of course, to see who ends up being right.

Dean heads over to the office of Child Protection Services to take care of the Wiccan if need be. It only takes a moment or two for him to realize that she didn’t do anything with potions or spells to kill her predecessor. She really wanted nothing to do with the job and really seemed to like her old boss.

While checking out the family’s farm after dark, Sam happens to overhear the father and son talking about their big secret: the daughter isn’t really dead. Magda is being kept in the basement because her family believes that she has the devil inside her. Sam sees her through the basement window, but before he can get to her, he is (for the second time this season), knocked out and tied up.

Sam wakes up to find himself tied in the basement with Magda. He realizes that she’s has some kind of psychic powers, and he explains to her how it doesn’t mean she is the devil like her family claims. Magda explains to him how she didn’t mean to kill the two people that ended up dead. She was just trying to reach out to them for help, but her powers caused them to instead live the physical pain she was being caused in the basement.

Even though her family fears her, Magda is still brought to the table for dinner, as is Sam. It is pretty quickly revealed that the mother poisoned everyone’s food, claiming that their mass suicide would allow them to all enter Heaven together.

Magda uses her powers to stop her brother from eating the food. In a confrontation, the mother ends up stabbing her son when he tries to stop her from stabbing Magda. When all is said and done, Magda’s mother is taken away by the police, and she is put on a bus to California to live with relatives.

Unfortunately, this case doesn’t wrap up as nicely as the Winchesters think it does…

Sam and Dean Have a Shadow

When they were out at the farm, Baby was sitting out front. A mysterious man rides by on a motorcycle and pauses to look at the license plate before taking off again. Later, when Magda is on her way to California, we see her getting off the bus at a rest stop, and the same mysterious man is there. He follows her and after we get a glimpse of the tattoo on his head, we realize its Mr. Ketch. He kills Magda and calls in to the Men of Letters HQ and tells them how he did what the Winchesters couldn’t and put down the threat.

How long will Mr. Ketch be hanging in the shadows and killing the people that Dean and Sam feel deserve a second chance? More importantly, how long before the boys notice that they have this shadow?

What To Do About Mary? 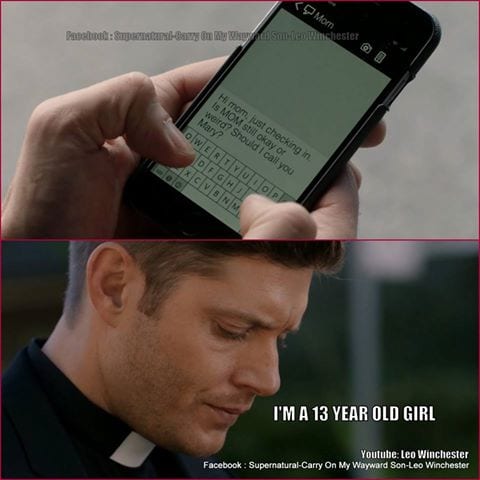 Dean is clearly struggling with his mom’s absence. If his reaction to her leaving wasn’t telling enough, his rather gruff demeanor to the people involved in this case had Sam concerned. Dean tries to brush it off, when he sends Mary a text message, even he realizes that he’s being very sensitive about it.

Their initial investigation brought them to Child Protective Services, where they spelled out that sometimes it is better to separate a family in order to heal a family. This statement seems to resonate with Dean, and I believe it helped him to realize that Mary leaving isn’t the worst thing in the world; and that she will be back. She just needs some time.

“American Nightmare” was also another episode that proves sometimes people are worse than the monsters they hunt. Madga, much like Sam, had a power that she didn’t understand, and that scared her. Even though Sam struggled with these powers too, at least he had the time to try and understanding how to control them. Magda was just told she was evil, and then proceeded to be tortured by the very people who were supposed to love and protect her.

It was a good monster-of-the-week installment, with a call back to what used to be an important part of the show’s central mythology.

Do you think we’ll see Mary again soon? Will Mr. Ketch be ordered to try and stop Sam and Dean from hunting, permanently? Make sure to catch the next episode of ‘Supernatural’ to see how it plays out!