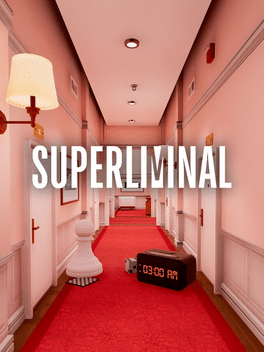 I remember seeing Superliminal for the first time. It was a part of the PlayStation State Of Play that brought us Resident Evil 3. While quite different than RE3 and definitely without the same hype, Superliminal captures the attention as an intricate puzzler. We have a lot of Portal clones and while some are good, not all feel like they have impact. So just how good is this puzzle game? Let’s take a look at what Pillow Castle has crafted.

You start the game in a dream state. You’re participating in a dream therapy session, and in the middle of it all something seems to go horribly wrong. Only the guiding voice of Dr. Glenn Pierce keeps you going, giving you the inclination that somehow you’re going to make it out. But as you progress through the simulation, things get weirder and weirder.

The story is a bit absent as you play Superliminal.

Not that it doesn’t exist, but this is more of an “Inception” type story. Now that I think of it that’s a great comparison, given the whole lucid dream thing. But you aren’t going to know what’s going on immediately. You’re piecing together the narrative, and it works well enough to keep you invested. I know I’m going to make a lot of Portal references, but the only thing besides Dr. Pierce that gives you any information is a GLaDOS-like voice that gets on to you at times.

There’s actually a part of the game that feels like a switch in genre. I thought I was playing a horror game for a moment. Without ruining too much, I honestly almost stopped playing because the anticipation of what might come next was killing me (I hate horror games). Looking to the left in one section, I saw a bunch of the word “DIE”, but it was a few cases of Diet Soda cut off at just the right spot. I was wrong that Superliminal switched genres, but this is an example of crafting your game correctly.

Superliminal has a surprising number of environments to play in. You spend time in plenty of hallways, especially the doctors office you start in. But you move between that, an art gallery, what seems to be creepy maintenance hallways, and more. There isn’t much to interact with on your journey, but the choices Pillow Castle made keep you engaged as you flit around from section to section.

While Superliminal may have somewhat of a minimalist design, the game-play is on point. 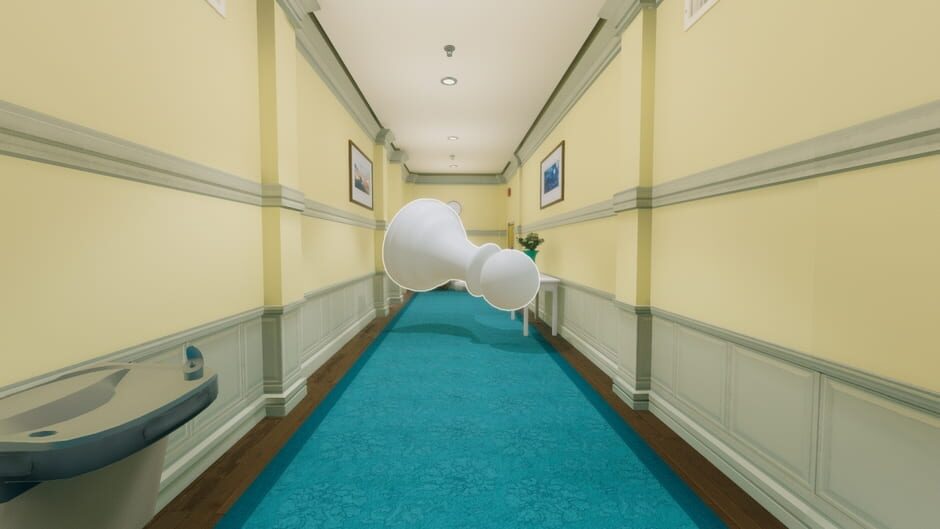 The basis of most puzzles is to exit a room. The game does nothing more than teach you a couple of controls in the beginning, and then you’re truly on your own. Now how do you exit the room? Perspective. All of the puzzles force you to try and look at things from a different perspective. See that child’s block over there? It’s small, but if I hold it above my head, it looks large, and therefore becomes large. This leads to a lot of fun trying new things, and in figuring out exactly how to do everything. Sometimes you’re dropping something on a pressure plate to open a door, others you’re using a sign to create a ramp to jump over a wall. But depending on where you are, you’ll have to think pretty hard on how to shift things in order to move forward.

I’ll admit, some puzzles had me pretty good. For the most part however it was a lot of making objects larger or smaller in order to get up or through different areas. One of my favorite puzzles involves a bouncy castle funny enough. You are in a pool area and in walking through the door of the castle, you find yourself in an upstairs room with a window above the pool. Utilizing your perspective, you can grab the bouncy castle and move it to the diving board area, where the next door is. When you exit the castle, you’re right there to move into the next section!

Ideas like this abound in Superliminal, but I do have one caveat.

It’s too dang short! While the game-play captivates you, it only does for a few hours at best. I know there are several things I missed while playing. There are several dice hidden in secret spots, and I only found what I’m assuming is the first one. But in one sitting I completed Superliminal in the span of about 2 hours. I’m not griping at it, because it was a great experience. But I enjoyed the game so much, I wanted more. I know the original Portal can be beaten in about 3 hours, but it seems a bit more fleshed out. Maybe that’s truly how I feel with the game, that it feels like more could have been done. More puzzles, more narrative, something. I just didn’t like leaving with that feeling of “It’s over already?”.

As this game does a great job charming you, I want to end talking about the final portion of the game. I absolutely love the final message the game imparts. For the sake of spoilers I’ll avoid talking directly on how it ends, but this felt too important to pass up. I’ve mentioned earlier how the puzzles rely on perspective. The good Dr. Glenn Pierce finishes your “therapy” by reminding you that all situations you encounter are shaped by how you perceive them.

This is a pretty deep idea that many games try to tackle but don’t always find the right way to present. Superliminal takes you through all these puzzles to impart something bigger than the game. Depending on how you and I view our everyday, we might have a good or a bad one. It’s the perspective we decide to take that will define it. This game is truly incredible in that it uses it’s medium to leave me with a better understanding of that truth. The ending sequence is truly special as it constantly shifts your environment to drive home it’s point.

Superliminal is an intriguing experiment. I love the way it’s built, and the choice of perspective as your game-play method. I do wish there was more to the story, but it makes up for that in a tremendous manner as you finish the game. My biggest hang-up is that I need more of it, both in puzzles to solve and story to complete.

Unfairly, most puzzle games are going to get compared to Portal. And while Superliminal isn’t Portal, it charts it’s own course in the final narrative pieces.

Thanks again to our partners at Terminals/Evolve PR and Pillow Castle for providing a review code! Superliminal is available now on PlayStation 4, Xbox One, Nintendo Switch, and PC for $19.99.