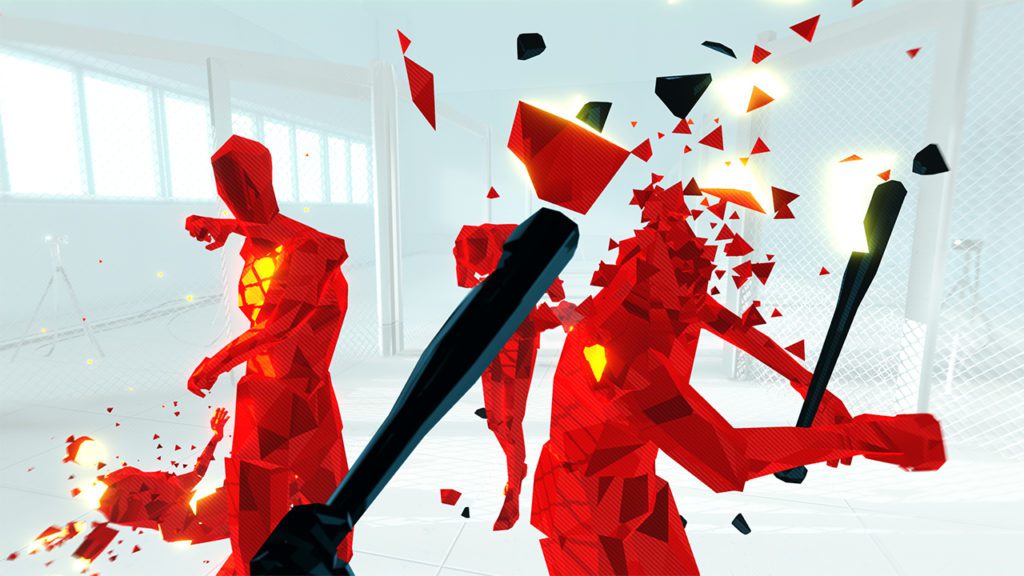 It begins with a message sent to the player: “You playing Superhot yet? I’ve never seen anything like it.” Confused, your character begins to ask questions. Instead of answering through text, the mysterious messenger decides to send you the files. “Just run superhot.exe” they explain, so begrudgingly the player complies.

You’re thrown into a white room with only one message: “TIME MOVES ONLY WHEN YOU MOVE.” An individual, all in red, is falling back as if shot. You’re holding a gun and as you begin to move, other red jagged characters begin to approach. You take your time to line up shots, watching as bullets fly toward you an inch at a time as you strategically place your character and then you hear “SUPER HOT” as the level replays at full speed, showing the feats you just accomplished in all their violent glory. 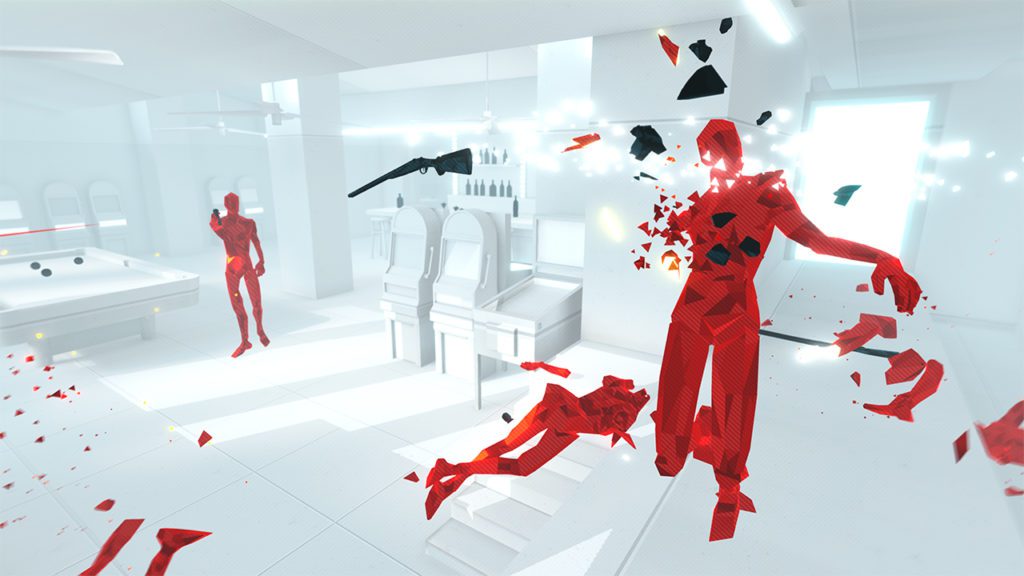 After a few levels a glitch occurs, knocking the player back to reality. “That’s been fixed” claims the mysterious messenger, who then sends you the updated .exe file, allowing you to progress. This back and forth continues until the game begins fighting against your intrusion. “Quit now” it asks you, but you forge on. The game begins to control your thoughts, keeping you inside it for hours at a time and changing your messages to say only want it wishes – causing turmoil in your friendship with the mysterious messenger.

But why is the game doing this to you? Why can’t you control your actions? Why do you continue despite the danger? These are the questions you’ll ask yourself as you progress through the increasingly difficult levels while following – or sometimes ignoring – the directions given by an unseen entity. 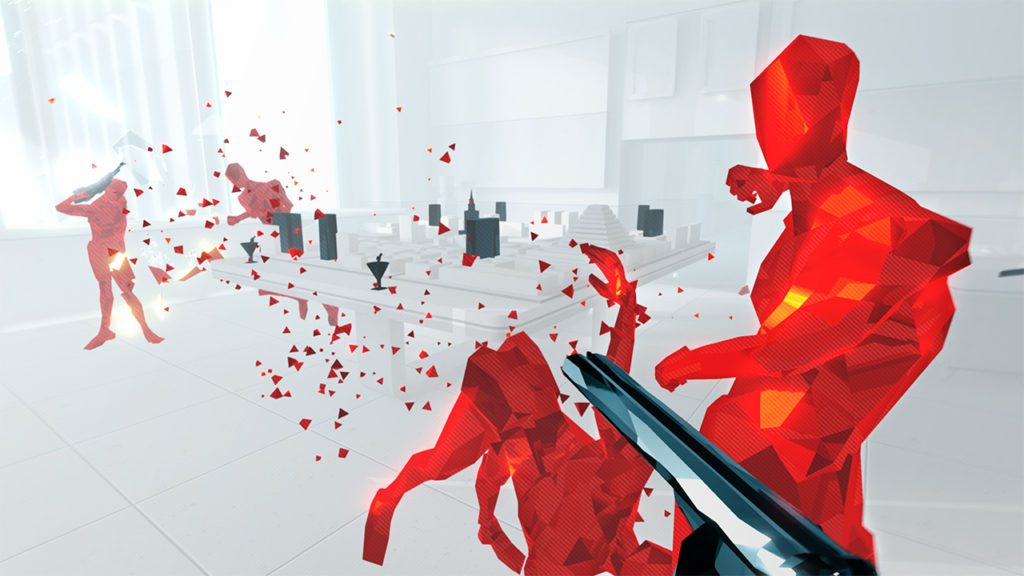 Superhot’s unique gameplay is what sets it apart from other shooters. Part western shootout, part strategy game – your sole goal is to kill everybody in the room by whatever means necessary. Each level, once completed, is only about 30 seconds long during the replay – but the bulk of the game lies in figuring out which approach to take when clearing the area.

You can punch an enemy and steal their weapon, pick up objects and throw them at enemies to distract them, wield swords to cut down enemies in a single slice, or grab a shotgun and take out a crowd in one fell swoop. The possibilities are almost endless and there is no right or wrong way to play.

At first, the game is almost overwhelming. We’ve become so accustomed to run and gun shooters that when forced to slow down and think we aren’t quite sure how to proceed. After a few levels though something magnificent happens and then game just – CLICKS. After that you’ll be taking down enemies in quick succession, being genuinely proud of the methods you devised for clearing out a particularly nasty room.

There isn’t much to Superhot. There are around 30 quick burst levels, each requiring anywhere from 1 minute to 3 minutes to complete, depending on your level of skill. In-between levels there are short segments of story consisting of either your back and forth banter with the mysterious messenger or the cryptic commands spouted out by the unseen entity. Each level pushes you ever closer to a conclusion, although the game makes sure to keep you confused until the very end. 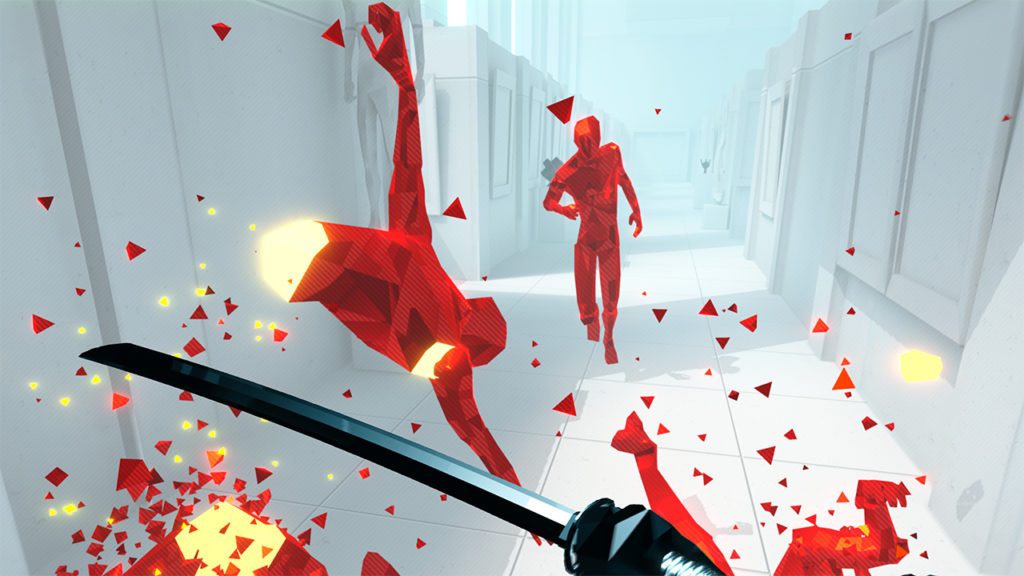 Superhot is short. At worst the game may take 2 hours to complete, but to a veteran player it could last less than 30 minutes. Fortunately, there are multiple modes which unlock once you complete the game for the first time including an endless mode and a challenge mode.

The endless mode is exactly that: a fight against an endless supply of enemies with the sole goal of surviving as long as possible. The challenge mode boasts a few more features including levels with specific criteria to complete such as fists only or speedrun timers.

The menu hides a few secrets of its own and in the various subfolders available you’ll eventually stumble upon two mini games: Treedude and Shrl. Shrl is locked behind a password and may or may not have recently been cracked by players while Treedude is a basic game where you just, well, cut down a huge tree while dodging branches. While nothing hidden in the menu leads to anything significant, it was still fun to search the various subfolders for a half hour or so. 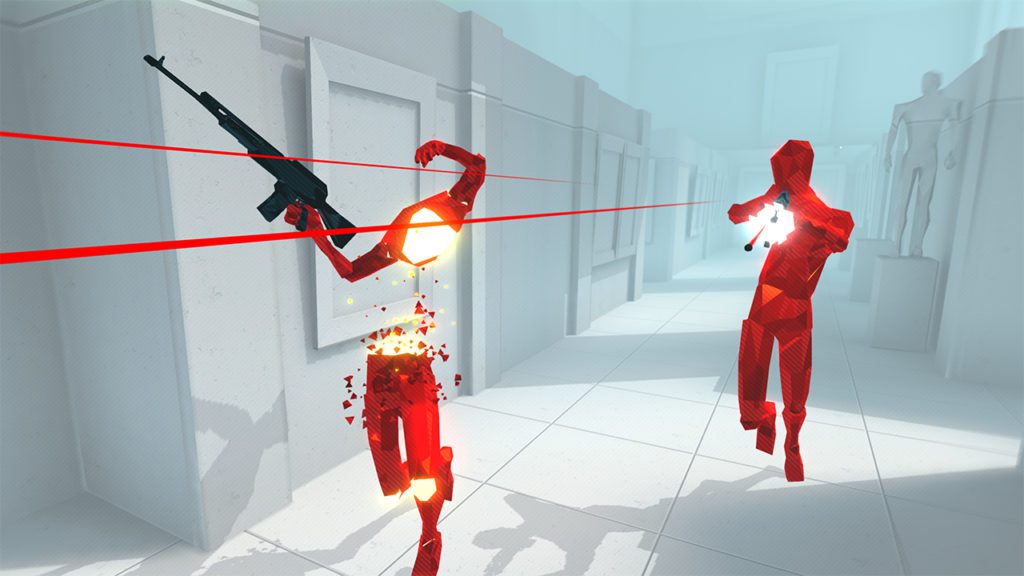 I enjoyed Superhot for what it is: a fast paced, strategy based take on the overcrowded FPS genre. Sure, the game may be short, but that doesn’t take away from the fact that there is nothing currently on the market remotely similar. If you’re looking for a break from the norm but still don’t want to stray too far from the FPS genre, then you would definitely benefit from picking up Superhot.