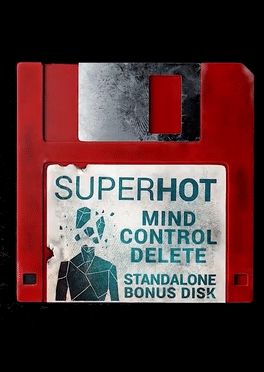 The original SUPERHOT is one of my favorite shooter games. I know it doesn’t fit the traditional FPS game mold, but to me it is. You won’t find many games as unique as SUPERHOT, and with such a simple hook. SUPERHOT also came to VR (which I need to play), and people have been wondering what would come next for this indie franchise. I’m excited to say SUPERHOT: MIND CONTROL DELETE exists, and I’m here to tell you all about it.

Most fans remember SUPERHOT. You play as an unknown character who gets ahold of a computer game that literally changes their life. The gameplay is simple, yet captivating. Time moves ever so slightly, but as you move it speeds up. These odd looking red people come after you, and you do everything in your power to break them apart. You’ll punch some, shoot others, and slice through many more as you traverse each small white environment.

SUPERHOT: MIND CONTROL DELETE follows the mantra of, “if it ain’t broke, don’t fix it”.

And that’s not at all a bad thing. The fight continues as you jump right into the world. The games starts off pretty odd. You beat up people for about ten minutes, and suddenly the game is over. Well, that’s what you’re led to believe, but anyone who knows how trippy SUPERHOT Team makes things knows this isn’t the end. You repeat the cycle again, and before you know it the person running the simulation is talking to you again.

“There is no meaning. Just a hollow sense of progression and power. You want more of it?”

This is where SUPERHOT: MIND CONTROL DELETE amps it up. You see, there are things called hacks in this game. You have major abilities at the beginning of running the simulations, like more hearts to survive, or charging at an enemy. My favorite was charge because if I was in a bad spot, I would just run straight at a bad guy and beat him up. It is a good way to get out of the way of fire as well. Then you have smaller hacks you can choose between as you progress through levels of the simulations. SUPERHOT: MIND CONTROL DELETE gives you the option of choosing between two random ones, and as you play you’ll earn more to use. 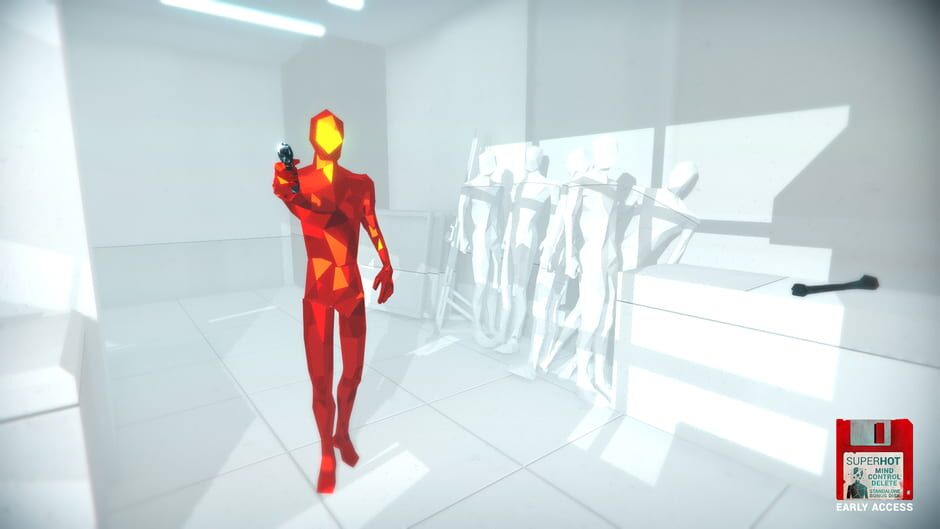 These are truly the big new additions to the game.

Some hacks have you moving faster, while others let you throw a vase and it explodes into a hail of bullets. This is where the strategy of playing a SUPERHOT game really comes into play. I almost always choose charge, so I am left with only 2 hearts, and thus have to be extremely careful as two hits and I’m dead. This leaves me choosing my hacks specifically. If I’m going to be more vulnerable, it makes sense to start with a random gun or katana rather than pick the hack that let’s me deflect bullets back if I hit them with a katana. It’s a cool addition to a cool game, and it works well.

My only real qualm is that these choices force the player into more of an action game. The original feels like a puzzle game, figuring out how to play each level in order to progress. SUPERHOT: MIND CONTROL DELETE sends wave after wave of enemies at you and says “STOP THEM”. The way the action unfolds is something SUPERHOT does in a way no one else does, but it’s almost missing something in pushing this game-play style. That’s not to say this isn’t awesome, as the flow of combat is something out of a John Wick movie. You are a powerhouse.

While it does work well, there is a problem I ran into. While the original SUPERHOT feels fresh, MIND CONTROL DELETE wears out its welcome after a bit. I enjoy what the game is doing, but the levels/simulations are almost too long and repetitive. There is a lot of variance in locales, but within the first couple of simulations you’ve largely played them all. I found myself hoping to find my way to the end of the game as quickly as possible, rather than trying to play more levels. The original SUPERHOT is about 3 hours long if you just play through the story, while MIND CONTROL DELETE is technically a standalone expansion and is twice the length. I feel like this could have been managed better. 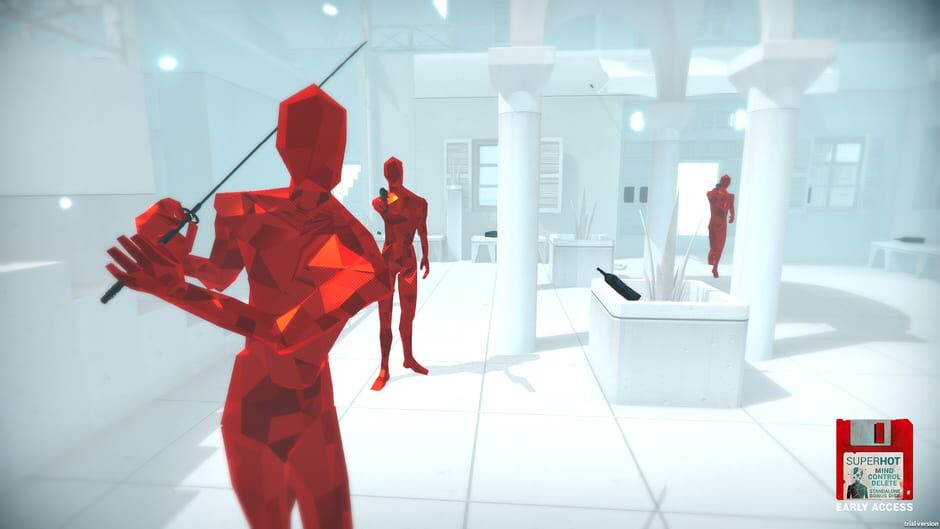 As for the story of SUPERHOT: MIND CONTROL DELETE, I’ll leave that to you.

It’s an interesting concept, but you have to look for it to find it. The essence of the story really is your accumulation of power, and if it’s really what you want. What’s truly nutty about the game is the end. If you want to jump back into SUPERHOT: MIND CONTROL DELETE, be prepared. You’re going to have to leave your system on for hours as the game “reloads”. I’ll let you find out just why that is :wink:.

SUPERHOT: MIND CONTROL DELETE is a fun way to spend your time. I can honestly end with that statement, but I’d rather elaborate. While it’s more of the same, it’s not bad that it’s more of the same. I don’t think anyone is upset to feel like John Wick taking out bad guys. The game does somewhat forgo its puzzle-ness in favor of action, and that’s a bummer. But anyone who loves the original SUPERHOT is going to be head over heels for this game. And hopefully not because a red guy hit you with a baseball bat.