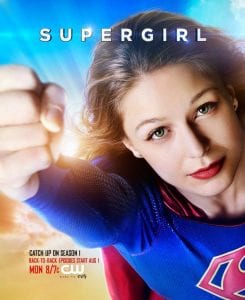 The CW Network has released a new poster promoting the airing of the entire first season of Supergirl on Monday nights starting August 1, with two episodes running back to back each week until the second season premiere titled, “The Adventures of Supergirl.”

“Supergirl” will join her superhero friends “Arrow,” “The Flash” and “DC’s Legends of Tomorrow,” all of which also air on The CW.

The new season of Supergirl premieres on October 10th.

Photos used with permission from The CW Network and CBS Network.