Super Mutant Alien Assault by Surprise Attack Games and Cybernate is a short, but frantic game. Like Dead Cells before it, the point of the game isn’t to complete the story, but rather to continuously play through the game. Each chaotic jaunt through the three galaxies will unlock new starter items, difficulty settings, play modes, defense boosts, enemies, and playable characters. Be prepared to die – a lot – during your journey though. 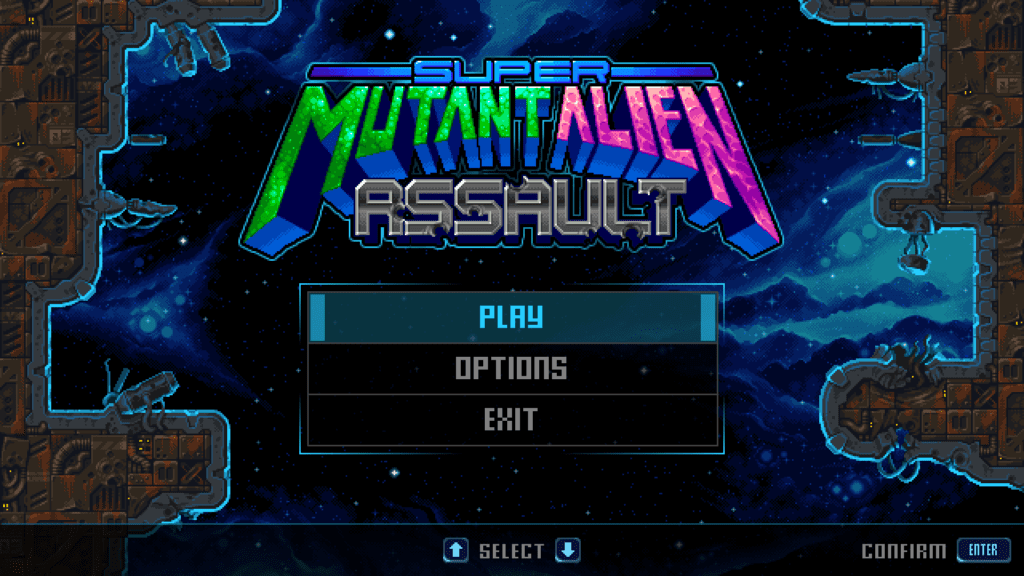 Earth had no warning; the aliens appeared out of nowhere. The assault was swift and devastating. Three flights escaped from the war ravaged Earth, each heading to a different galaxy. Unfortunately, the enemy aliens have found the ships. With the humans lying dormant in cyrofreeze, it seems that humanity’s only hope is a lone defense droid.

A simple story, told entirely before the title screen, is all you are given – and really, it’s all you need. Your job, as that lone defense droid, is to blow up every alien that you meet. Simple. 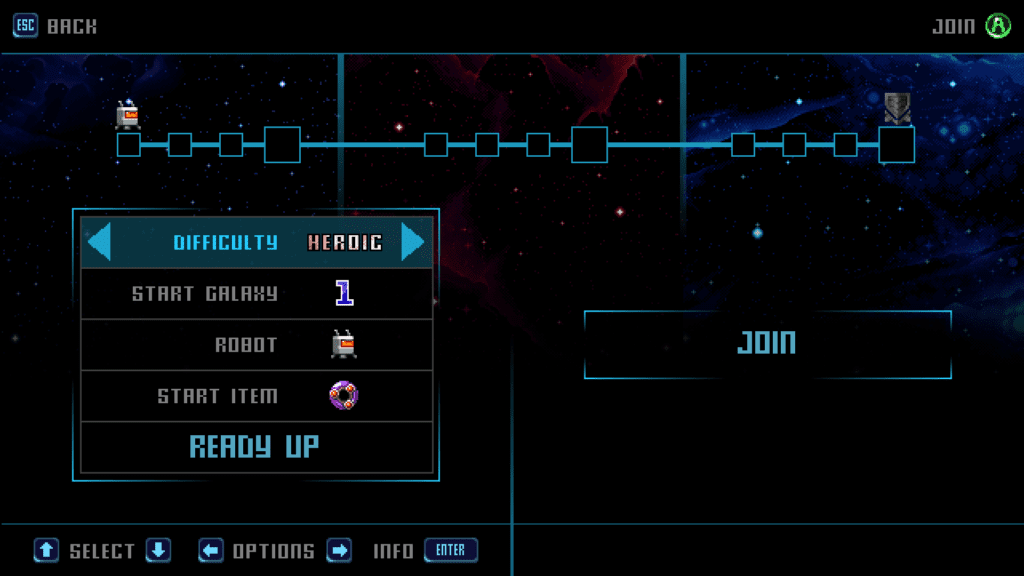 Super Mutant Alien Assault is a frantic, fast-paced, box shooter in which the player must fight their way through randomized one-screen rooms to reach the galaxy’s boss. Each galaxy, of which there are three, features three randomized levels and then a randomized boss room. While the bosses stay the same, the layout and features available in the level will change each time – so you can’t always hope for a Health machine to save you if you took a bit too much damage during the earlier levels.

To begin, you are given a load out screen. At first, the options are pretty bare – you have one character to choose from, no starter items, no choice of galaxy to begin at, etc. Of course, the more you play, the more options you’ll have at load out.

The game features a couple of tutorial levels to help you with the basics, but pretty quickly throws you into the meat of the game, leaving you to fend for yourself. As you progress through levels you’ll break crates which will either feature a weapon or a defense upgrade, such as dash and the double jump ability, which will then become available to you during load-out or will begin to appear during earlier levels.

Additionally, the more you progress the more level modes you’ll unlock: some feature multiple beacons which must be defused before exploding, fuel tanks which must be brought to the main fuel hub, or orbs which must be rolled or carried to their destination. All of which is secondary to the unrelenting assault of aliens. 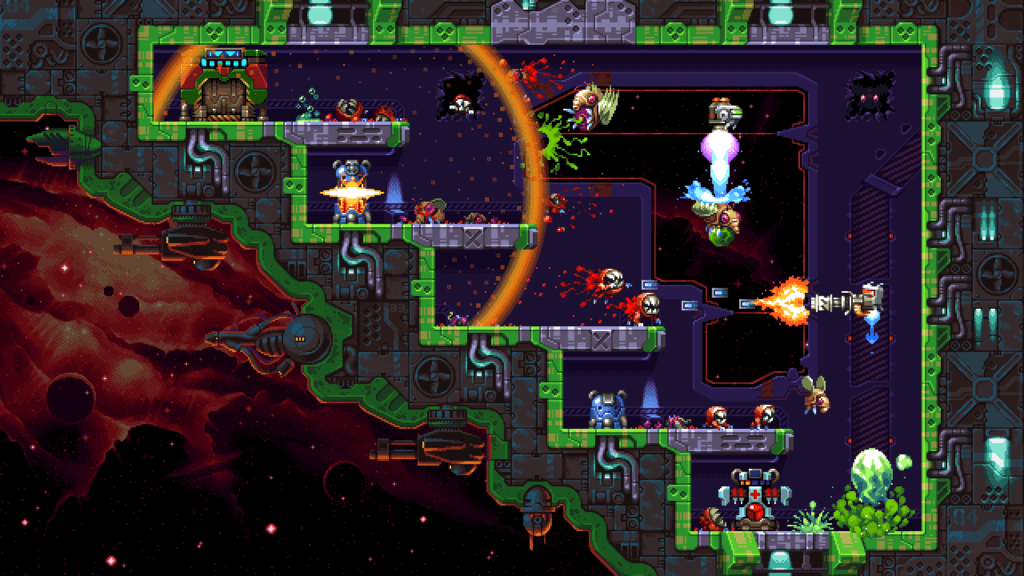 Each level has its own goals, which change every time you play – so galaxy 1, level 1, may sometimes have a goal as simple as killing aliens until a meter at the top of the screen is full, or might involve you running fuel tanks back and forth while killing aliens, but in that case three fuel tanks must be moved before the level will allow you to finish off the alien onslaught. These changes between levels keep the gameplay fresh while you fight your way through the galaxies and definitely helps keep the game from becoming stale during subsequent playthroughs.

Multiple guns are made available to help you in your quest to rid the ships of alien scum including a pistol, rocket launcher, grenade launcher, machine gun, dual machine guns, and a pogo stick that explodes. There are also different types of explosives available as a secondary weapon, including those you can throw and those you can plant and then strategically detonate. A special weapon, of which ammo is dropped from slaying particular enemies, can sparingly be used and, after you acquire a few different types, can be switched out in your load out or via your inventory during gameplay.

Most weapons and explosives are found distributed by machines scattered throughout the stages, which have a short recharge time in between uses. If you don’t like a weapon, simple, just dodge aliens until the machine has recharged and swap it out for another. There is a health machine which sometimes makes an appearance, but rarely in more than one of the four stages in a given galaxy. The machine, while helpful, recharges slowly and only refills a pitiful half a heart of health at a time and has a max use of around 4 times – so don’t hope for too much help from it. Still, it is a welcome sight after some particularly grueling fights.

Like previously mentioned, there are three galaxies, each with three levels and a boss. You are given one life and five hearts of health to make it through all three levels and the boss; any death will force you to retry from the beginning. Upon your first completion of a galaxy it becomes available as a starting point during load out, but there are perks that can only be gained by those brave enough to fight their way through all three galaxies and twelve levels in a row – one of which is higher difficulty levels. 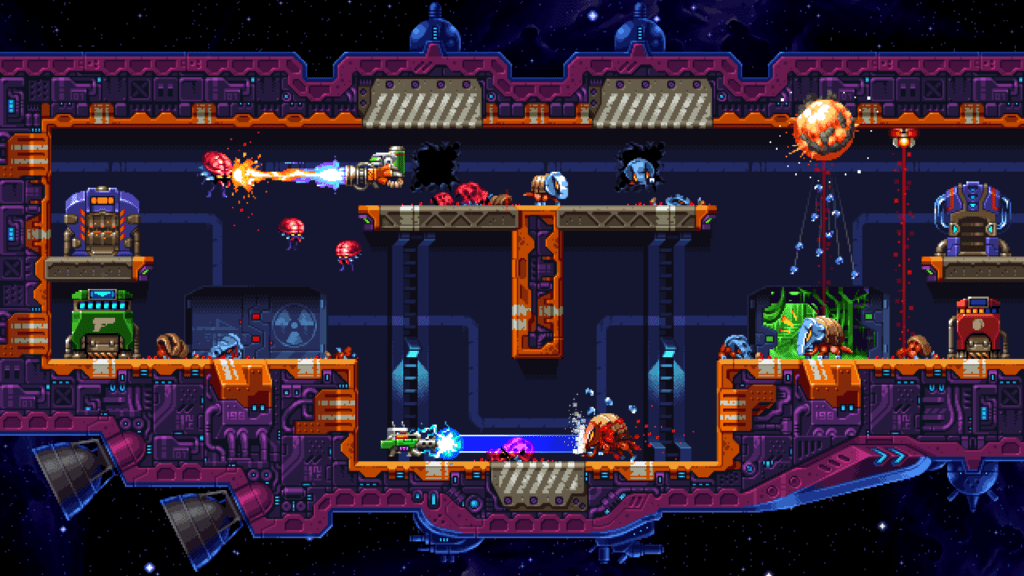 Co-op is a welcome feature on the Switch, and allows two players to couch co-op throughout the entire game but beware, if either one of you dies – both of you must restart from the beginning. So it is imperative that you plan together and tackle levels in a smart way and quickly learn to share resources such as the health and weapon machines.

Overall, the game is essentially a straight forward wave shooter in which you are given varying objectives with the end result ultimately being to kill everything in sight and figure out how to escape the level. The randomization of the levels help to keep the game fairly fresh, as the stages are almost always multi-tiered and give you ample chances to dodge or take out your enemies. While enjoyable, I did find myself – despite the short length – pressing through only to find the next weapon upgrade. To be fair though, while the game is a slog at first, it greatly opened up to me as I found new starter weapons and characters and helped me to feel as if I really had a chance against the unrelenting hordes. 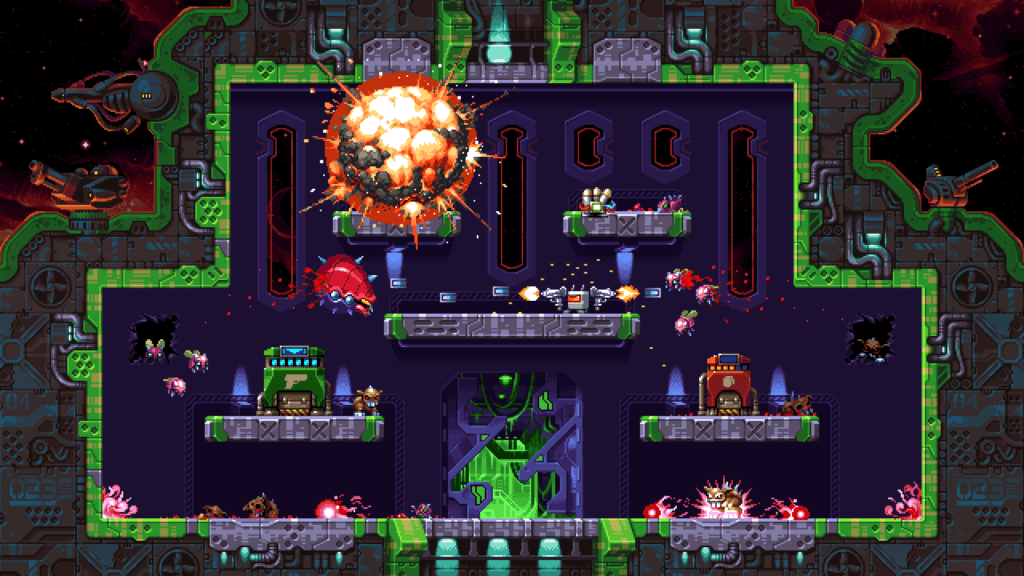 Super Mutant Alien Assault is short, especially if you only intend to play through it’s three galaxies and twelve levels once. That can be done in anywhere from 30 minutes to 1 hour, depending on your learning curve and level layout. If your only goal is to play it once and be done – then this isn’t the game for you. But if you love games where each run through challenges you a bit more and gives you a few more options, then you’ll love Super Mutant Alien Assault. It is a game meant to be played repeatedly, either solo or with a friend, and as such anybody who approaches the game with no intention of replying will be short selling the game and find theirselves disappointed. 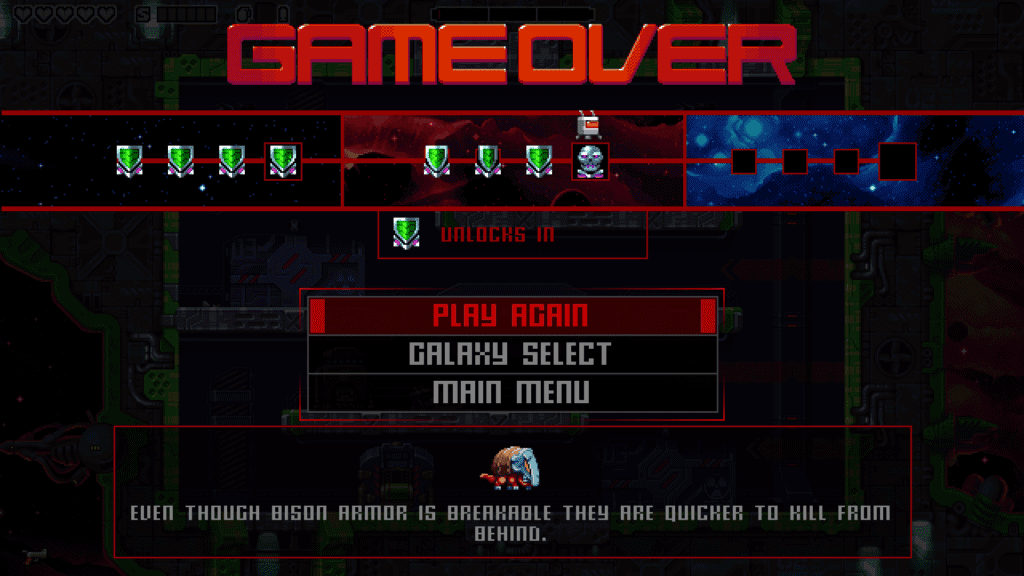 I enjoyed Super Mutant Alien Assault, although I was skeptical at first. I’ve never been much of a fan of the box level type games and the difficulty was a turn off for me during my first few play throughs. I became frustrated as I repeated level after level and almost gave up, but then it happened, the game just – clicked. I understood what I needed to do, I understood the gameplay mechanics, I understood the load out system, and I understood how to juggle enemies, bosses, and other items at once. That was when a whole new game opened up to me and I began to enjoy myself. It was never difficult due to insurmountable odds, it was purely because I wasn’t paying close enough attention, wasn’t using everything at my disposal, or sometimes just not paying attention to what the level’s actual goal was.

In retrospect, it seems silly that I spent so much time confused by the game. It explains everything; just the life-time gamer in me was sure I knew how to do it without being told and spent my time ignoring the carefully laid out instructions.

As long as you embrace the game for what it is – a retro inspired, side-scrolling shooter – you’ll love your time in these galaxies and become addicted to unlocking just one more character – just one more item – and find the time slip away as you slowly master the gameplay and learn to put bosses in their place, leaving you wondering what ever was so difficult in the first place. Super Mutant Alien Assault is a fun and simple game; for only $9.99 you’d be amiss not to give it a shot.

Super Mutant Alien Assault will be available on the Nintendo Switch on July 12th, 2019 and is currently available on Steam.

A review code of Super Mutant Alien Assault for the Nintendo Switch was provided by Surprise Attack Games and Cybernate for the purpose of this review.