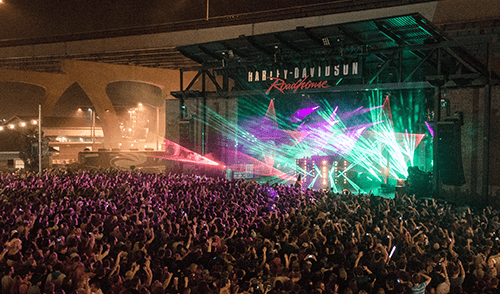 If you’re looking for a festival to treat you to some of the biggest names in music, food you can’t get anywhere else, and experiences that last a lifetime – and that frequently warrant tradition building – Summerfest in Milwaukee has got you covered.

Summerfest is more than a music festival, it’s a state of mind, and the proof is in the pudding. For 11 days, across 11 stages, over 800 acts perform for hundreds of thousands of fans. In 2017, the festival is celebrating is 50th event, and they’ve got plans to make this the biggest summer yet.

The vision of Summerfest is described on its website.

“Summerfest was the brainchild of the late Mayor Henry Maier in the 1960s. Following a visit to Oktoberfest in Munich, Germany, Mayor Maier dreamed of a festival for the people that would revitalize Milwaukee’s downtown and bring the community together. In 1968, the first Summerfest debuted at 35 separate locations throughout the city.”

As the years progressed, the festival found it’s permanent home on Milwaukee’s lakefront, where permanent structures and stages were built to ensure the success of the festival as well as it’s longevity. If you look at photos and videos from Summerfest now, you’ll see that it’s location is just another thing that makes it so unique and so special for festival-goers every year.

To make the 50th celebration extra special, they’re pulling out all the stops with everything from special merchandise and artists that you absolutely can’t miss. One thing that we’re already dying to get our hands on is the ‘Powerpass’ – it’s got a cool 3D effect and it grants admission through all 11 days of the celebration. There’s also a classic t-shirt that you’ll definitely need to have before the festival.

Now, we know at this point, you’re waiting to hear about those artists. Well, we can’t wait to show you who you’ll be getting to see live. First, however, let’s look at some of the big names of Summerfest past. If you’ve been part of the festival before, you know how incredible it’s been, and if you haven’t this will sell you on the entire experience.

This year, as the lineup is revealed, you’ll see names like Luke Bryan, P!nk, Red Hot Chili Peppers, Zac Brown Band, and Tom Petty and The Heartbreakers. That’s just a few of the hundreds of acts that will be experiencing Summerfest with you this year.

If you’re sold on this festival already, just like we are, go to their website and be on the look out for the tickets available for purchase as well as the passes for all 11 days, 3 days, or even single day admission! You won’t want to miss out on this.

We hope to see you there.