It’s no secret, it has been all over the internet in the last few days. It seems that Harley’s jester suit will be in the movie! But somewhere I do not believe that she’ll put it on. I think this was meant as somewhat an easter egg for after the movie. But, a lot of fans are waiting to see it for real… and I do too! Take a look at the picture: 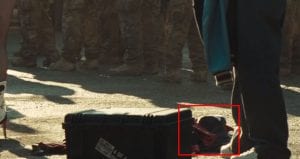 If it’s an easter egg, we don’t know yet. We’ll have to wait for another while. But at least it’s there! Or it seems to look like it. We are not even sure on that. This is madness! It gives a view of how many problems Harley Quinn has in the movie though. What I mean is, that the obsession with the Joker will be problematic.

Another thing I want to talk about is the ways of Jared Leto his method acting. I’m not happy about it, what can I say. It’s just outragous that you can be that disrespectful. He did some disgusting things on the set of Suicide squad and I’m a bit ashamed myself that I’m writing about this. It seems he went all out on his method acting. I understand the art, I really do. But even Heath Ledger was respectful to his co-workers. He kept a terrifying journal to let his Joker out. But he did not do what Jared Leto do.

He truly went into full Joker mode for this. Of course, the Joker is a well known psychopath and he doesn’t care for personal space or things like boundaries. I understand the fact that you have to get a little insane to get into the skin of the famous villain.

Jared Leto sent his co-stars some pretty disturbing things. Adam Beach who plays slipnot said that Leto sent Margot Robbie a nice love letter with a box with a rat in it. A rat that was alive. To Will Smith he sent a letter with some bullets. Not only this, which can be seen as the lightest of the crazy things he has sent before, he now sent a video to the cast, and a dead hog. He once also sent a dead pig with a video with him acting as the Joker in it.

Will Smith had his own comment on this and it seems he got used to it. He said that Jared went ‘full Joker’ and that the general rule is that you don’t go full Joker. The rest of the cast members seemed a bit uncomfortable and didn’t want to talk about it. I think he did even more things than we all imagined he would do.

What do you think about Jared Leto his acting? Did he go to far? Tell us about it!

Home » Movies » ‘Suicide Squad’ News: Is Jared Leto Losing His Mind As The Joker? What about Harley’s Jester Suit?