Congratulations to the cast of Stranger Things for their Screen Actors Guild Awards win on Sunday night!  The cast won the category of Outstanding performance by an ensemble in a drama series (for the full list of winners, click HERE). 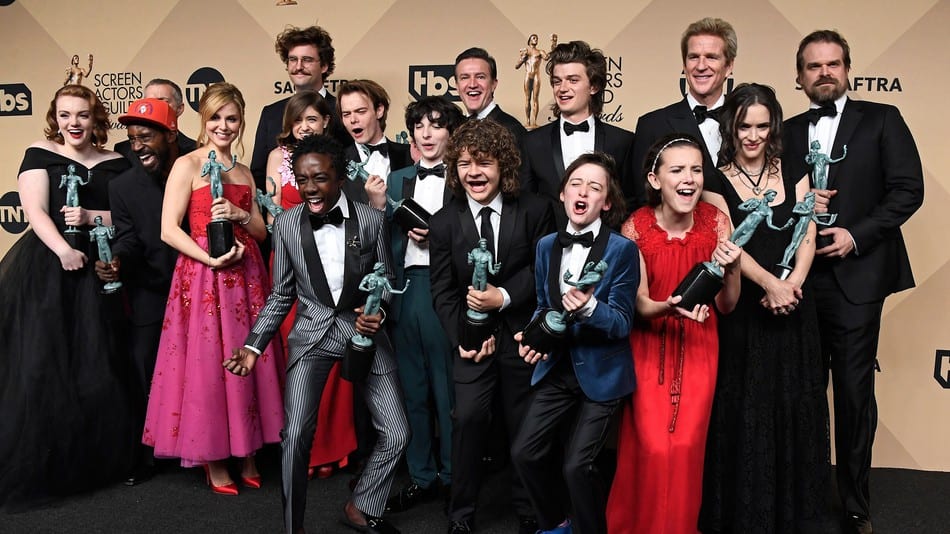 As they took the stage, it was Harbour (who plays Jim Hopper on the series) that stood front and center in the group to deliver what just may be the best acceptance speech of the entire night.

Earlier in the day, Harbour posted a photo to Instagram showing that, if they did win, he was somewhat ready with a speech in hand.  The caption on the photo reads, “Wonder if I’ll be able to give this crumpled up chicken scratch speech tonight for best ensemble in a drama series.  It’s all about you, all my brave fellow artists, and how important you are to this world.” Well, Harbour got that chance and he made good on his word delivering a speech punctuating the importance of his fellow artist colleagues! 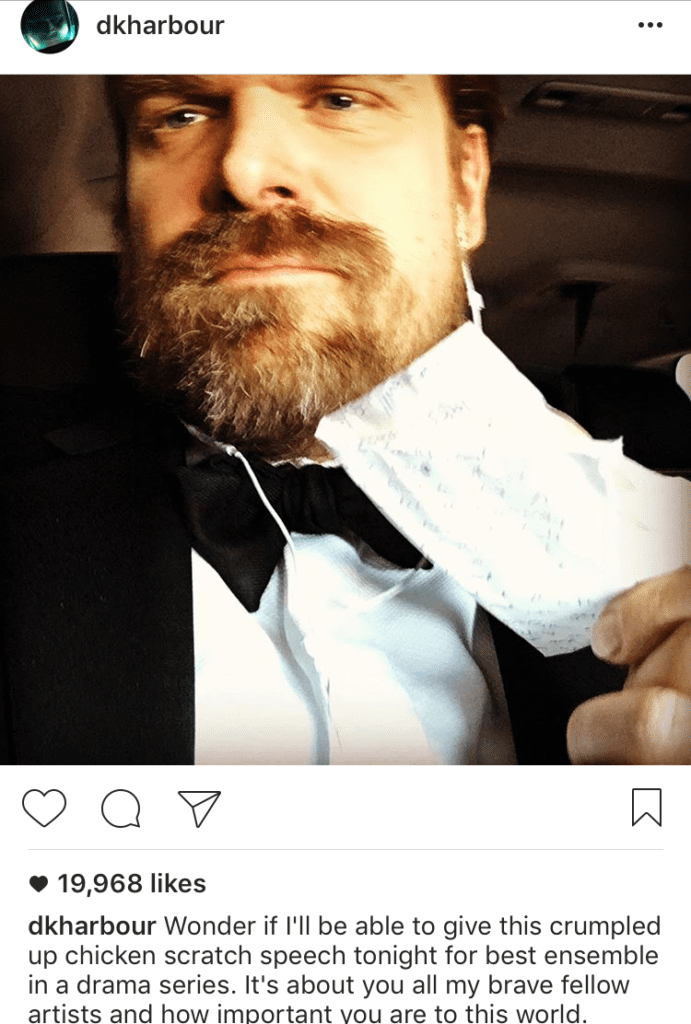 Each word he spoke was done so with impassioned reverence.  He brought the entire room to a standing ovation, left some folks shocked by his unbridled and passionate delivery and sent his co-star Winona Ryder through a complex rollercoaster of emotions.  Harbour said:

“In light of all that is going on in the world today, it is difficult to celebrate the already-celebrated Stranger Things, but this award from you, who take your craft seriously and earnestly believe, like me, that great acting can change the world, is a call to arms from our fellow craftsmen and women to go deeper and, through our art, to battle against fear, self-centeredness, and the exclusivity of a predominantly narcissistic culture and through our craft to cultivate a more empathetic and understanding society by revealing intimate truths that serve as a forceful reminder to folks that when they feel broken and afraid and tired, they are not alone.  We are united in that we are all human beings and we are all together on this horrible, painful, joyous, exciting, and mysterious ride that is being alive.  Now, as we act in the continuing narrative of Stranger Things, we 1983 Midwesterners will repel bullies. We will shelter freaks and outcasts, those who have no home. We will get past the lies. We will hunt monsters. And when we are at a loss amidst the hypocrisy and casual violence of certain individuals and institutions, we will, as per Chief Jim Hopper, punch some people in the face when they seek to destroy what we have envisioned for ourselves and the marginalized. And we will do it all with soul, with heart, and with joy. We thank you for this responsibility!  Thank you!”

Check out the video of his speech below (watch it at least twice.  Once for the speech and then a second time just to watch Ryder’s reactions):

After accepting the award, the cast filed off stage and into the pressroom where Harbour further explained how this epic moment came to be, “I did not think we were going to win but I did know that if we did win, I’m very bad at improvisation, so I did not want to go up there with nothing to say.  So I figured I’d write this speech, and it’s gone through many iterations. I’ve had a lot of feelings and thoughts since last week and I wanted to express it in some way that dealt with what we do through our art and also the craft of acting.”

Later in the evening, Harbor posted the following to his twitter page, officially capping off the night by saying, “My fellow artists. There is no greater honor than to be counted among you in the fight to bring us together. And the Winona memes are epic. ;)” 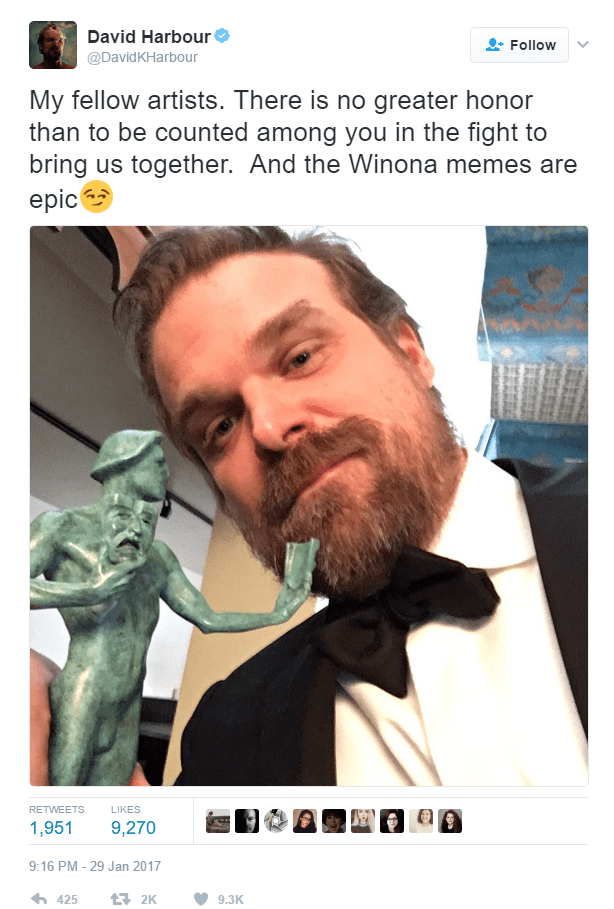 Stranger Things is currently in production for a second season.  The first season can be streamed, in its entirety, on Netflix.