[Spoilers ahead for those who have not finished watching Stranger Things season 1.)

In her brief time on screen, Barb has achieved quite a cult following as the loyal, relatable, sharp-tongued best friend that she plays on Stranger Things. So much so that she landed the center spot on Entertainment Weekly‘s compilation of pop culture influences for the entire year of 2016.

No doubt Barb has made a splash with viewers, even to the point of fans conspiring that perhaps she is not really dead, that she will somehow return from falling victim to The Demogorgon. Producers have scoffed at this idea but did have the following to say about the character in December 19th issue of TV Guide magazine.

“What was your take on the popularity of Barb (Shannon Purser), who was killed in the parallel dimension the Upside Down?”

“Most of the stuff, people were reacting the way we were expecting them to. Barb, certainly not. We love Shannon, but she had, like, 25 lines the whole show! But that’s great. It couldn’t happen to a better person. We all were in shock. There were murals and graffitis, like, ‘Barb, Rest in Peace.’ That blew my mind.”

Personally, I think fans are drawn to Barb’s confidence. Barb is not the leading lady. She is not the most popular kid in school. But she is happy just the way she is. Barb is the voice of reason warning Nancy that she does not need to conform to someone else’s idea of who she should be. Barb implores Nancy to stay true to herself. 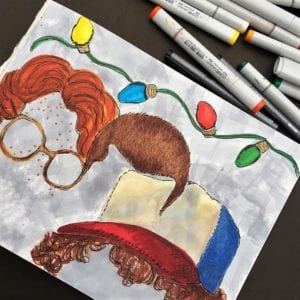 And who can resist Barb’s nostalgic appearance? The prairie shirt, the big glasses, the Trapper Keeper, all staples of your average 80’s high school girl.

I also took the opportunity to ask Shannon’s acting teacher Jayson W. Smith about how her performance resonates with fans.

“All I can say is she is a wonderfully talented natural actress born with the gift. I hope she is able to use her talents fully and stay focused on what can be a long successful career.”

(By the way, Jayson W. Smith is also working actor who you will find in season 7 of the AMC hit series The Walking Dead.  Read my interview with Jayson here.)

I cannot wait to see what season 2 of Stranger Things will hold for viewers.  But the character of Barb was most certainly a big part of the success of season 1.  The way fans connected with Barb is both a tribute to Shannon Purser’s portrayal and the character the Duffer brothers created.