When we last left the Capulets and Montagues, Escalus (Sterling Sulieman), ordered the marriage of Rosaline Capulet (Lashana Lynch) to Benvolio Montague (Wade Briggs) in order to keep the peace in Verona. If the city is at odds then there would be a better chance for the surrounding cities to expand their borders by taking over a divided Verona.

In a flashback, Escalus is talking to his father who is sending him to Venice to keep him away from the feud. The Prince wants Escalus to learn how to rule properly as well as stay away from Rosaline. He tells Escalus that he cannot choose to be with, let alone, marry a Capulet. It would be like the crown choosing a side. Escalus pleads with his father for at least the chance to say goodbye. The Prince refuses.

From where the last episode left off, Rosaline and Escalus were caught in the chapel by Benvolio. He calls out to the others that they have been found. Rosaline and Escalus, not knowing exactly what he saw, remember that they shared a passionate kiss in the first episode, they follow Benvolio back to the others. Believing that Escalus wants the same as she does, she hopes that he will refuse the marriage and instead choose her. Quite the opposite happens. He states that the wedding will proceed as usual and we see the pain on Rosaline’s face.

At House Capulet, Lord Capulet (Anthony Head) informs Rosaline that she is a lady now and she needs to act as such. She is not to sleep in the servant’s quarters any longer. She is given Juliet’s room. She is reluctant to accept but realizes that he just wants to have her where he can keep his eyes on her and lock her in.

While at a whorehouse, Benvolio is interupted by his angry uncle, Lord Montague (Grant Bowler). He orders him to meet him outside and informs him that he will not let another betrothal go to waste.

Lady Capulet (Zuleikha Robinson) is enraged that Lord Capulet has given Juliet’s room to Rosaline. He gives his reasoning but she is too grief-stricken to hear him. She accuses him of caring more about Verona than his own blood. Rosaline overhears everything.

Three prisoners are brought to Prince Escalus, 2 Montagues and 1 Capulet, accused of murder. He orders them put to death although you can see that he is struggling with the decision to enforce the crown’s laws. Isabella (Medalion Rahimi) reminds him that he needs to show strength while he holds the crown.

It comes to light that the Capulets are having trouble paying their debts.

Lord Montague is sensing that there is something wrong in the House of Capulet. He is curious to find out why the Capulet Cathedral has stopped construction. He sends Benvolio to find out why.

Livia (Ebonee Noel) is ordered to tend to Lady Rosaline. Livia sees that this may be her chance to leave with her sister if Rosaline marries Benvolio and takes her with her. Rosaline is firm in her decision that she will not marry a Montague. She says that she needs to speak to the Prince. Livia knows that it is inappropriate for her to do that but plays along with serving her sister. She asks if she can get her anything and she replies that there is.

Rosaline asks to see Princess Isabella in hopes to ask her to ask the Prince to speak with her. She informs her that she does not want to marry a Montague. Isabella invites her to the Royal Feast that is being held that night and she agrees.

At the cathedral, Benvolio stops a young peasant girl from stealing chisels from the architect working on the cathedral. They talk about art and sculpting which leads the man to reveal some valuable information about Lord Capulet not paying his workers. We find out that Benvolio actually paid the girl to steal the chisels in order to gain the worker’s trust and info.

The next morning Benvolio reveals the news to Lord Montague. They conclude that the Capulets are either too cheap or just broke. He decides to reward his nephew by inviting him to the Royal Feast that night. Benvolio says he’d rather not but his uncle tells him that he is obligated, being the heir to House Montague.

At House Capulet, Livia is tending to Count Paris (Torrance Coombs) who is fighting for his life from the stab wound given to him by Romeo.  He is burning with fever. She believes he will not survive the night. The nurse asks if she is going to use the boiling oil that she has prepared and Livia tells her that her father told her that on the battlefields they tended to wounded the same way. She pours the boiling oil onto Paris’ wound and he screams in agony. She gives him a rag to bite down on and informs him that he will die if she doesn’t do this. He painfully agrees.

At the Royal Feast, Rosaline is approached and ridiculed by Benvolio. Oh yes, people…There is so much sexual tension there, you can cut it with a knife. They seem to hate each other so much but you can already tell that this will change. Just when and how remains to be seen.

While dining, the Prince informs ALL the houses in attendance that there will be no more feuding amongst the families in the city. They will dine as one united Verona.  The betrothal of Rosaline and Benvolio is also announced by Lord Montague who mockingly suggests that the wedding be held in the Capulet Cathedral. Lord Capulet graciously declines due to it being unfinished. Other parties at the table begin to quarrel with each other, taking sides. An angry Prince Escalus stabs the hand of one of the quarrelers to get everyone’s attention. He informs them that the peace that he had just previously stated was not a request by instead an order and if anyone disobeyed, death would be the outcome. He agrees to the wedding at the cathedral. The Princess is pleased.

Down in the Capulet family crypt, Lady Capulet interrupts Friar Lawrence (Dan Hildebrand) as he mourns over Juliet’s body. She asks if they knew each other and he denies they did. Still struggling with the grief of losing her daughter, Lady Capulet, tells Friar Lawrence that she would not question Juliet’s death if it had made some sort of sense. She was so full of life. She informs him that she believes that someone was feeding her thoughts and thanks the friar while leaving.

Count Paris wakes calling out Juliet’s name. He realizes that she is not really there and asks Livia who she is. He thanks her for saving his life and they look into each other’s eyes. Livia blushes while still tending to his healing wound. THESE TWO ARE SO GOING TO HOOK UP!!

Isabella takes Rosaline to Escalus. After disagreeing for a bit as to whether to proceed with the marriage or stop it, Prince Escalus tells Rosaline that she will not marry Benvolio and will figure out another way to unite the city. They kiss and she asks him if he is sure and he says he is. They tell each other that they love each other. They stop kissing he asks her to stay and they will talk while still being a gentleman. He says that they will announce their news in the morning. They sit and talk about Venice. 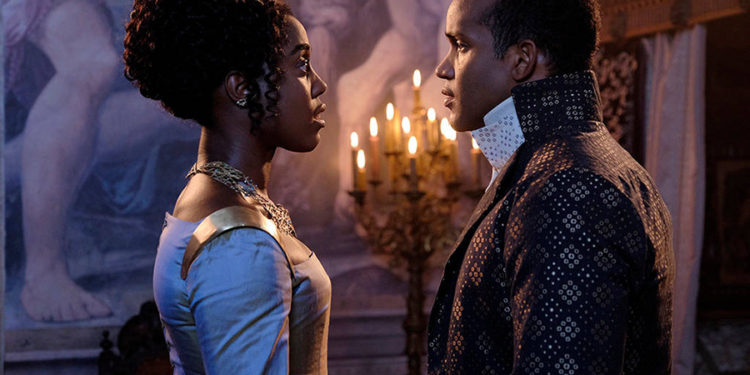 At the cathedral, Lord Capulets is having words with his architect. Lord Capulet wants the work done but the architect tells him that it cannot if he is not willing to provide what is needed to pay his workers. Capulet states that there isn’t anything to give and the architect suggests if he is no longer a “man of great means.” He tells Capulet that he will not lie to the Prince and take the fall for his lack of money. Lord Capulet forces him to take the fall by pushing him to his death.

Lady Capulet is ransacking Rosaline’s belongings in search of some clue as to why Juliet died. She believes that she was influenced by Rosaline.

While Rosaline sleeps, Escalus is taken to the Montague family crypt where Romeo’s dismembered body has been discovered. On the crypt wall, the phrase “Death to all Montagues” is written in Romeo’s blood. Escalus does not believe that it is someone from the house of Capulet but if the word got out, a war would certainly be declared. He swore to prevent any war from occurring. He orders that the body be put back in its original state as best as possible, covered and the crypt be left as though it had been undisturbed.

The next morning Rosaline wakes and asks who is going to tell Lord Capulet that the wedding is off. Especially that she spent the night. He tells her that she is correct but suggests that she was with the Princess instead of with him. She asks what has changed and tells him that he tricked her. He tells her he didn’t but can’t explain to her why he is not ending the betrothal and that he wants her to marry Benvolio. He convinces her by using Livia and saying that no one would marry her knowing that her sister was a harlot. He tells her it’s for the best. She walks off.

The murderers from earlier in the episode are put to death to prove the crown’s strength.

Episode two ends leaving us with some questions. How far will Lady Capulet go to prove the real reason Juliet died and who helped her? Who is the mysterious hooded figure that is provoking a war between the families? Will the news that the Capulets are not as well off as we thought, be revealed? How does Rosaline come to terms that her wedding to Benvolio can soon become reality? Will she develop feelings for him, or him her? Will Count Paris fall for Livia?

What questions do you have after the first two episodes? Are you liking this new series, and if not, why? Leave your comments below.

Still Star-Crossed airs every Monday night at 10 pm on ABC.