Since news of the untimely and tragic death of Nelsan Ellis broke, fans and friends have been paying tribute via social media to the man who owned every room, set, and stage he visited. Nelsan was quite an actor and contributor to the entertainment industry, but there are some things that only his co-workers would know about him; behind the scenes moments that made his characters who they were.

Namely, Lafayette on True Blood. We told you last night that his costars and friends had been sending love and sympathy and messages of absolute disbelief on social media and all of them were very special in their own way. They recalled happier times with Nelsan and shared some of their best memories.

Stephen Moyer, Nelsan’s longtime co-star on True Blood shared, quite possibly, the most emotional but incredible tribute yet, and it was a true testament to Nelsan’s character. The photo was one that showed everything that Lafayette stood for and the way he radiated joy. 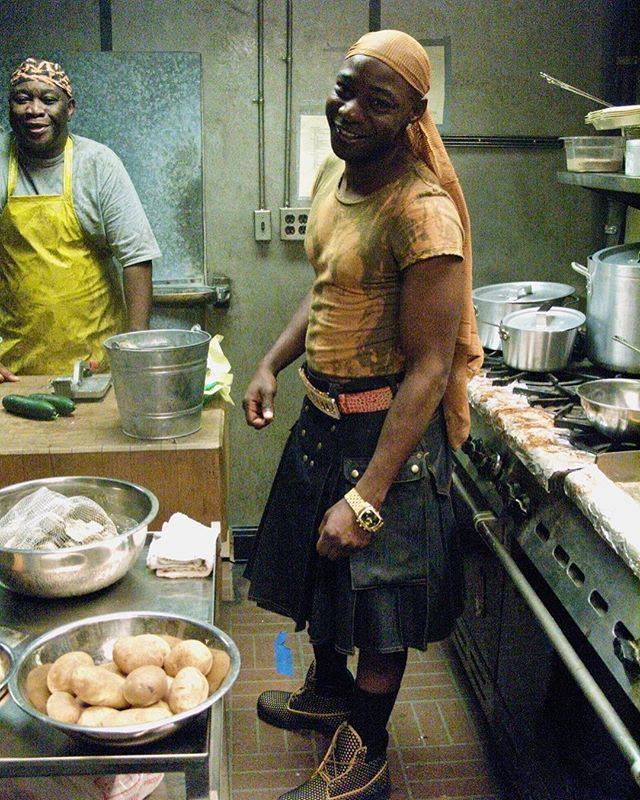 ‘One of the first places we shot on the pilot of True Blood was Sam Merlotte’s Bar.
The kitchen Suzuki Ingerslev built in Merlotte’s had a walk in freezer & working gas burners. It remained my favorite set throughout all 7 seasons – when shooting in Louisiana many months later she took us to the actual bar she had used as inspiration. It was almost as amazing as our Merlotte’s, but not quite – They didn’t have a Lafayette.
In the scene that was being shot that day, Lafayette, a male cross-dressing short order cook in the show, was expounding on his theory of men’s fear of the female anatomy.. specifically, the vagina. ‘I know every man whether straight, gay or George MotherFuckin’ Bush is afraid of the pussy..’
I’m not sure I have ever seen, before or since, people crowd around a monitor at video village with their hands clapped to their mouths from shock, sheer laughter and wonder as the actor playing Lafayette jiggled and shook and humped the butcher’s block to get his point across. it was completely original, funny, sardonic, risqué and brilliant.
That was Nelsan Ellis. All of the above.
I turned to Alan Ball when the scene was finished and whispered… ‘you can’t kill him!’ (Lafayette’s death at the of the first book is the cliffhanger that leads to Book 2… )
Nelsan Ellis was the only actor in the 7 years of True Blood whom Alan allowed to improvise. Actually, I’m going to take that back. It wasn’t that Alan allowed him to do it, it was more that when Nelsan inhabited the world of Lafayette, he quite literally COULDN’T STOP himself. It was like he was possessed.
In actuality, Nelsan was quiet, smart, thoughtful, warm and kind. A published playwright himself.
I think it would be fair to say that he taught all of us that intent and courage and fearlessness and freedom are the aspects of playing make-believe that spark the corners of the room where the dark is most impenetrable; to shine a light on those corners within ourselves is the very reason we go back time and again to Movies, TV shows, and Theatre. To see that spark ignited.
Nelsan had that electricity in an abundance I have rarely seen. I can’t believe he’s gone. #nelsanellis’

The post brought many readers to tears, with those who had worked with Nelsan before agreeing with what Moyer said and with fans thanking him for giving us a look into what made him so absolutely brilliant.

That brilliance is clear in this scene where some ‘drunk rednecks’ refuse to eat a burger crafted by Lafayette.

We’ll miss Nelsan’s contribution to entertainment, and we hope his friends and family find solace in watching these scenes and knowing what a legend he was at such a young age. His legacy will continue on.