If there is one man that can surely say that he had a heck of a successful year in 2017, it is Stephen King. After releasing two films in the theaters and pushing out a novel with his son Owen, the name ‘King’ certainly circled the media with positive consistency this past year.

Although there may not be major blockbusters arriving in theaters that were inspired by his works this year, the New York Times Best Selling Author has no plans of slowing down in 2018.

On May 22, Scriber will release the latest novel by the author titled ‘The Outsider’. The novel will be approximately 576 pages, this is a novel full of twists and suspense that you will be dying to get your hands on.

“An unspeakable crime. A confounding investigation. At a time when the King brand has never been stronger, he has delivered one of his most unsettling and compulsively readable stories.

An eleven-year-old boy’s violated corpse is found in a town park. Eyewitnesses and fingerprints point unmistakably to one of Flint City’s most popular citizens. He is Terry Maitland, Little League coach, English teacher, husband, and father of two girls. Detective Ralph Anderson, whose son Maitland once coached, orders a quick and very public arrest. Maitland has an alibi, but Anderson and the district attorney soon add DNA evidence to go with the fingerprints and witnesses. Their case seems ironclad.

As the investigation expands and horrifying answers begin to emerge, King’s propulsive story kicks into high gear, generating strong tension and almost unbearable suspense. Terry Maitland seems like a nice guy, but is he wearing another face?.”

“When the answer comes, it will shock you as only Stephen King can,” the book promises. 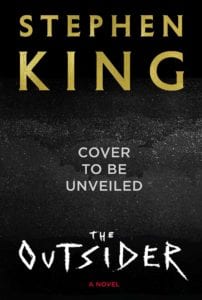 Time for us to head to the book store and make our reservations!

FAN FEST EXCLUSIVE INTERVIEW – Jeremy Ray Taylor talks playing Ben in ‘IT’ and being a part of the Stephen King World!

Home » Featured » Stephen King’s Newest Novel, ‘The Outsider’ will be Released in May