With the season 8 premiere of The Walking Dead on the horizon, which will also be the series’ 100th episode, the cast and crew are giving fans so much in terms of what matters most to them.

The Walking Dead didn’t just unite fans across the world, it made a family of the cast and crew and all of us are lucky enough to be part of it too. From the very first episode where Rick woke up and had no idea what had happened to his world to the season 7 finale where Negan finally saw what he’s truly up against, it’s been an incredible road so far.

However, the 100th episode isn’t just a stand point, it’s a turning point. It’s going to lay the groundwork for the next 100 episodes and we can’t wait to see what’s in store.

The cast decided to tell fans what they hope to see in the next 100 episodes and from sincere answers to the funny ones – we’re on board with all of them.

For Lennie James, he wants what we believe a lot of fans of TWD want: to see Morgan in a state of vulnerability from allowing himself to love someone again. 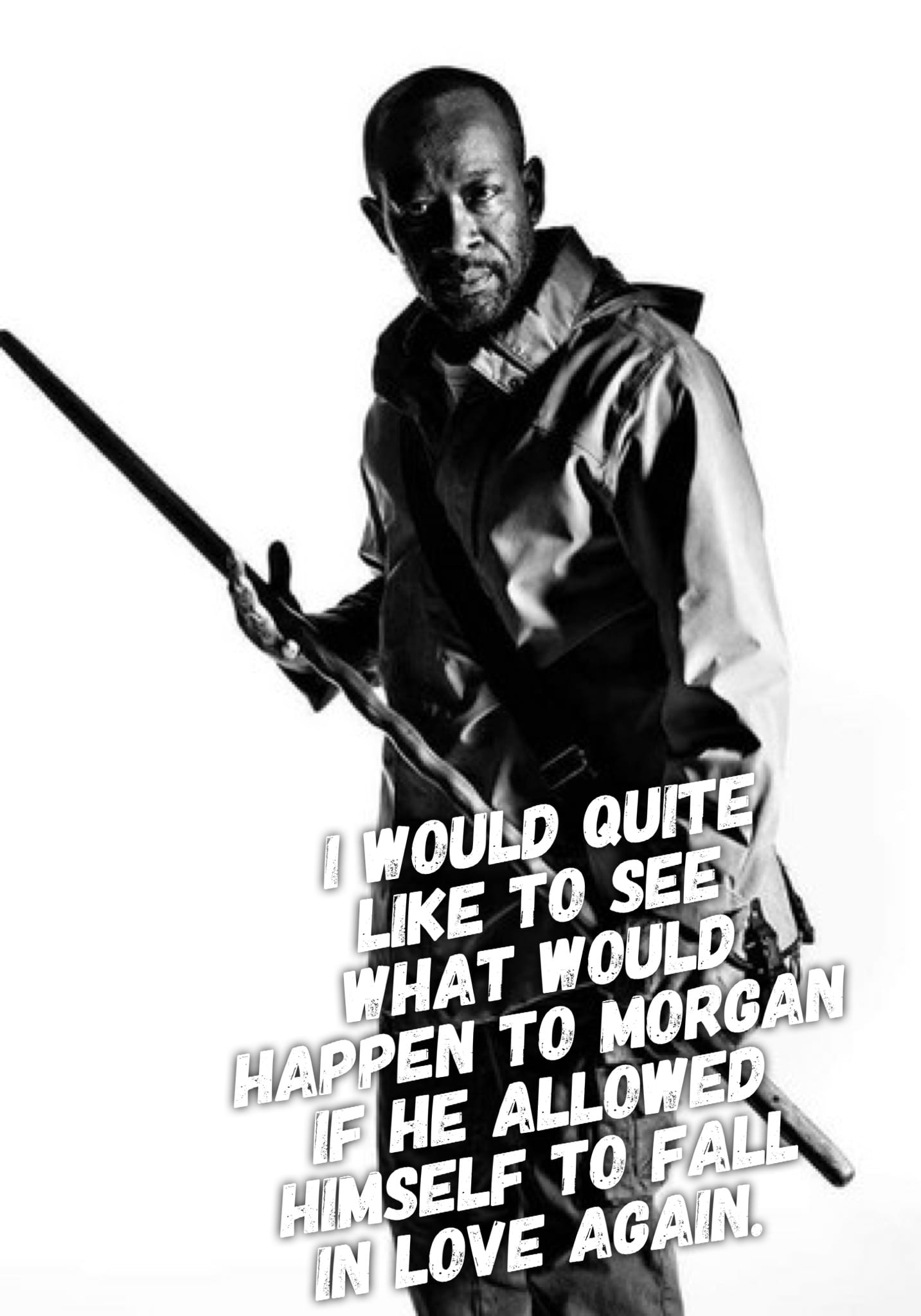 Andrew Lincoln is looking for something a little, less stressful in the next 100 episodes. Or at least, a few things to help distract from that whole zombie apocalypse thing. 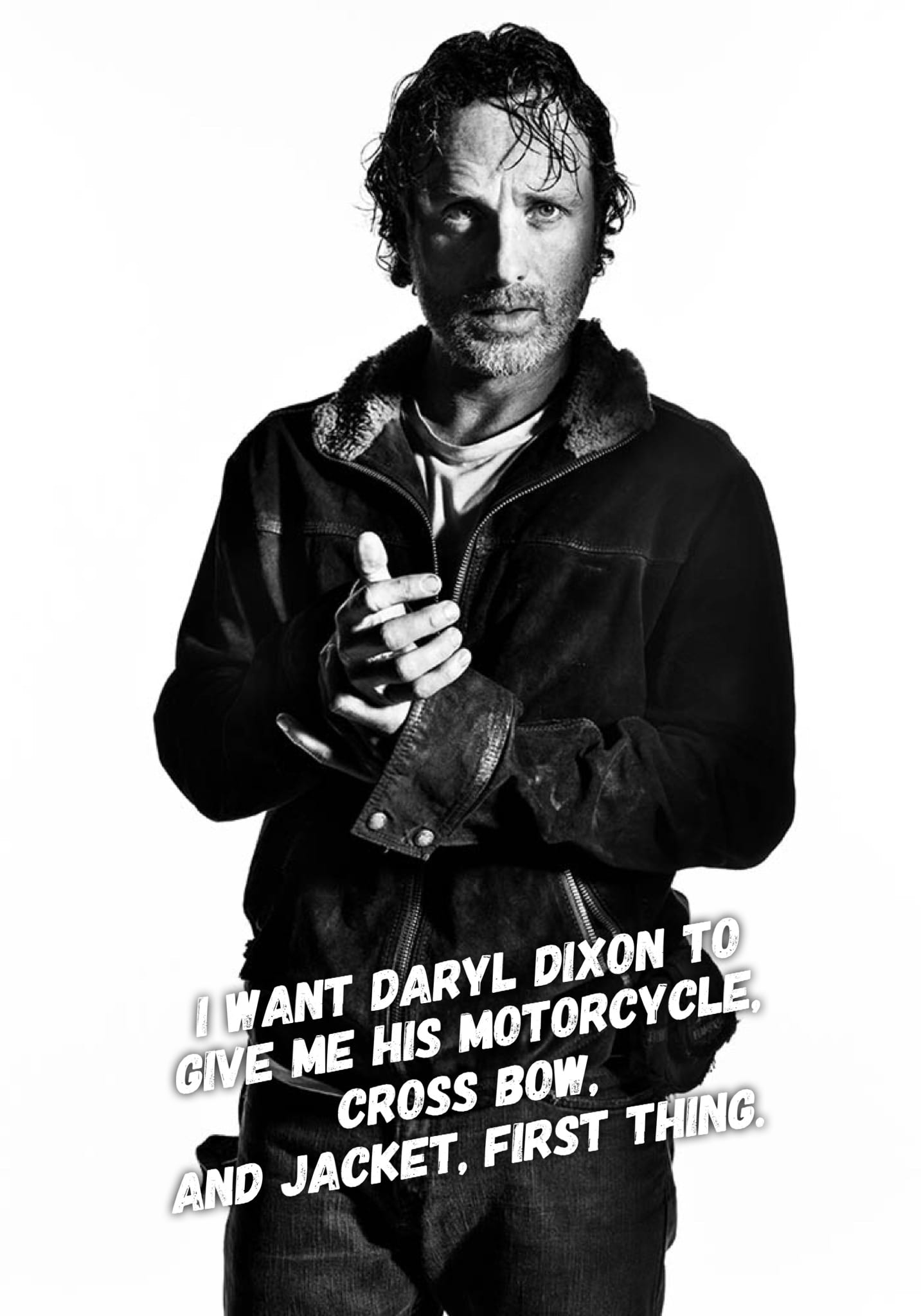 ‘I want Daryl Dixon to give me his motorcycle, cross bow, and jacket, first thing. That would be my sort of Christmas when he gives it to me. And for the kid to take over the reins and so I can kick back and play computer games for a couple of seasons with Eugene. So maybe a few more laughs and a few more beach scenes.’

For Norman Reedus, well, he wants what we all want. Less crying and more puppies. 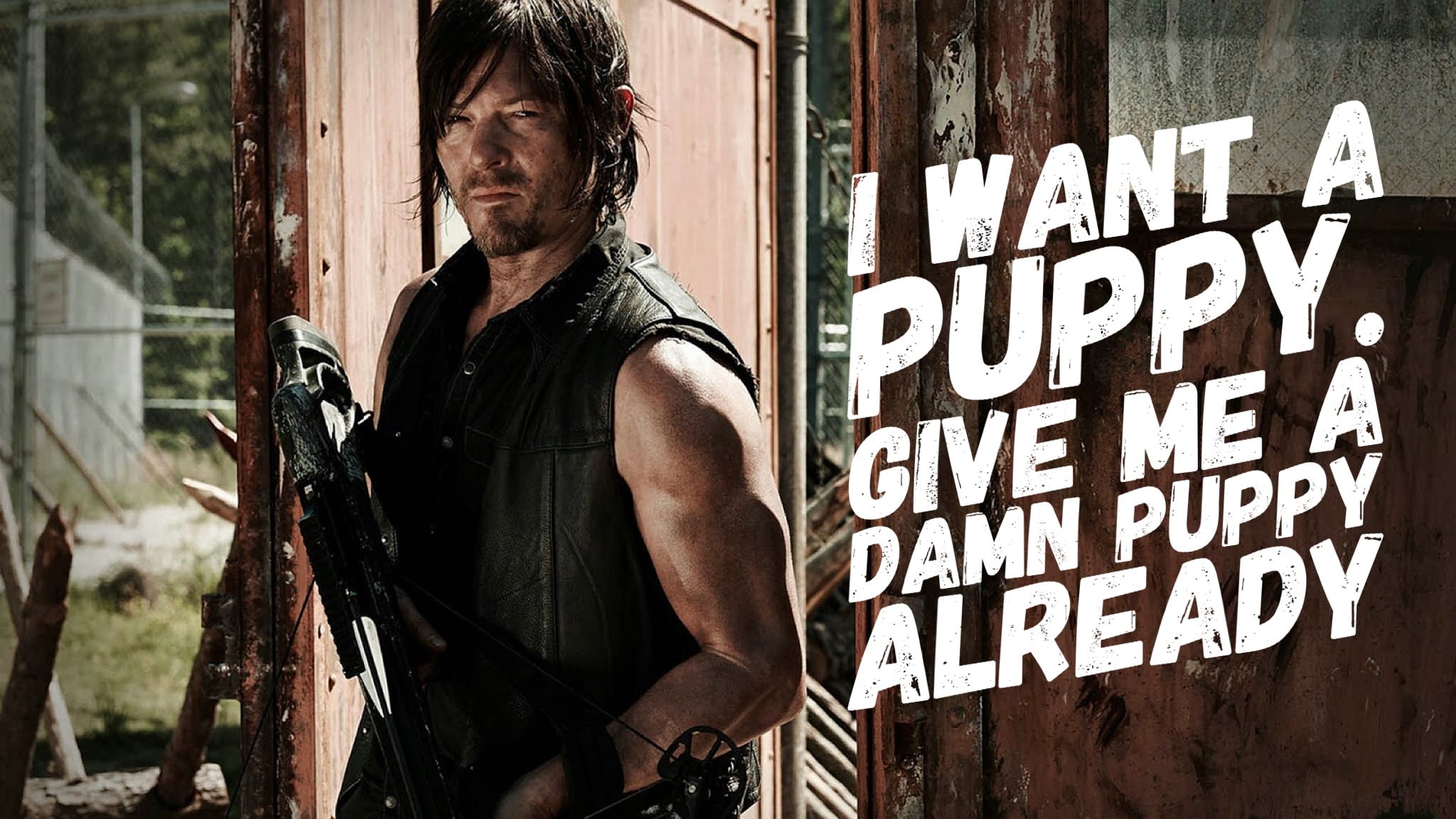 ‘I want a puppy. Give me a damn puppy already! That would be good. I’d also like more scenes blowing up stuff with bazookas. Those are always fun. Certain characters are really connecting, and you know, those are my favorite scenes to do, so more of those, please. I like the fighting scenes. So less tears, more puppy.‘

Tom Payne is hoping that the series follows the time Jill and along with that, he gets a top knot. He also gets armor and a horse. So we totally get it. 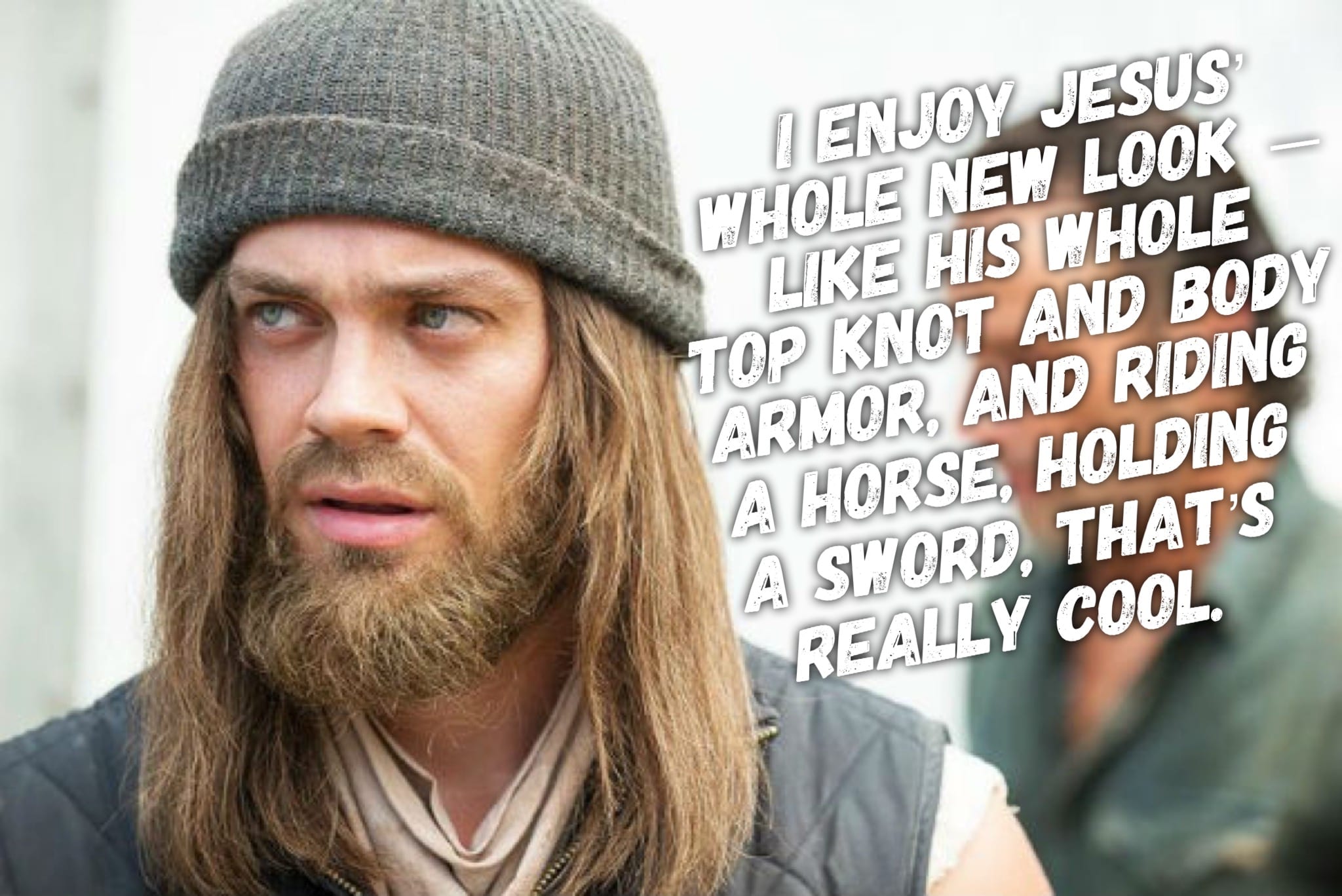 ‘Well, I read the comic books, and if we do the time jump I enjoy Jesus’ whole new look — like his whole top knot and body armor, and riding a horse, holding a sword, that’s really cool. And he’s a bit bigger as well. I’d like to get back to the gym and change myself up a little bit and change the look. That would be really cool. That would be like a whole new change and would be really exciting I think. And it’s just an opportunity for those characters to have really grown as well because actually, not much time passes on the show. So yeah, I think the show would benefit from a big change, and I think after the war maybe they’ll need it, you know? Oh, and also I would like to kill a bunch of people.‘

Danai Gurira wants Michonne to channel her inner G.I Jane, and then to solve the issues in what’s left of the world in this really awesome way. It involves a beauty parolr and golfing to figure out your issues. Seriously, we’re game. 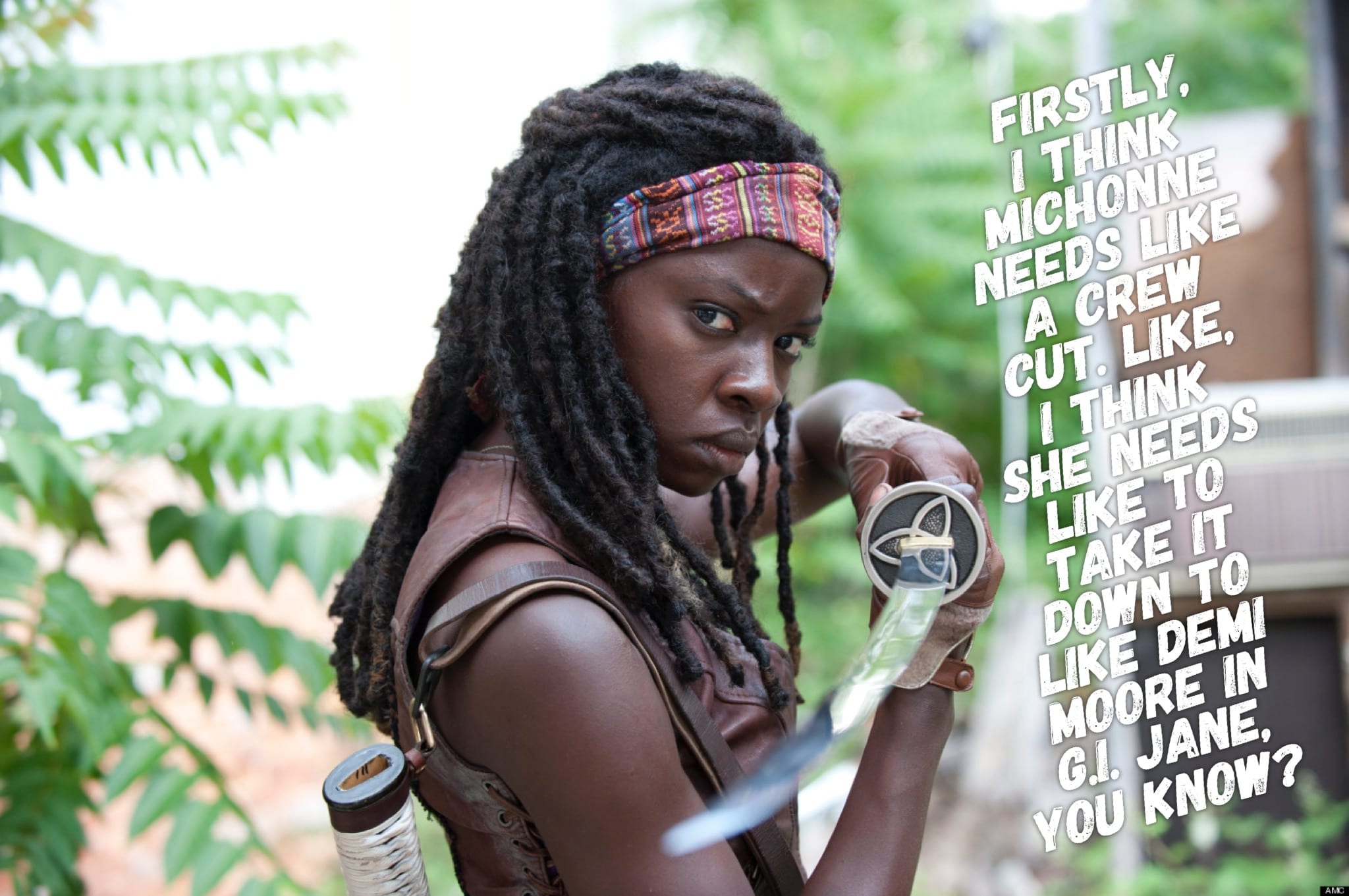 ‘Firstly, I think Michonne needs like a crew cut. Like, I think she needs like to take it down to like Demi Moore in G.I. Jane, you know? Something like that. We need to get that going. I also think Michonne should have this sort of superhuman evolution thing happen where she has triplets in, like, four months — helping to repopulate, you know? We’ll get that going. We don’t need no nine-month pregnancies. That’s way too long! So let’s just figure out how to quicken up that process. Evolution’s happening at the same time as the world is ending. You know how it goes. And then I think Michonne should open a beauty parlor, but it should also be like a golfing resort, and it’s where she brings the enemies. Instead of fighting, they golf to figure out their issues, and so she sets that up, and if they lose the golfing match, they have to go work in her spa, and they have to give up their little domain. Cool stuff.‘

Melissa McBride wants some essentials for Carol, and we get it. We panic if we lose our chapstick, and just because zombies are threatening humanity, well, it doesn’t mean you can’t take care of your lips and skin! 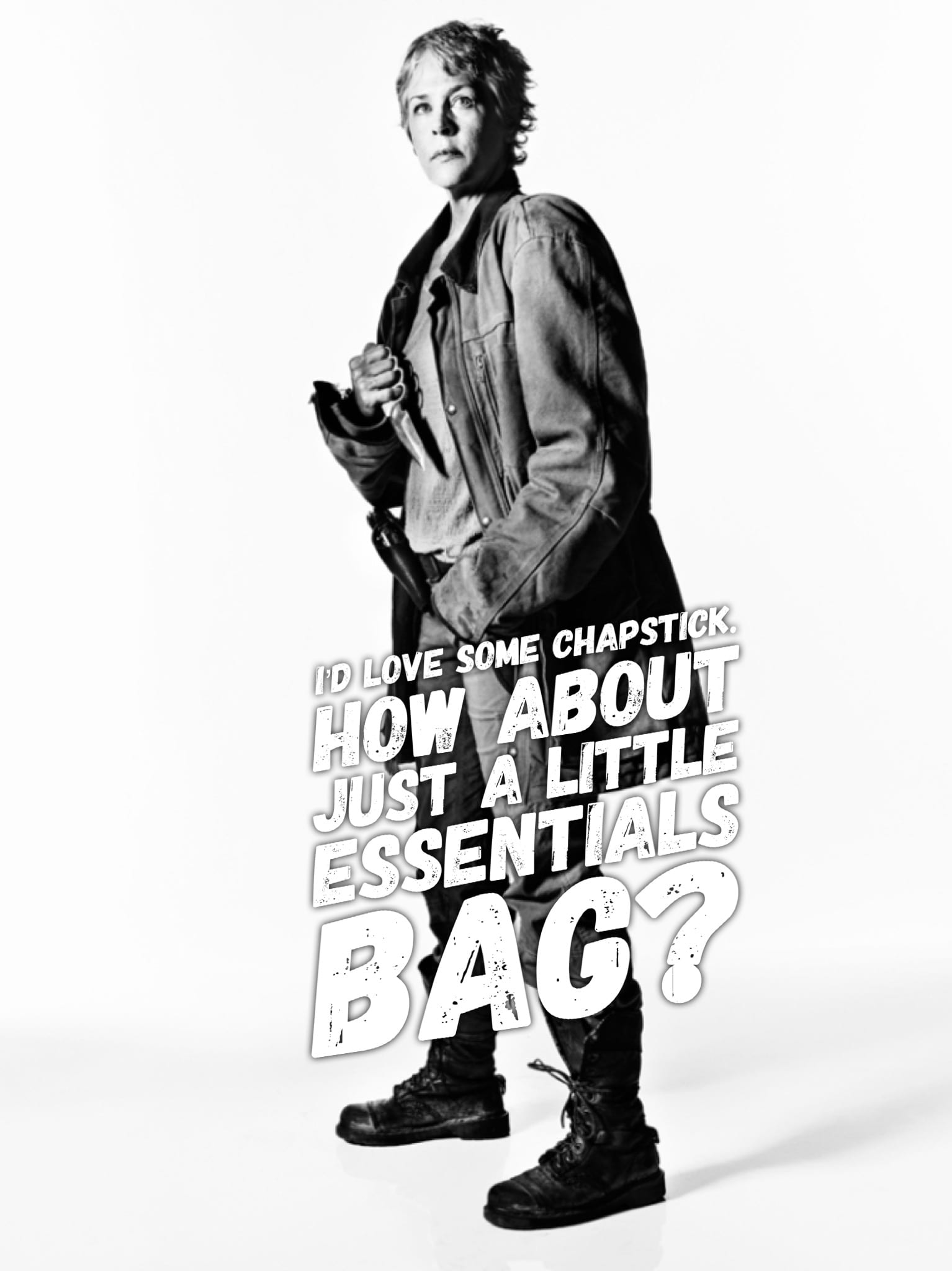 ‘I’d love some ChapStick. How about just a little essentials bag? It would be some sunglasses and a ChapStick, some sunscreen, and maybe a couple of hair pins and hair combs. I would also love to have a sit-down conversation with one of the characters about how utterly bizarre our life has become. Oh, and the other thing is I would like to hear: What is this virus? What’s going on with that? What is this thing? Is there any end in sight? Is anybody looking into that somewhere in the world? How far has this gone?‘

If you ask Lauren Cohan, she’s done with the whole apocalypse all together and she’s ready for Maggie to embrace her inner mermaid, and to totally become one. 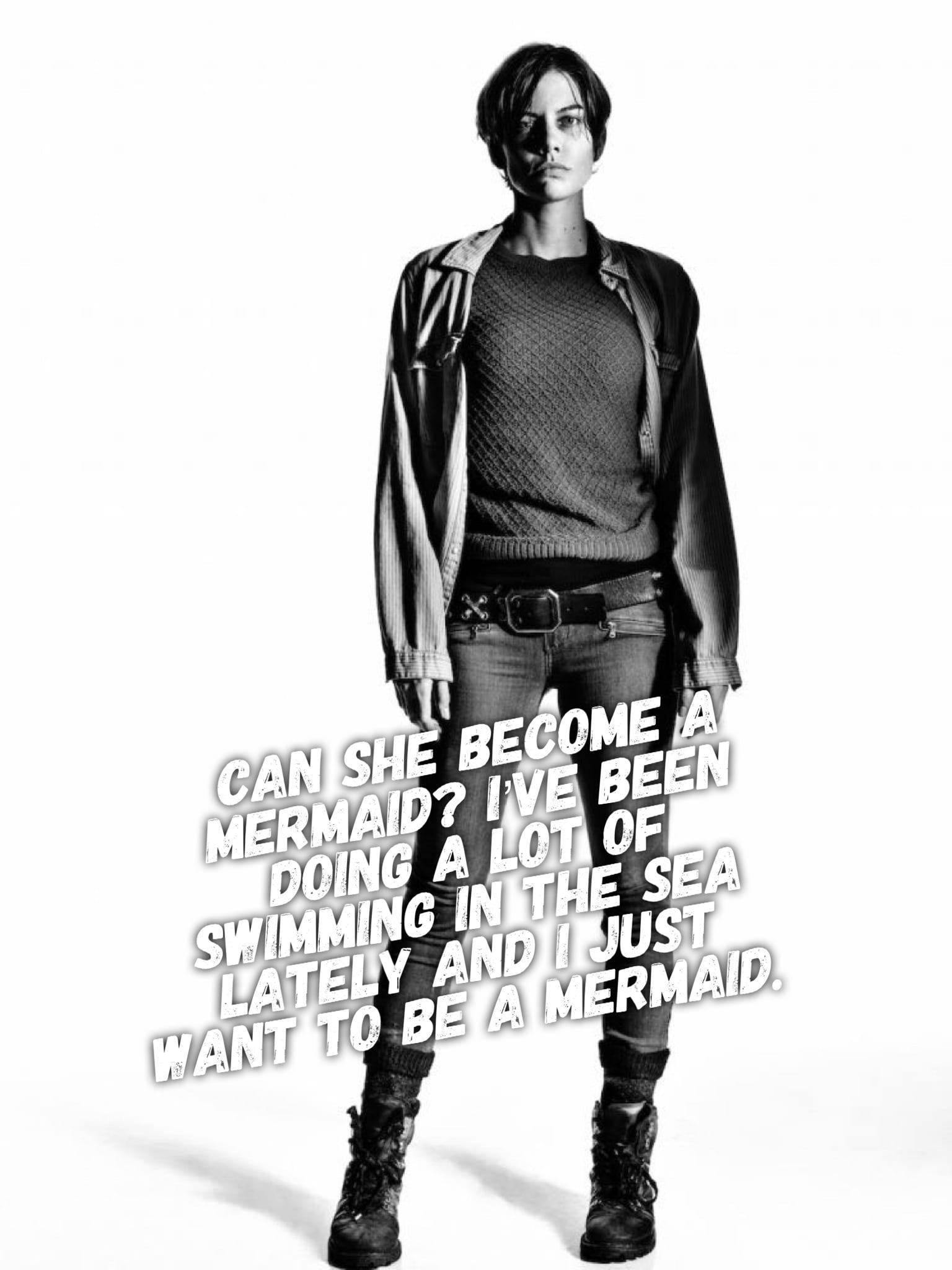 ‘Can she become a mermaid? I’ve been doing a lot of swimming in the sea lately and I just want to be a mermaid. I guess it’s going to be about Oceanside. It would also be great if she could have a really healthy kid and find a beautiful life. I really want her to have a healthy kid, to make some more friends, and to find some peace. And you know, as always, good weather.’

You can read what the rest of the cast said at EW and stay tuned for some great articles leading up to the 100th episode. It’s a monumental moment and an incredible time to be part of The Walking Dead family.