It is a magical day for Starbucks fanatics and mythical creature enthusiasts everywhere! Over the next couple days, you can try out the brand new ‘Unicorn’ Frappuccino! Participating Starbucks in the U.S., Canada and Mexico will offer the drink through the end of the week.

Naturally, the first thing I did when I woke up this morning was rush to my local Starbucks (and by rush I don’t mean drove over the speed limit out of excitement or anything…) and got to try out the colorful whipped beverage myself! I have to say, it is quite delicious!

So what exactly is the ‘Unicorn’ Frappuccino?

The beverage “is made with a sweet dusting of pink powder, blended into a crème Frappuccino with mango syrup and layered with a pleasantly sour blue drizzle. It is finished with vanilla whipped cream and a sprinkle of sweet pink and sour blue powder topping,” the company stated, in a press release.

Starbucks is no stranger to releasing themed Frappuccino’s to the public. Earlier this year, they released a Pokémon Go themed one, as well as a ‘Frappula’ Frappuccino during Halloween.

The limited time Frappuccino can be enjoyed from April 19th to April 23rd.

So get out there and grab this delicious frapp! As you can tell, Nick, our Director of Creative Content, is completely mesmerized by this mystical wonder 🙂 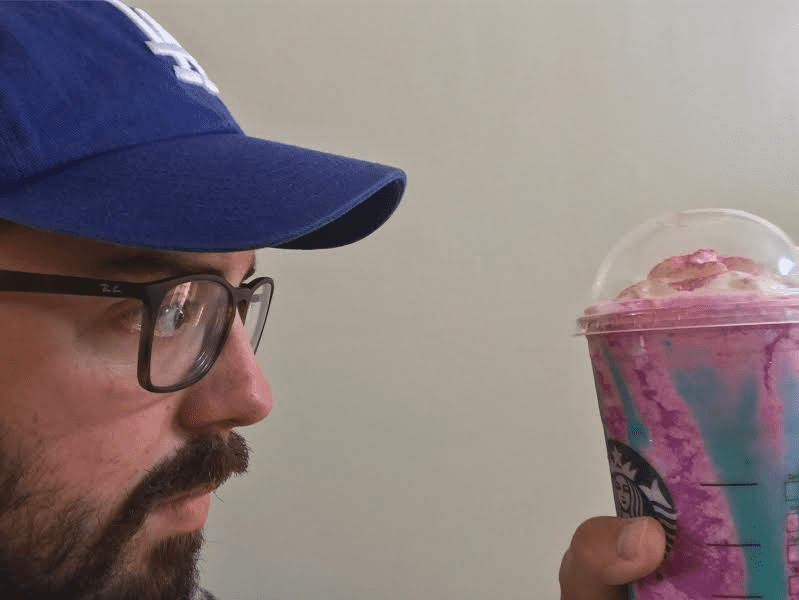