How much do you love Star Wars?  Have you ever wished you could be a part of the Star Wars universe and maybe even hang out with some of your favorite characters?  Thanks so a brand new augmented reality game, you can get to do just that!

Two years ago, in an effort to promote the film The Force Awakens, Star Wars hosted something called Force Friday.  Force Friday was part of a retail push which helped launch a new line of merchandise and products associated with the new film.  This year, Force Friday II is here to kick off promotion for the upcoming Last Jedi film.

Force Friday II will kick off globally on September 1st and will be the start of another push to unveil all kinds of Star Wars themed products including the new augmented reality game Find the Force.  Think Pokemon Go meets intergalactic space travel throughout the Star Wars universes.  Find the Force will allow fans the chance to participate in an actual treasure hunt!

From September 1st through September 3rd, fans spanning across 30 countries can download the game app and visit over 20,000 retail locations.  Specified locations will be marked with a Find the Force logo and, upon finding the logo, fans are to scan it using the app in order to unlock their favorite characters.  Once unlocked, fans can then take photos and create videos for sharing on social media.

Pretty cool, right?  There will be 15 characters which fans can unlock including one brand new, never before seen character that will be featured in the upcoming Last Jedi film.

For more details on Force Friday II and Find the Force, you can visit the Star Wars website.  Though the event officially kicks off on September 1st, you can download the Star Wars app right now for a sneak peek!  Once you download the app, just scan the logo photo below to see what it unlocks! (Here’s a hint: PORGS!)

Star Wars: The Last Jedi will hit theaters December 15th.  Good luck with the treasure hunt and may the force be with you! 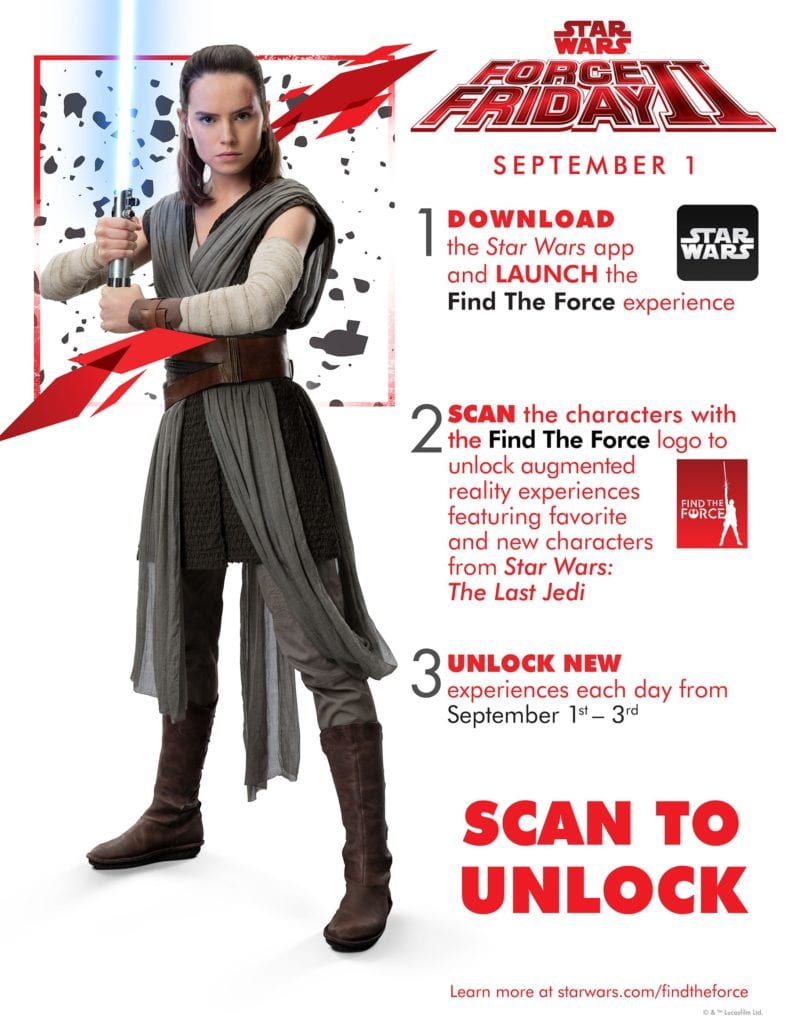