There is a new darker, even morbid explanation for a scene in Return of The Jedi that some used to believe was adorable.

In Star Wars: Return of the Jedi, Princess Leia and the Ewoks seemed to really get along. Unlike Luke, Han and Chewbacca, they didn’t tie her up when they first see her. She’s taken to their treetop home, and given a dress to wear.

A franchise fan recently pointed out the darkness in the façade of kindness shown to Leia by the Ewoks, and everything is connected to the dress the Ewoks gifted her.

User ‘premeddit’ on Reddit, posted two major facts about Return of the Jedi. The first one is that Ewoks eat people. They worship the robot, C-3PO as their god (because they can’t cook metal), and during the banquet to celebrate him, they tie Luke and Han to a rotisserie and attempt to roast them for the banquet dinner. 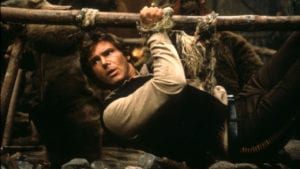 The second part of the realization, is that the Ewoks seemingly gifted Leia dress made from their native Endorian material.

They had the dress made for humans before Wicket took her to the village.

Although it’s possible that Leia had a dress with her, there really wasn’t a reason for her to change into it. Also, the Ewoks didn’t seem like expert sewers, judging by their tattered outfits. This begs the question-where did the creatures get the dress? Perhaps they held another human woman in captivity until they disposed of her by eating her.

In the Ewoks movie, we learned that it wasn’t the first time that humans explored Endor. Therefore, although the theory is dark, it’s based on real Star Wars lore, and the fact that the Ewoks were clearly roasting the two men.

Do you think that the Ewoks eat humans?

Here is the clip in question, if you need a refresher. (Or an excuse to watch it)