The upcoming CBS series Star Trek: Discovery will definitely be making some nostalgic call backs to details from earlier in the franchise and, it looks like they might even eventually experience some tribble trouble at some point within the series.  According to Cinemablend, the fuzzy, troublesome, rapidly reproducing aliens may be making a cameo in the new series.

Co-creator and executive producer Alex Kurtzman dropped the tribble truth during a press conference at San Diego Comic-Con recently.  When asked if the lovable and adorable, menacing furballs would be making their way to the new series, Kurtzman simply replied, “Yes, Tribbles, yes.”

Tribbles first appeared in 1967 during Star Trek: The Original Series episode named The Trouble with Tribbles.  Often shown purring, they are actually an invasive species with an extremely high rate of reproduction.  Though they only needed a short amount of time to take over the Enterprise and their time on screen was limited, regardless, they were quickly loved by fans and became a popular reference when discussing the series.  Just look at how adorable they are:

Since the new series is said to take place a decade prior the original series, where the little fuzzballs made their debut, it is currently unclear as to how the tribbles will fit into the Star Trek: Discovery universe but we are loving this call back to the original series!

What do you think of tribbles possibly making an appearance in the upcoming CBS series Star Trek: Discovery?  Let us know your thoughts in the comment section below and make sure you check out this hilarious Taylor Swift parody paying tribute to the troublesome tribbles: 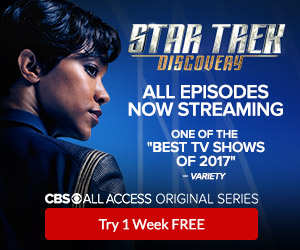