The original Spyro trilogy is back with stunning new visuals, remixed musical magic and of course a few challenges along the way. Of course there’s always the Trophy Achievements for bragging rights, but Toys For Bob spiced it up a bit by bringing back Skill Points that upon completion unlock concept art for the game’s various worlds and enemies. This is something I haven’t seen in heavy rotation since the PS2 days – and hopefully this marks the comeback – but how do you complete these challenges?

Whereas most of these are self-explanatory, some are a bit more cryptic and require some finely honed skills. So here are some Tips & Tricks to keep in mind while trying to unlock every ‘skill point’ in Spyro: Reignited Trilogy.

I once heard someone compare the difficulty of bosses in the new Spyro game to Dark Souls… seriously. Though whereas this is FAR from an accurate depiction of difficulty, the premise of Dark Souls boss battles can be applied here for completing the Perfect challenges – learn their moves. For example, Dr Shemp has a set attack depending on which platform he’s on. Crush & Gulp’s basic attacks simply require you to run and their specials are all telegraphed. Learn the timing, see what works / what doesn’t and you’ll perfect them in no time! This advice also helps with challenges like taking no electrical damage in Terrace Village.

Thankfully there’s no time based flight challenges for the first game, but this might actually be on purpose due to controls. You see, flight differs a bit game to game – especially the 1st to later games. So when you do any challenge focusing on flight/ mechanics, don’t go into it with last game’s mechanics. For example, on Playstation the Triangle button cuts your flight short in Game 1; but in later games it gives you a big boost in height before descending. So if you played Ripto’s Rage all day and want to tackle some of the challenges from the first game, don’t be surprised when your timing is way off. This is especially important with challenges like 3 Laps of Supercharges in Fracture Hill as there’s no real place to train for this in the other games. Just keep practicing in the environment you’re already in.

Now once you have learned the moves, you’ll need to know the proper order in which to tackle the timed challenges. Below is the list per challenge.

Another difficult mechanics based skill point is in Charmed Ridge ‘The Impossible Tower’.  As you go through you’ll spy a dragon egg on a raised platform next to a Cat Wizard. This egg contains the dragon Moe. Once there, you’ll need to jump up the set of wood beams/ railing on the side. This will give you enough height to JUST make gliding to that solo tower a little ways away from the main path. In order to make this jump you’ll need to have mastered perfect timing for running rum, flying at TOP of your jump and the hover boost. 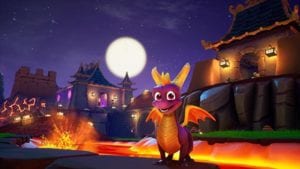 As you go through the game naturally collecting all the Gems, Dragons, Eggs you’ll complete most of these challenges without realizing it. Such example of these are “Reach tricky platform” in Artisan. Others however are a bit more challenging and require some hunting. What follows are the trickiest to find:

Dedicated Attempts – Do ‘This’ to ‘That’ Thing:

While many skill points you’re complete naturally, some require you to at least know what to look for because they can be missed and/or timed out on one play through.

Hopefully these tips and tricks helped solve any problems you had with skills points, but if there’s one that’s still troubling you sound off in the comments below and I’ll try to add it! Special thanks to TomsGuide for helping my initial play through with some these Skill Points. And of course, thank you as always to Toys for Bob/ Activision for bringing back this classic gem!