We’re inching ever closer to the release of Spyro: Reignited, and he recently celebrated a birthday!

To celebrate, the game’s Twitter account tweeted a cute little video on September 9th, which starts out with Spyro flying in-game, and he runs into a dragon who is holding a birthday cake. Cool as he is, he then licks his little paw and slicks back his yellow hair. Spyro then blows out his birthday candles, making it the most adorable birthday party I’ve ever been at.

Happy Anniversary to everyone’s favorite purple dragon. Thanks for being the best fans for the past 20 years! #spyro20th pic.twitter.com/MV7oErKU1E

If you were a kid in the 90s, Spyro probably makes up a huge chunk of your memories. Those little feet pitter pattering across the grass is simply music to our ears. 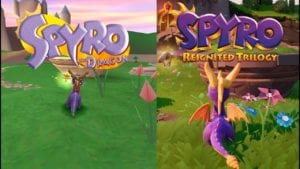 Here is a timeline of every Spyro Game that exists, with Spyro Reignited added in as well:

Pretty soon, we’ll be transported back to the same beautiful landscapes we were first wowed by on our beanbag chairs in 1998, and they’ll be crystal clear.

This time, our parents probably didn’t buy the game for us and we’ll barely be stopping to order postmates to fuel our gameplay, but that’s okay! Spyro came back to play with us, even as adults!

Toys For Bob and Activision’s Spyro Reignited releases on November 14th for Playstation 4 and XBox One.

Home » News » Spyro Blows out his Candles for his 20th Anniversary