The new Netflix original Space Sweepers, directed by Jo Sung-hee, brings dazzling sci-fi spectacle to its earthly story of loss, strife and morality; making it one of the finest entries into the genre over the last few years. Think Cowboy Bebop crossed with Elysium and you’re halfway there.

The year is 2092 and Earth is borderline uninhabitable. UTS, a mega-corporation led by the philanthropic James Sullivan (I thought Monsters Inc. too), is constructing a new home for humanity in orbit; Eden. Here, life can thrive once again under a utopian paradise but ironically, space is not infinite; only the chosen can ascend to Eden. 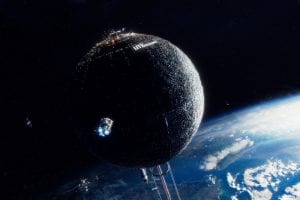 Much like Earth, space is no walk in the park. Conditions can be harsh as civilians struggle to make ends meet. Overseeing the populous is UTS’s Space Guard; a multinational group of elite police, keeping order through fear and force. If your visa is expired or you can’t pay your debts, expect a visit from these armoured enforcers.

Desperate to stay off the UTS radar is the Victory. A ship designed for collecting space debris, this dangerously competitive line of work rarely has the reward outweigh the risk. Crews intercept objects at blistering speeds whilst fending off rival sweepers, everyone’s vying for the best booty like a bunch of intergalactic pirates. 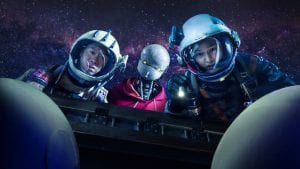 Aboard the Victory, is the film’s band of anti-heroes. Captain Yang (Kim Tae-ri) is chief pilot and decision-maker, Tiger Park (Jin Seon-kyu) is a certified badass acting as the muscle and engineer, Bubs (Yoo Hae-jin) is the ex-everything robot assisting in any way he can, and finally, Tae-Ho (Song Joong-ki) the main character, is a father desperately trying to reconcile a tragic past.

Things take a turn when the Victory picks up a rogue shuttle carrying a young girl. Turns out, this girl has been reported missing by UTS and they very much want her back. So much in fact, that the crew devise a plan to offer a ransom, thus solving all of their financial woes. Of course, a litany of new problems find their way onboard. 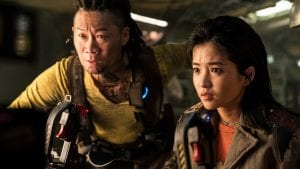 The story unravels at a constant pace for the roughly two-hour-twenty-minute runtime, which arguably could have been a touch shorter, but Space Sweepers is so enjoyable that by the end, I wouldn’t have minded it being ten minutes longer.

Woven into the action-packed sequences and story progressions are subtle observations on class, wealth, poverty and greed but Jo Sung never lets these take precedence over the fun. Instead, the ideologies serve to enrich the world that Space Sweepers resides in and ultimately, making them more powerful for it. 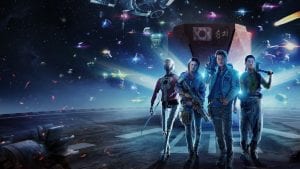 Front to back, the whole experience is incredibly polished, surprisingly so even. The CGI is slick in its presentation of this nuanced, detailed sci-fi world. The direction is snappy, focused and purposeful, always keeping us right where we want to be and the actors keep it all moving confidently and capably. One of the great things with Space Sweepers is the vast cultural presence onscreen. In keeping with the futuristic tech, the characters all wear earpiece translators so regardless of nationality or language, they understand each other. This tool allows for a truly multicultural experience and it’s great to see.

With its loveable debris snatching crew, the Victory lives up to its name both on and off the screen. Korean director Jo Sung-see has delivered a dazzling sci-fi spectacle that stands as not only one of Netflix’s finest entries onto the platform but also, one of the genre’s best in over a decade. I feel a cult-hit brewing with this one.

Self proclaimed “word octopus” and avid language enthusiast. Working as a copywriter, blogger and screenwriter.