Petyr “Littlefinger” Baelish learned the hard way that you don’t come between the Starks. His plan to turn Arya and Sansa against each other totally and satisfyingly backfired as the two had been conspiring against him the entire time. Littlefinger’s death excited fans so much because honestly, he deserved to die seasons ago and it was perfect to see the Stark’s bring him to justice, especially Sansa. Just in case you forgot here’s a quick rundown of some of his wrongdoings:

Of course, there will always be some Littlefinger apologists, but there is one person who is not here for it – Sophie Turner. Turner plays Sansa Stark on the hit show and her storyline has been the most intertwined with Littlefinger’s and one of her character’s worst arcs came to be because of him. She took the time to totally clap back at someone who tweeted that Littlefinger “never hurt Sansa”. 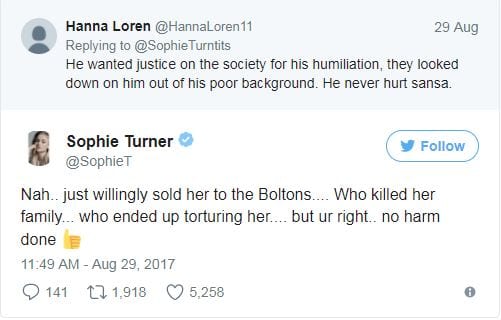 Honestly, Ramsay Bolton is a literal mic-drop end of discussion for anyone who tries to defend Littlefinger. The fan continued but was met again by Turner’s clarification. 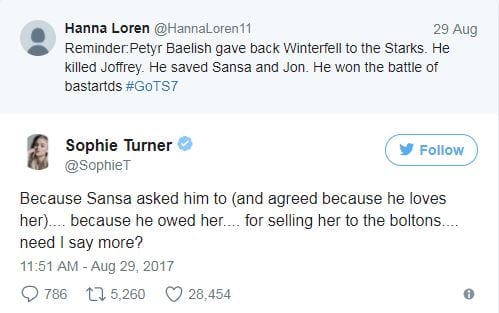 With that tweet – case closed. While Littlefinger was a smart man who used his intellect and smooth talking ways to last seven seasons and start a literal Game of Thrones, he caused way too much pain and suffering for the Stark family and deserved to be killed for his crimes. So, at the end of the day don’t come for Sansa Stark or Sophie Turner.

More on Game of Thrones:

A Little Recap About Why Littlefinger Was the Worst