Fans are a few episodes into the new season of Chicago P.D. and as great as it is to be reunited with Voight and the gang, there is one familiar face that’s missing. It was announced back in May by Law and Order and every other law show on NBC EP Dick Wolf that Sophia Bush would not be returning as Detective Erin Lindsay for the show’s upcoming fifth season. Since that news broke, Bush has been fairly quiet on her reasons as to why she decided to leave the show so abruptly. Recently, however, Bush took to Instagram to shed some light on her decision to leave the Chicago Fire spinoff.

When an Instagram user commented that Bush’s new deal with FOX, which would secure her a lead in an upcoming comedy or drama pilot and allow her to develop additional projects with a producer credit, may have been the reason she decided to leave, another user commented that P.D. forced her out. This is when Bush decided to step in. 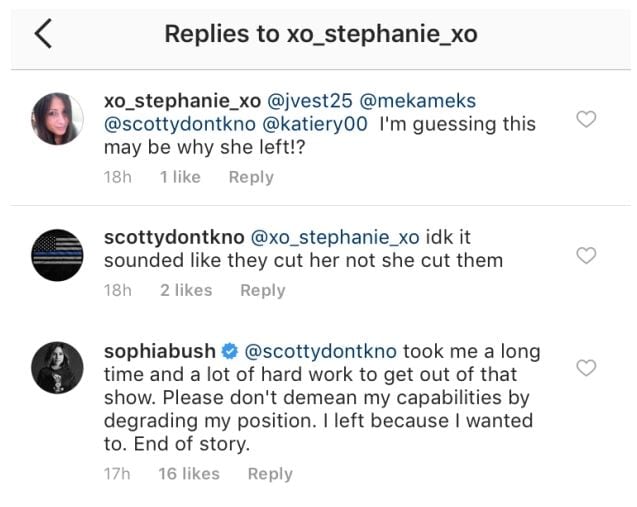 She said “[it] took me a long time and a lot of hard work to get out of that show. Please don’t demean my capabilities by degrading my position. I left because I wanted to. End of story.” This comment also lines up with what producer Dick Wolf had told the Television Critics Association this past summer that Bush had “wanted to leave”.

While Detective Lindsay is sorely missed on the show, Sophia Bush fans won’t have to wait too long to see her back on the screen with her upcoming FOX deal. She is also currently in Marshall, which is in theaters, and will appear in the upcoming Acts of Violence.

Home » Featured » Sophia Bush Finally Speaks Out on Why She Left “Chicago P.D.”