The writing just keeps getting better on Sleepy Hollow. You know it’s a good week when none of my MEMEs are about Crane’s eyebrows or gourmet pastries, and I only use “Ee-vil” once in my recap! Although I think all fans will be disappointed if we don’t see Crane eat a cruller at least once this season. Get on that, Sleepy Hollow writers. 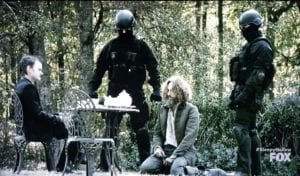 This week a fire virus spread through a viral video has infected Washington. The opening scene shows Dreyfus’s vision, a flash forward to America under his tyrannical rule, with a haggard, aged, Crane, dragged before the maniacal leader. Malcolm contends Americans don’t want to think or rule themselves. Crane is a broken patriot. Finally, we have an interesting bad guy. 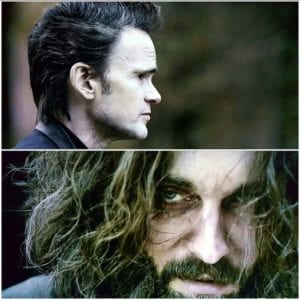 The chemistry continues to build between actors in current day. Molly and Crane discuss the art of the selfie while Molly waits to fangirl over an internet celebrity. Crane even makes a great joke about the generational gap. “Your generation is so weird,” insists Molly. “My generation? People try to put us down. Just because we get around,” tempts Crane. Molly who is three generations removed from that reference, says, “What?” And Crane clueless to her ignorance, relies “Who?” Trends move a might faster through the generations than in Crane’s day. 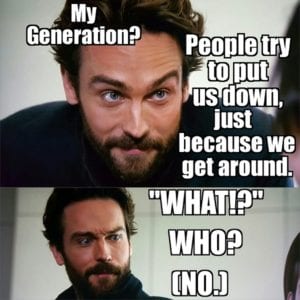 The minor online celeb Molly wants to meet is struck down by a fever after taking a photo with her and he’s taken to the hospital.

Later Alex’s Tinder date is struck by the same fever and she and Jake bump into Crane at the hospital. While there, her date has to be restrained and he ultimately bursts into flames. (The writers missed an opportunity with a Tinder date going down in flames.) 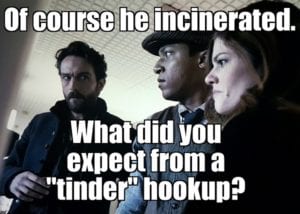 Back in the war of 1812, a hospital went up in flames from the same problem. It had been spread by a cursed political pamphlet passed out in the day. The team quickly connects the dots that the curse must have been embedded in the latest form of mass communication, a viral video started by the online celeb, Logan MacDonald.

Molly hangs out with Jenny at her trailer during the episode, protecting her from seeing any of the videos. During a meditation session with Jenny, Molly picks the Tibetan Singing Bowl as her special talent, which means she’ll be an oracle. She sees Crane as the old man in our opening vision. One has to wonder if she and Malcolm are now psychically linked.

Unfortunately, Alex has already watched the video at her Tinder date’s insistence. Alex runs off to protect the Vault and Jake from catching fire, when she realizes she is infected. 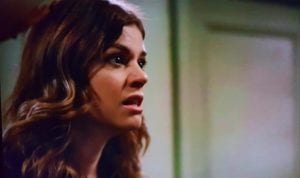 Diana, Crane and Jake figure out the infection is from some ancient jinn back during the War of 1812. The infection creates an uncontrollable draw to the jinni’s lair, where said jinni drains victims of their life force. If the patient is restrained or resists the call, they incinerate along with anyone touching them. The team decides to use the tactic of their 1800’s predecessors, by infecting one of their own, and follow the infected to the jinn hive to destroy the supernatural pest. Crane insists he be the one to view the video, but Jake announces that he already watched it to save Alex. Diana mixes up some supernatural herbs that will immediately cool down a flame-infected host, and the troop sets out to hunt some jinn. Jake is drawn to a warehouse owned by Dreyfus. Before going in Jake imparts his dying wish, in case he doesn’t make it out alive. (The writers treated this moment with reverence, but I will not.) 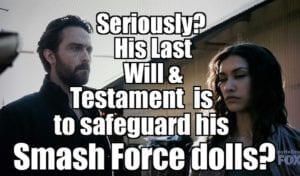 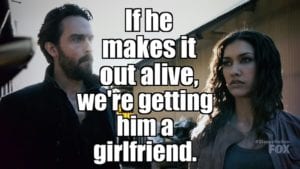 The jinni is apparently draining the life force into huge servers. Are the servers powering Malcolm’s bigger plans? Crane and friends thwart the jinni with the modern marvel of electricity. Diana shoots the jinni, throwing him into Crane. And Crane electrocutes the jinni. (Once the team thwarts Dreyfus, they should turn this server room into a cool Dr. Who themed nightclub.) 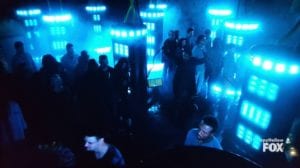 Back at the vault, Alex thanks Jake in her own guarded way. A girl can’t help but see a guy in a new light, after he infects himself with a supernatural virus to save your life. 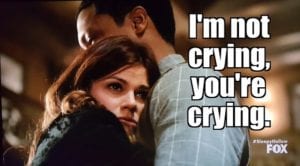 In the last scene Dreyfus is painting his new version of the American flag with the Hindu Symbol for eternal life. (Just like Hitler used the Hindu swastika as a power symbol.) Our uber Ee-vil business tycoon doesn’t think much of Crane’s Team, even though Jobe seems concerned.

Our internet sensation, Logan MacDonald arrives in Dreyfus’s lair. He was the patient zero in Dreyfus’s plan, but was obviously meant to survive. “More like him” are going to arrive, according to Malcolm. Jobe does not seem impressed with this turn of events either. 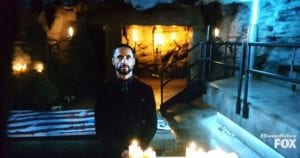 One point for geekiness, “MacDonald” literally means “son of the world ruler”. Will Dreyfus adopt this kid, or does he already have a more important daddy? Like Miss Jenny speculated, I believe Jobe has his own plans that will counter Dreyfus. Luckily our Scooby gang has Molly’s selfie to easily identify Malcolm’s new cohort.

Will we learn how the fire flu was explained to the general public? Several people spontaneously incinerating, and a gaggle of people waking up in a strange glowing server room, is hard to explain away. Will Jobe be jealous of Dreyfus fanboying over his new cronies? Will Alex make a hard play for Jake? Tune in next Friday at 9pm on FOX to find out!