This week on Sleepy Hollow, the Scooby gang thwarts a depressing spider demon that George Washington’s crew didn’t completely vanquish, and Diana faces up to Molly and Crane’s connection as witnesses. Kinda.

Jenny finds Crane’s apartment still devoid of furniture. The tv is on to a spider monster movie and his closet is full of spider webs. So, it’s a good guess a big ole’ spider demon took him. Back in the vault, the crew determines they must have brought something Ee-vil back with them after their crazy night on “J” street. The ectoplasmic goo they find at Crane’s apartment hates light, and it is connected to what Benjamin Franklin’s notes describe as, the “Cave of Despair!” (Who thinks the first order of business should be renaming these places and artifacts? They need cooler names.) Jake and Alex make sure the audience knows they are fighting the “living embodiment of despair” that almost overtook the revolutionary troops!

Jenny gets caught breaking onto a military base and Diana is roped back in to bail her out. They find the cave and Crane ensnared in the spider-demon’s cocoon. It is quickly determined that Crane is connected to the spider-demon via the webbing. So killing spidey will kill Crane. The only hope is to get him out of the “psychic nerve webbing.”

Meanwhile Crane’s is caught is a dream with the demon. The demon needs him to take his own life for his Ee-vil to work on others. The demon takes the form of Crane’s son Henry, trying to make Ichabod feel guilty for killing his Ee-vil son. Crane doesn’t succumb because he had hoped for the chance to see Henry again, and tell him he loves him. 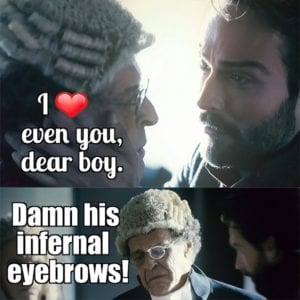 I like that they didn’t make Crane feel guilty about all this. It would have been out of character. But he does feel guilty about dragging a child into the witness role. So he may take himself to the gallows after all.

Jenny and Diana get a military grade explosive at a local bar. Alex and Jake steal some Chinese flame throwers from the Smithsonian. (While there they see Dreyfus’s hench-demon take a scroll.) Combined they can create “Fire of Joy” that thwarted the demon back in the 1700’s.

The crew cuts Crane free just in the nick of time, then kills the monster, but Crane won’t wake up. He is too deep in his illusion. Luckily Molly and Crane have a psychic connection, because it’s almost Molly’s bedtime and she can’t be in the same room as the demon. Diana breaks down and puts Molly on the phone. When asked what she would say to the nice man with the awesome eyebrows, Molly says “Never give up hope.” These were Abbie’s last words to Crane. And Crane wakes up! Finally! Battle won this week. But of course the war is still going on.

Of course Jenny has a connection to get military grade explosives. She’s a grade “A” badass. 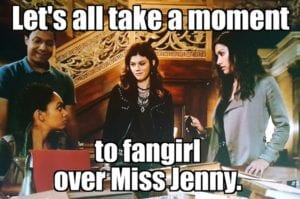 Jake can be just as much of a bad boy as Jenny. He can steal stuff from the Smithsonian. But he’ll totally be putting it right back. 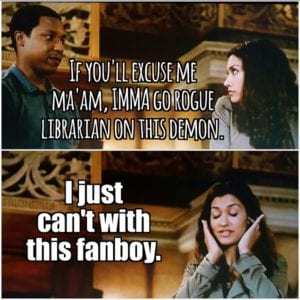 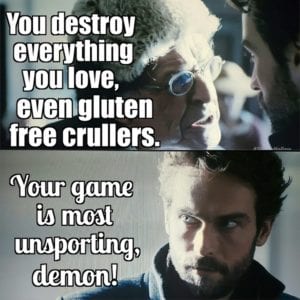 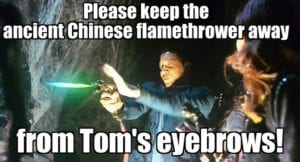 Molly brings Crane back from Oz. 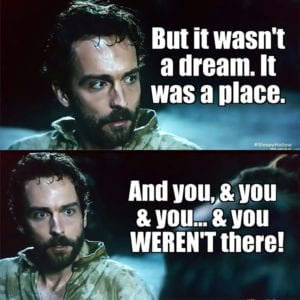 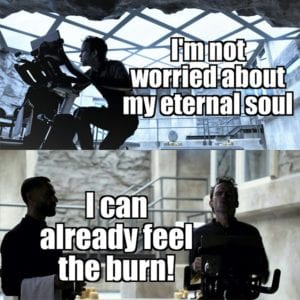 We’ll pretend the concentrated Ee-vil is now inert. Even though a face appeared in it before the credit rolled. 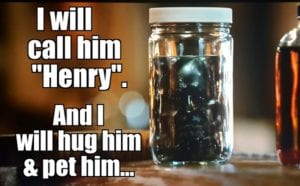