Sleepy Hollow starts to heat up this week. Our new witness Molly is pulled into the thwarting business and chemistry builds between the cast members. The writing is much improved for “Loco Parentis”. There’s a solid story this week, with good twists and turns, and no jumping to disjointed conclusions.

Crane and Diana bond while shopping for Molly’s birthday supplies. When Diana gets the call on a dead body missing a heart, Crane baby sits Molly. During her history lesson on the colonies, Crane lets Molly know that the most important part of being a Witness is to follow their instincts. Which comes in handy for Molly later in the episode.

Molly’s dad, Mitch, arrives in town for her birthday. Crane is perfectly alright with Mitch’s appearance and insists Diana should have him in Molly’s life. 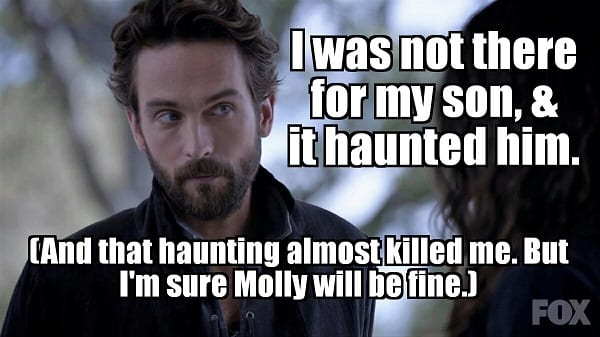 Jenny finds the magic lantern holding Jobe, that blew out of her hand in last week’s explosion. She rushes it to what looks like the same underground containment unit where they held the Horseman, where the lantern explodes. The lantern had been damaged in the explosion. She imprisons Jobe in a sacred circle and learns that Dreyfus is probably alive. She realizes that Jobe had something to gain from Dreyfus getting out of his contract with hell. Maybe he’s just a genie assigned to Dreyfus, not a demon proper. He really didn’t like the comments about having Stockholm Syndrome and being a two-bit genie. (Being a genie would explain why he doesn’t have his shirt on this episode.)

With two more bodies missing hearts, one in Sleepy Hollow, Jenny and Crane come to the conclusion that the Philosopher’s Stone explosion must have transformed Dreyfus into the monster responsible for the recent deaths.

Then the team learns the bodies are stacking up outside of Dreyfus’s activity range and time frame. The last one found was killed in Plymouth, Massachusetts before Dreyfus’s transformation. So it can’t be him. Crane remembers a monster that stowed away on the Mayflower with the pilgrims. It disguises itself as a trusted family member and eats little girls’ hearts. It spurred the legend of Little Red Riding Hood. This monster was interned by the Pilgrims under an enchanted rock, Plymouth Rock.

Upon hearing that the Pilgrim’s monster disguised himself as the colonial girl’s father, Diana snaps out of her girlie fog over her ex and realizes Mitch has six months left on his deployment. He should be in town. And a quick phone call confirms he is still in Afghanistan. Molly has been taken by the beast.

The creature needs the heart of a Witness. The original Pilgrim girl was a Witness too, but Molly has yet to turn 11m which is when she’ll earn her Witness stipes. Molly thinks dad is taking her for ice cream, but when they end up far from home she follows her instincts. The fake Mitch doesn’t know Molly’s birthday gift from last year. So she insists on stopping at a bathroom and gets away.

Like all good demon stories, it turns out Molly accidentally summoned him while looking for answers about Witnesses. So not talking to Molly about being a Witness was a bad idea.

Jobe finds the monster’s location in exchange for freedom. Crane and Diana thwart the werewolf. And Molly hugs mom and then rushes into Crane’s arms. 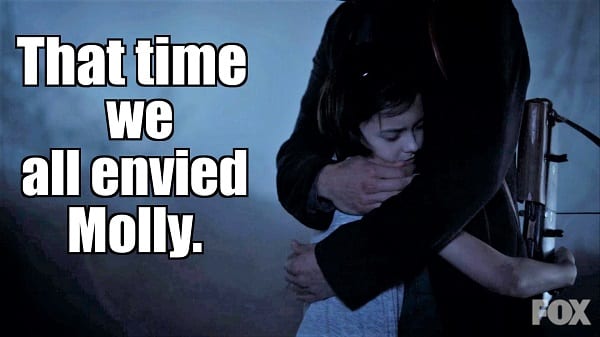 In the end, Dreyfus, a little worse for wear, arrives at a company board meeting and fires everyone. He explains that he had to destroy who he was, to become who he needed to be. So he WAS a lackluster minor evil before. Maybe now he’ll be a major EE-vil player. When Jobe shows up, Dreyfus tells him he wants the whole world born again. 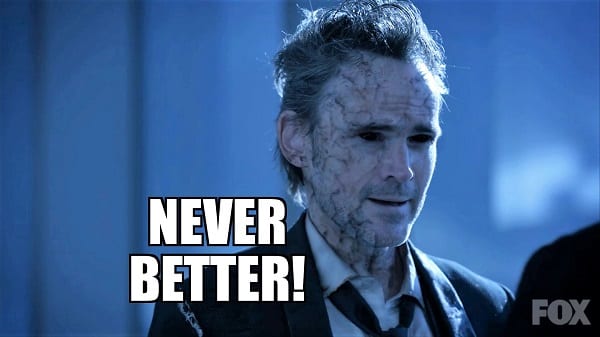 Is Jobe the least little bit upset that Dreyfus didn’t look for him? Into what form does Malcolm want our world born again? Will Alex and Jake be back next week? Will Diana realize that Crane is much cuter than her ex? Tune in next Friday on FOX to find out. 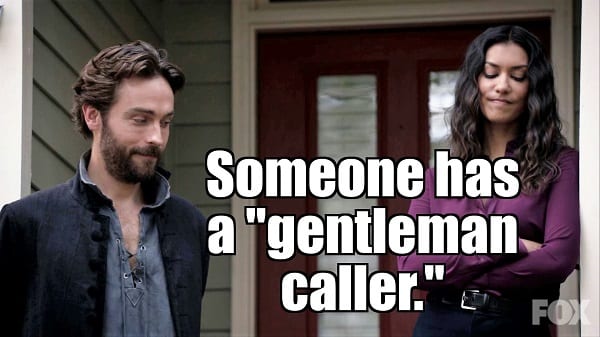 Finally! A reference to the Scooby Gang! 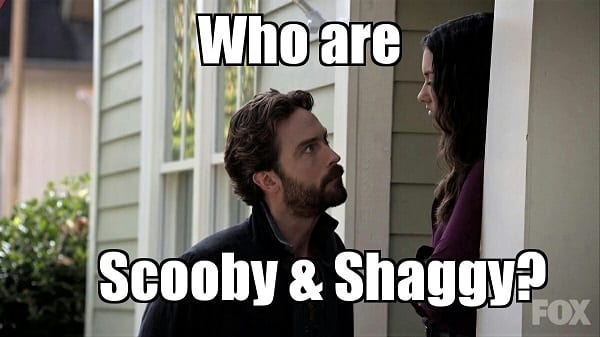 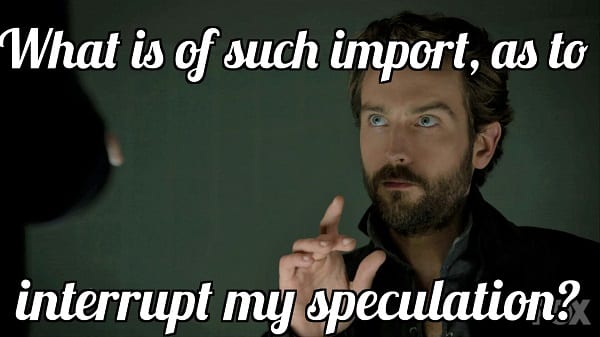 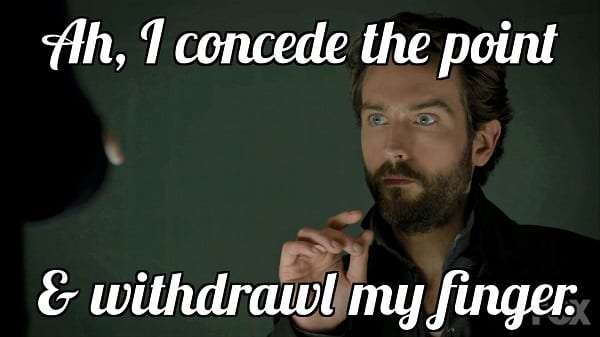 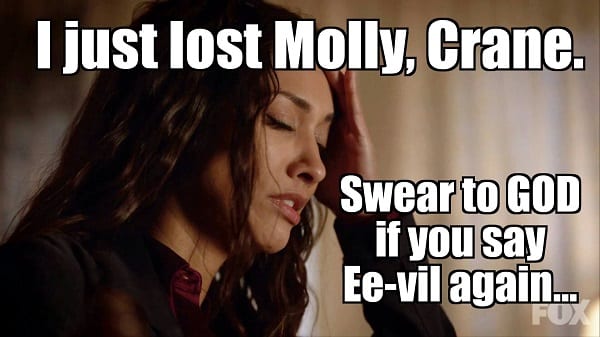 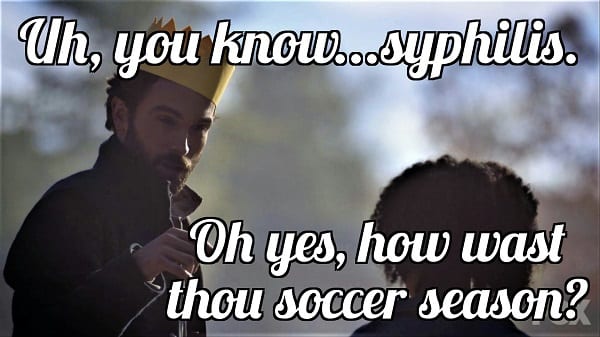 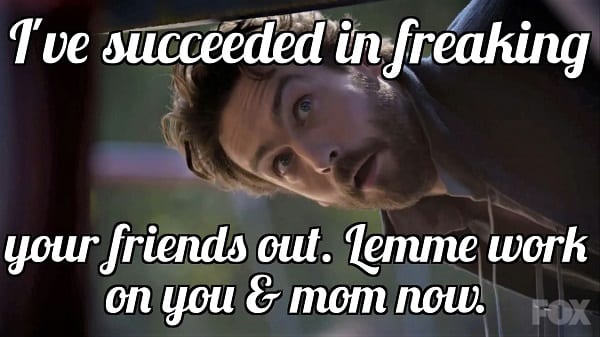 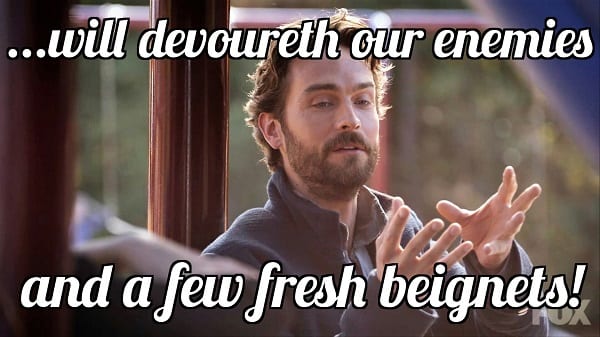