Crane hunts for a new apartment, while Headless hunts the President. Diana and Crane review the evidence. Yup, it’s the Horseman as Crane suspects. He updates a reluctant Diana, who’s seen a demon, a witch and now a Headless Horseman. She is weary, but willing to accept. Crane explains, with an eye brow raised, that the Horseman is an abomination, EE-vil, and a terribly unreasonable fellow. They deduce Headless wants the President’s head because the heads of powerful rulers were believed to have great power back in the day. The Scooby Crew quickly realize there is some mystical barrier that blocked the Horseman from getting the President. The barrier is created by symbols, hidden in a tunnel under the road the Horseman was on.

Crane waxes on about plans for the Nation’s Capital that he “read” were delivered to Benjamin Bannecker in the 1700’s. Jake calls Crane out on his knowledge of Benjamin Bannecker, because Jake, history nerd that he is, knows all of Bannecker’s writing were lost in a fire. Crane confesses his past to the new crew.

Jenny conveniently remembers the symbols they saw in the tunnels from a black market folio of Benjamin Bannecker. And she just as easily discovers the folio was purchased by our uber-evil villain, Malcolm Dreyfus. Crane and Diana visit Dreyfus, who willingly speaks with them. Since he’s evil, he is quite the charmer. He offers up several of his crimes, that may have spawned their visit. “Did you find the ditch where all the bodies were buried?” They laugh it off. They discuss Dreyfus’s success in business and his interest in lore that caused him to buy the folio. He openly admits his success is due to selling his soul to the devil. Everyone, except Crane, laughs that off too. (I love an honest villain. I bet they get him monologuing at some point.) He willingly gives them the folio. As they leave, Dreyfus explains to his demon henchman that he gave them the folio, because Crane is better suited to trap the Horseman. And once trapped, they can get the Horseman on their side.

It turns out there’s a hidden street in Washington D.C. where they can ensnare Headless. “J” Street, between “I” and “K” Streets, can only be opened by supernatural forces. Before they battle the Horseman, Crane tells Diana that her daughter’s the next Witness. But of course that’s when the Horseman shows up. No time to rationalize the crazy. They capture the Horseman. Diana says there is no way she is letting her daughter near any of this drama. And Dreyfus negotiates with the Horseman. (When has Headless ever been so reasonable?)

Jenny and Jake harass Crane about his personality and appearance while they look at the apartment. Jake tells him the neighborhood may seem bad, but it is up and coming, “In a few years it will be full of cupcake joints and record stores.” There’s the magic word. “Cupcakes.” Crane really needs a girlfriend this season, he’s clearly sublimating stuff. 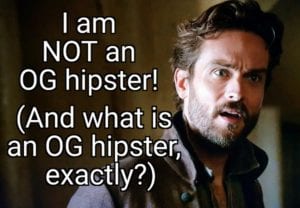 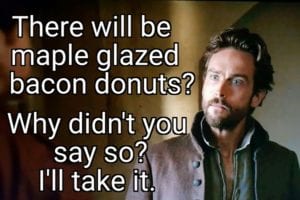 Since Alex is the one in charge of weapons and logistics she has legit questions about the Horseman. Everyone throws her shade, but hey, sometimes the answers aren’t mystical voodoo. (Is it me, or is Alex vaguely Katrina-ish in the looks department?) 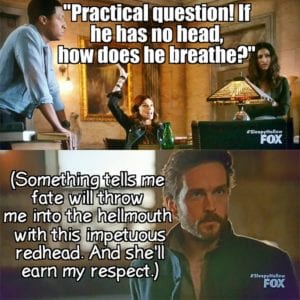 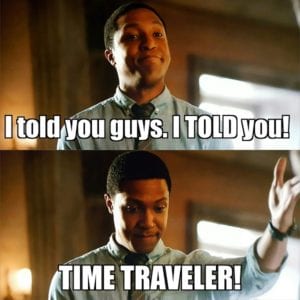 After procuring the map from the folio, the crew notes that Bannecker’s layout for Washington D.C. is identical to L’Enfant’s plans? “A story for another day,” says Crane. I bet we hear it next week! 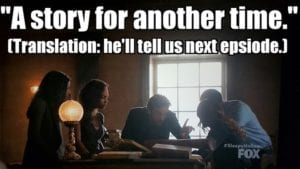 No one thought of getting the secret passageway opened BEFORE Headless arrived. So of course it’s done in the nick of time. 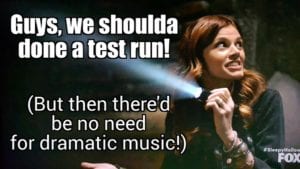 Crane builds some IKEA furniture before the goo from his boot attacks him. It’s always fun to see Crane vexed by modern marvels. 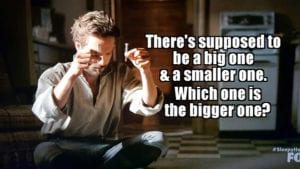 The ectoplasm Crane stepped in while fighting the Horseman attacks Crane at the end of the episode. We’ll learn about that next week. But never fear, Evil Dreyfus said he’s only looking for companies with fifty-year business plans. People who dream of the apocalypse, don’t invest long term.