We start this week with Jake humiliating himself on a kids’ obstacle course. He’s decided he needs to be in better shape as a demon fighting Archivist. Alex video tapes James Bond’s failure and posts it online. 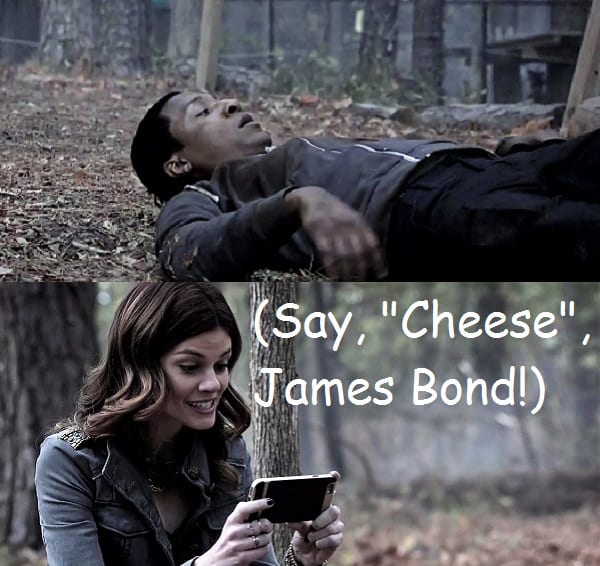 But Alex says our geeky librarian doesn’t need to prove himself to anyone, and majorly starts crushing on him. There is something about a man willing to sacrifice himself for you. 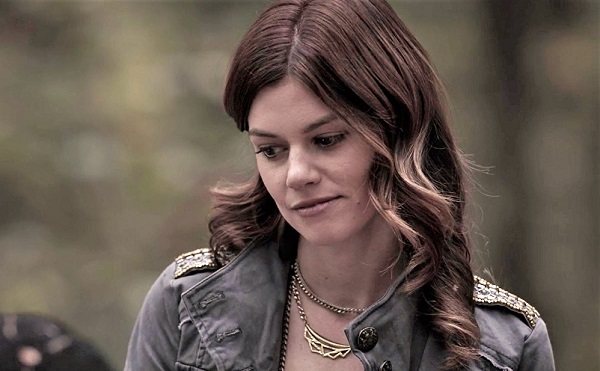 Cracks start showing in Molly, with the little exposure she has had to life as a witness. She doesn’t want to talk, not even with her favorite teacher. (Her teen years are going to be a joy.) 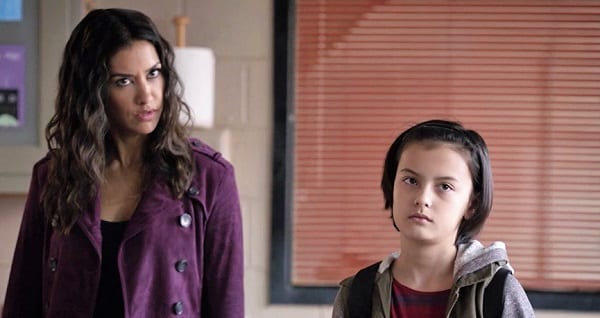 Mom shows Molly the Vault. If she has to learn about the danger and Ee-vil in the world, she may as well see the fun parts too. Whoa. She thinks that’s really cool. 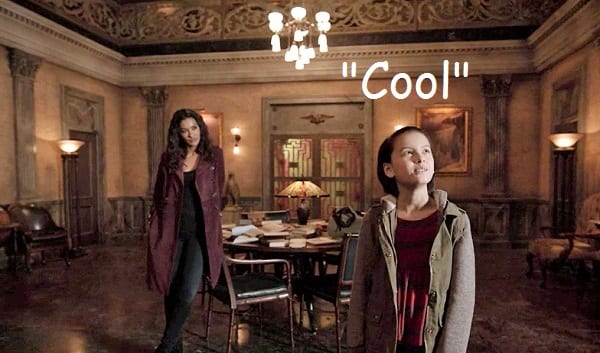 She even thinks all of Jakes’s geeky stuff is cool. 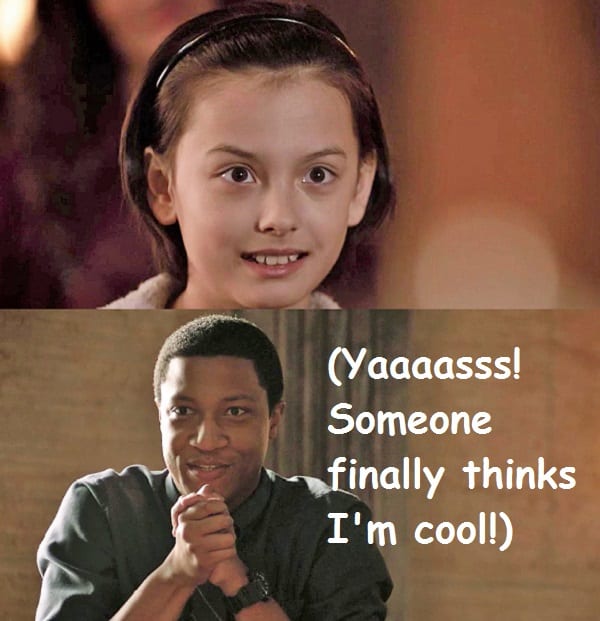 Dreyfus is sleeping on a bed on nails to gain insight into his visions. That was painful. He has a vision of a dinner with Molly. They get along well. Are they connected psychically through Headless? (And where is Headless?) Dreyfus is so happy he isn’t alone in the future. Will our little Cindy Lou Who be the key to melting the Grinch’s heart? 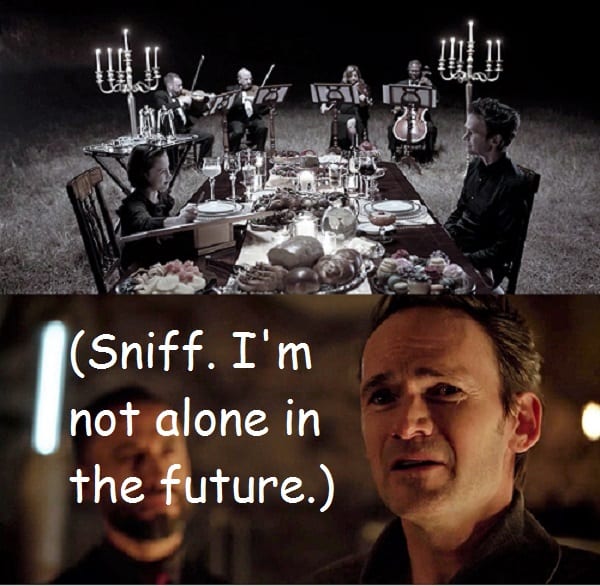 Crane tells Molly that Davy Crockett’s hat is made from a monster pelt and she gets a little lesson in the supernatural. After Crane’s long spiel about where monsters come from, Molly summarizes it with “Bad people equal bad monsters.” Excellent. Children grasp these things so much quicker than adults. 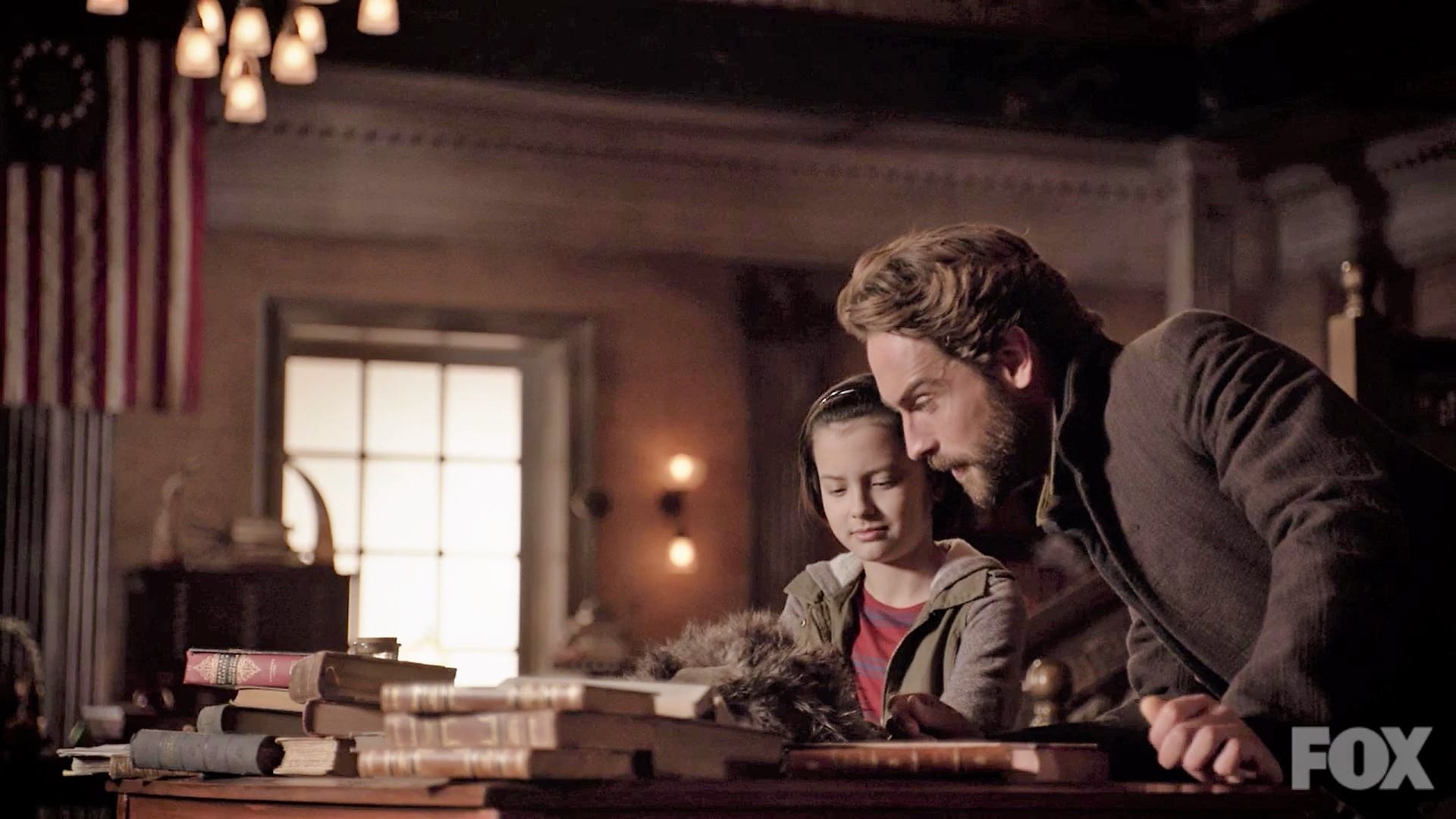 Molly thinks her Mr. Stitch is a good monster. Crane looks very concerned and uneasy about this. Is he worried about Mr. Stitch because of his son’s past dealing with a golem or does he sense a darkness in Molly’s abilities, after she conjured the shapeshifting werewolf? 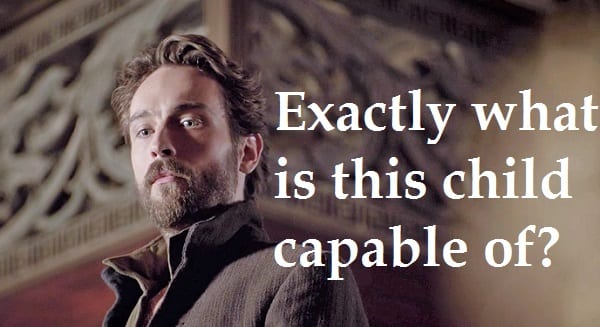 Crane shows Molly the secret passage ways under the city that Jake uses to store his wine. Whoa. 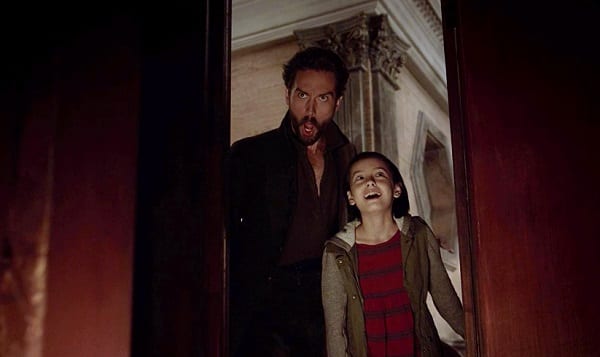 Molly has somehow invoked her Mr. Stitches in the underground tunnels, while drawing in her book. The Vault goes into lock down with Crane and Molly trapped inside. 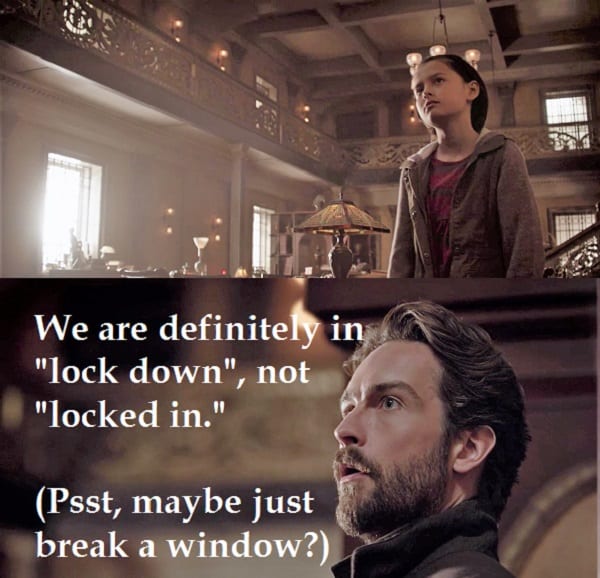 Alex and Jake, right outside the Vault, learn the last archivist, Claudia Russell set up the last security system. They set out to find her to figure out how to unlock the Vault, but find a booby trapped house and Claudia’s long dead body. They also find an ominous video left by Claudia, who couldn’t take the demons or the memories of lost friends anymore. Alex has a minor melt down over this revelation.

Diana goes to speak with Molly’s art teacher, but finds that something has attacked him. The teacher has a piece of Molly’s baby quilt in his hand. Molly and Crane put one and one together quickly and realize Molly’s Mr. Stitch has come to life.

Crane tries to explain the power of her talents to Molly, using the imagery of the Greek myth of Pygmalion. Turns out Molly is very angry at her mom for lying to her about the Witness stuff. So Mr. Stitch is probably going after mom. 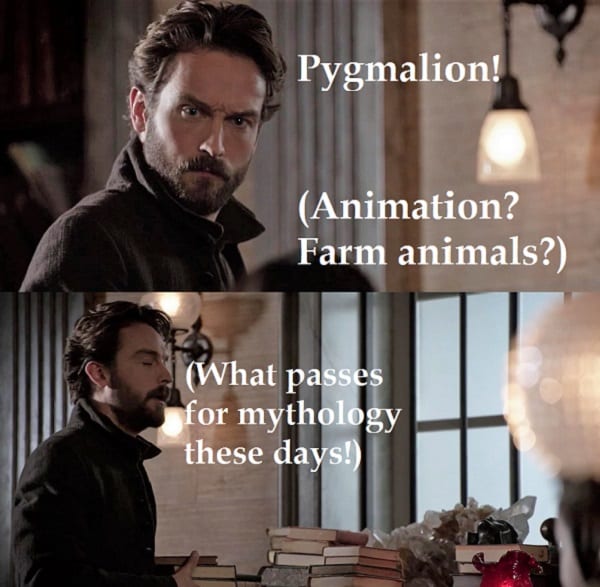 Miss Jenny and Diana get Molly’s original quilt and head out to destroy the monster. Mr. Stitch attacks mom at home. But he leaves at sundown because, in Molly’s mythos, Mr. Stitch has to go to bed at sundown.

The team learns of an exit in the Vault through a vent. (I still don’t understand why they didn’t just break a window.) Molly is the only one who fits, so Crane lowers her down into the vent. The first exit is jammed, so Molly unties hers tether and exits a street grate. She finds Dreyfus awaiting her. He introduces himself, lets her know the world will get better and leaves. Not creepy at all.

Diana and Jenny find the amusement park where Molly would have had Mr. Stitch live. Mr. Stitch goes after mom while Miss Jenny works her spell. In the nick of time Molly arrives and tells her monster to leave her mom alone. She and mom have a heart to heart, while Jenny finishes the ritual and evaporates the monster. Everyone is sad to see the creepy patchwork man go. A part of her childhood has been taken – a creepy, demonic part of her childhood.

After the Vault is opened, Alex finds a reader in Molly’s backpack. It had been donated to Molly’s school by Dreyfus’s company. It has a demonic emblem embedded in it. So Dreyfus’s bad mojo was what caused Molly’s monster to appear, not necessarily Molly.

In the last scene we see Dreyfus shutting down all his offices. He needs to focus on the future, not running a business. Jobe tells him his new recruits are on their way. And Dreyfus talks of Molly, and how great the future will be, saying she needs a father. 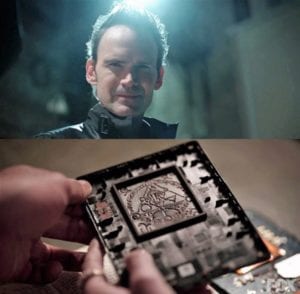 Will he put a spell on Diana to marry him, or wear a Mitch (Molly’s dad) suit to trick Molly again? She has good instincts, but she is already tired of the adult games. It’s possible Malcolm could easily influence her. Find out what Malcolm’s next move is and what new demon will be fought, next week on Sleepy Hollow, Friday at 9pm on Fox.