We start this week’s episode in an ole-timey healer’s tent. Dreyfus’s henchman, Jobe, grabs another artifact from the charlatan running the show. Our Dreyfus’s demon bodyguard, is then killed by a newly introduced hooded demon. We assume he’s a demon because his baseball bat has glowing symbols all over it and he’s able to kill Jobe. We don’t know if Jobe’s dead-dead or just sent back to hell. 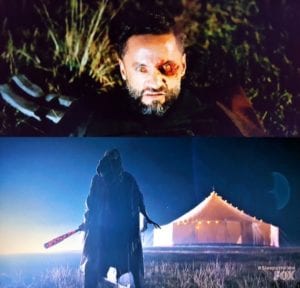 Meanwhile, the Scooby Crew has figured out that Dreyfus is at the center of the plot, but we still don’t know what the plot is. Diana is excited because they now have legal cause to question Dreyfus, since Alex and Jake saw Jobe kill the missing guard. (But if a judge asks, wouldn’t they have seen the murder, while they were breaking into the Smithsonian’s archives? We’ll suspend belief for now.)

Crane presses, “There is no victory for you without a gallery,” implying Malcolm wants to show off his demonic prizes. Just when Malcom starts to wiggle out of the accusations, the hooded demon breaks into the facility. The demon puts the security systems into lock down, which locks everyone inside with him, then rigs the joint with what seems enough “Greek Fire,” to take out an entire city. When Crane and Diana confront the dude with all the demonic scars, Diana is almost killed; and Ichabod, Diana and Dreyfus all seek shelter in Dreyfus’s Ee-vil lair/workout room.

It turns out Malcolm was jealous of his partner, Ansel’s salesmanship. Malcolm had been the brains of their operation, but no one would listen to him. He didn’t seek out the devil for a deal and didn’t mean for his partner Ansel to end up in hell, it was an accident. And now that accident is back for revenge. I’m less interested in Malcolm as our bad guy now. He just fell into his Ee-vil deeds, and now is just afraid of hell. He’s collecting all the pieces of the “Philosopher’s Stone” to cheat death itself. And now Ansel wants it to regain his life with it. I’m in Ansel’s corner, except for the whole ‘wanting to blow up the building’ thing.

The Scooby Crew manages to override the security system of the building. Jenny shows up in the nick of time, with an “anti-venom” phrase to counteract the magic of Ansel’s satanic tattoos. Crane stabs Ansel, to save Jenny. Then Ansel pulls out a vile of “Greek Fire” to blow the place up. Despite previous internal injuries, Diana throws herself out to catch the vile. The day is saved again. Great team work, guys!

Diana finally has ‘the talk’ with Molly, the one about being a witness. Molly is cool with it. And she calls mom out on her “injuries.” Molly knows they weren’t from a “workout.”

Lastly, the Scooby gang realizes that the scrolls taken from the Smithsonian are maps of mystical lay lines. They determine the last piece of the Philosopher’s Stone must be back in Sleepy Hollow. So, we’ll see you next week in Sleepy Hollow!

Jobe shows us he’s a little sacrilegious. He is a demon after all. 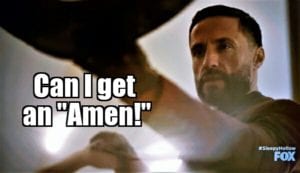 Diana feels more comfortable with Crane around Molly. He attends Molly’s soccer game and educates the team about the gruesome origins of the game. He claims it was started with the Celts kicking a Danish prince’s head around. 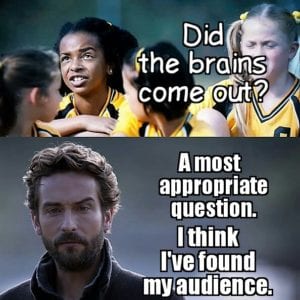 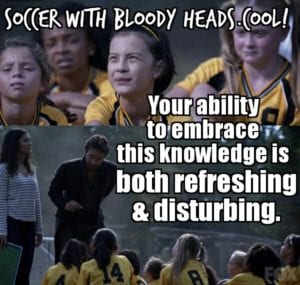 Diana wonders if her witness daughter has special gifts. 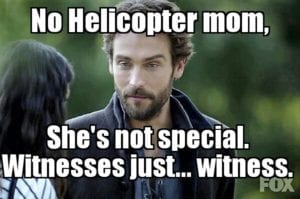 Despite all our technology, the librarians rely on an old fashion cork board! 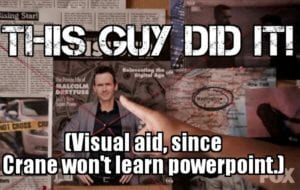 Even the Federal agent misses the legal nuances of their investigation. 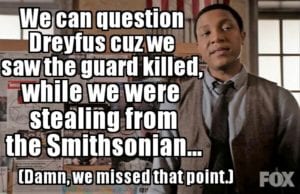 Jake is bombing with Ms. Jenny. He asks Alex to help him win Jenny over. The girls start to bond over hacker language. 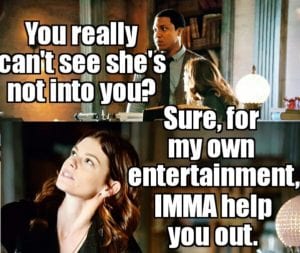 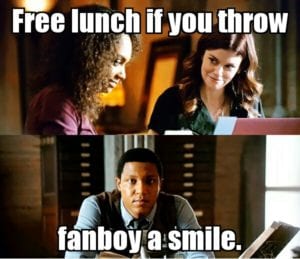 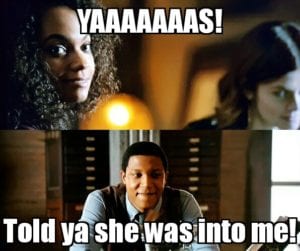 Crane learns the artifact is the Philosopher’s Stone. And our new bad guy is a skinny, hooded, bald guy, whose face is messed up. Where’s Harry when you need him? 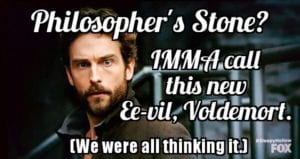 Next week we head back to Sleepy Hollow in search of Dreyfus!