Last Friday we saw Ichabod saved from the Cave of Despair, but saw little of our uber Ee-vil friend, Dreyfus. This Friday, in “Blood from a Stone”, we’ll learn from whence Malcolm came. And there’s a warlock who can move bullets with his mind. He looks pretty beaten up. Is he Malcolm’s former partner? 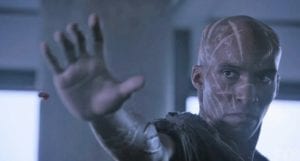 It looks like a cork board has gone up in The Vault, with push pins and missing people posters, so connections are being made. Will we find out what Dreyfus has planned?

Does the “blood” in the title, come from the concrete artifacts Dreyfus has been collecting, or from Dreyfus himself? Do we learn if Dreyfus made his billions as a PartyLite candle sales rep?

Will Crane’s eye brows bewitch Malcolm into confessing his plans?

I bet Dreyfus is so proud of his plans, that he flaunts them. He just needs a “captive” audience.

Is Dreyfus afraid he can’t control the Ee-vil he’s unleashing? He looks a little scared here.

Will a supernatural cleaning crew be called in to clean up Crane’s new digs? 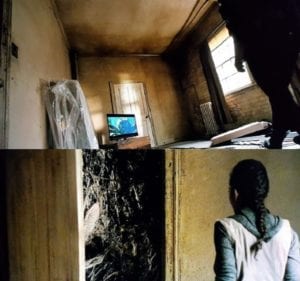 And we’re still waiting to see if Crane’s apartment will ever get furnished.

To get answers to these questions and more, tune in to FOX at 9pm ET/PT Friday!