You guys better be ready, because shark season will be here before you know it. Grab your family, pets, and chainsaws because my forecast predicts that a huge Sharknado will hit us hard this summer! 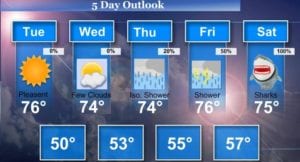 Of course Ian Ziering and Tara Reid will be back in action for this installment, but we have to wait a little longer before we know who will be making cameos. We do know a little bit about the plot, though. Remember at the end of Sharknado 4, when the Eiffel Tower falls out of a sharknado and into Niagara Falls? Yeah, that’s a hint as to what’ll happen next…

“With much of North America lying in ruins, the rest of the world braces for the inevitable: a global sharknado. From London to Asia, South Africa to Mexico, Fin and his family must put a stop to the sharknados once and for all.”

So grab whatever is laying next to you to defend yourself and prepare for the biggest storm you’ve ever seen!

There is no official release date yet, but if this installment follows the pattern of the previous storms, it’s likely to touchdown sometime this summer.

Who do you want to make a cameo in