Shooter may have just been canceled over at USA, but nothing’s slowing Shantel VanSanten down. The One Tree Hill and Flash alum has just boarded Apple’s upcoming space race drama series from Outlander and Battlestar Galactica’s Ronald D. Moore. VanSanten joined Altered Carbon’s Joel Kinnaman who was cast in the leading role earlier this month. Apple first ordered the concept to series back in December. 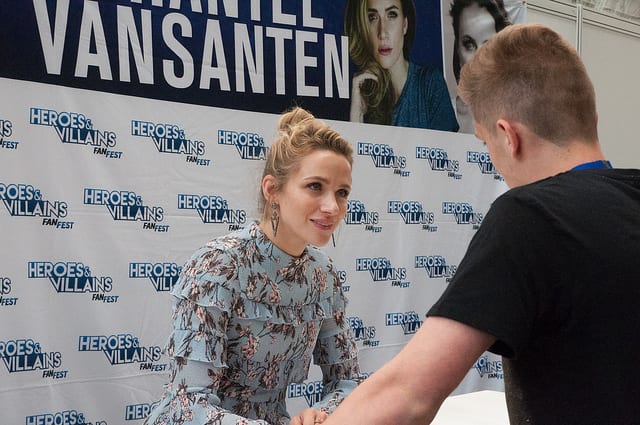 According to TVLine, the untitled series “imagines a world where the global space race of the 1960s never ended, with Kinnaman starring as top NASA astronaut Edward Baldwin.” VanSanten will be playing Edward’s wife Karen Baldwin The pair is joined by Patriot’s Michael Dorman and Sons of Anarchy’s  Sarah Jones who have been cast to play married NASA employees Gordo and Tracy Stevens.

The series will be produced by Sony Pictures Television in conjunction with Ronald D. Moore’s banner Tall Ship Productions. It was both created and written by Moore, whose credits also include Star Trek, Roswell, and Mission: Impossible II, as well as Matt Wolpert and Ben Nedivi. The three of them will all executive produce with Tall Ship’s Maril Davis.

Moore’s series will join a growing lineup from Apple, which features series such as Jason Momoa’s See, Aaron Paul and Octavia Spencer’s Are You Sleeping? and the untitled Reese Witherspoon/Jennifer Aniston project and It’s Always Sunny’s Charlie Day and Rob McElhenney’s new comedy. Kristen Wiig was originally attached to star in a comedy series but had to drop out due to filming conflicts with Wonder Woman 1984.

VanSanten got her big break when she starred on One Tree Hill as Quinn James from 2009 until the series finale in 2012. She also had a starring role on The CW’s The Messengers for its first and only season and quickly moved over to The Flash to guest star as Patty Spivot in season 2. She guest-starred on a few shows such as Timeless and Scorpion before booking the role of Julie Swagger opposite Ryan Phillipe in USA’s Shooter, which ran for three seasons.