September 18, 2017…mark your calendar, set a reminder and tell a friend! That is the day that the Shake Shack will add 2 new milkshakes inspired by and in celebration of the return of one of our favorite sitcoms, Will & Grace.

Entertainment Weekly reports that NBC teamed up with the burger chain to bring us their newest menu items named after the 4 main characters of the series: Will & Grace and Jack & Karen. 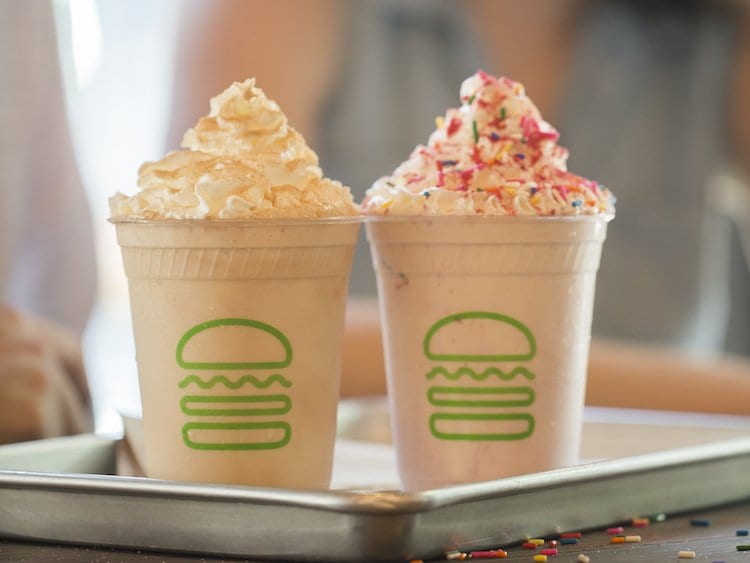 The “Will & Grace” will be made especially for you with Shack fudge, cinnamon marshmallow frozen custard and topped with whipped cream and cinnamon sugar.

The “Jack & Karen” will be made with strawberry frozen custard that is blended with Prosecco, topped with whipped cream with rainbow sprinkles and raspberry dust. The Shake Shack’s first ever shake made with wine! Definitely not for the kiddos!

The two milkshakes will only be available at select Los Angeles and NYC Shake Shack locations for $5.99. I’d say that’s a very good deal with or without the wine.

A recent press release by the Shake Shack reveals that, along with NBC, they have also partnered with GLAAD with $2 from every Will & Grace inspired shake sold going to the non-profit organization.

“Not only were we able to create some delicious shakes that capture the personalities of the show’s cast, but we’re also proud to be aligned with the show and support GLAAD…Both continue to pave the way for LGBTQ visibility in media and our culture. “

The sweet concoctions will only be available for a limited time until October 1.  The Will & Grace revival premieres Thursday, September 28, at 9 pm and has already been renewed for a second season.

‘Will & Grace’: Harry Connick Jr. to Reprise His Role as Leo and Jack Discovers Online Dating in a New Series Promo