Sebastian Stan is willing to do pretty much anything to get you into that movie theatre seat. His newest movie, Monday, is coming out soon and I guess he wants to motivate people to see it. Sebastian Stan posted his butt on Instagram just to motivate you to go see his movie! Now you pretty much have to, right? I mean, at the very least, anyone who bothered to look at the picture. The image was posted Monday night (hehe), and I’ll put it down below so you can check it out. If you do, just remember it’s like signing a contract. You see the butt you gotta go see Monday but not until Friday. Confused yet? Yeah, I am too. 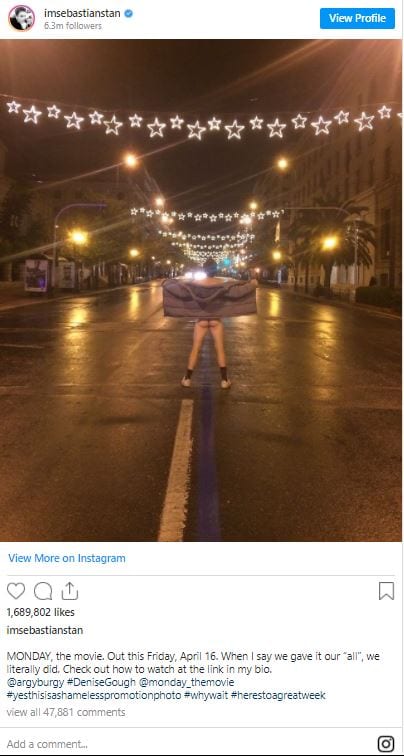 “Monday, the movie. Out the Friday, April 16. When I say we gave it our ‘all,’ we literally did. Check out how to watch at the link in my bio.” Stan shared along with the photo, though, I don’t think anyone was looking at the words.

The biggest problem with seeing Monday is going to be actually being able to see it. You see, the problem is that the pandemic is still ongoing at the time of this writing. Why is that such a problem you may be asking? Well because in many places around the world movie theatres are still closed. I’m in Canada myself and in my city, they briefly opened and have been shut down for months again. So even if I wanted to see the movie, I can’t. Not in theatres anyway. If you want to watch it on demand though, it will be available there as well this Friday. I’ll leave the synopsis for the film down below.

When Mickey is introduced to Chloe one hot summer night in Athens, the attraction between the pair is immediately palpable — so palpable that before they know it they’re waking up naked on the beach on Saturday morning.

You can catch Stan every Friday on The Falcon And The Winter Soldier as well, where he’s been awesome! You’re happy Sebastian Stan posted his butt, aren’t you? Don’t lie.