If you live in, or near, a big city chances are you’ve seen the mural walls that bring people together to share one thing they want to accomplish. The walls state ‘Someday I want to’ followed by blank space where visitors can share a goal or a dream.

Everything from small goals to massive dreams and fun accomplishments to life-changing movements are put on display for people all around the world to see (thanks to social media) and to aid in finding some inspiration of their own.

Then, there was an aspiration that stood out amongst others.

‘Someday I want to help someone.’ 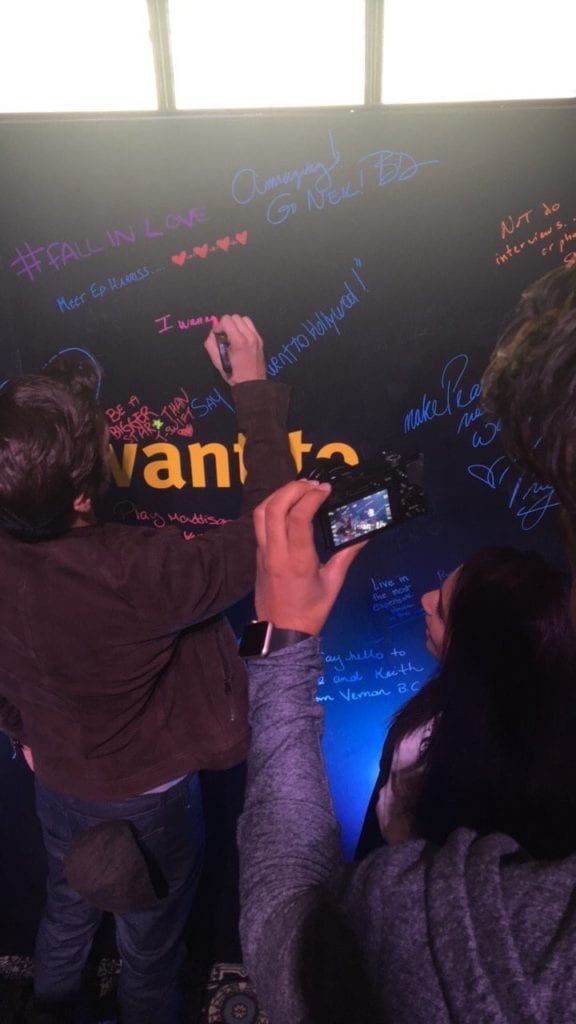 Sebastian wrote the phrase on the wall at TIFF and, without realizing it, inspired fans across the world that he’d already helped to come together and help him make that ‘wish’ a reality. Fans saw his message, and how it was so different than the other desires written on that wall, and were reminded again how special his heart is.

If you ask fans of Sebastian why they admire him so much, you’d get a vast array of answers. From his humor and his dedication to his craft to his kindness and the way he uses his platform to make a difference – he’s a celebrity that doesn’t fit ‘the mold’. His actions aren’t selfish, instead, they’re selfless and he makes every fan he meets feel like they’re important – like they matter to him as much as he matters to them.

In many cases, when Sebastian’s messages reach his fans, it’s thanks to social media. He takes the time to respond to fans who send him messages and he comments on art, photos, and other methods of expression that fans use to show their gratitude for him, as an actor and as a person.

So when one fan saw the wall and Sebastian’s wish, a plan was immediately put into action. Not only has the first set goal been surpassed, the message is still being spread and so far – the project has surpassed expectations, and it’s not even been open for an entire week yet. It’s a true show of what people can do when they come together.

The project is titled ‘I Wanna Help Someone’ and you can connect via Instagram, Twitter, and Tumblr. Initially, the goal was set to raise 1,500 for a charity close to Sebastian’s heart, Unitas. However, the new goal is set at 3,000 and it looks like it will, too, be met soon.

We asked the organizer why now was the time to do something like this for Sebastian, and what the end goal was.

I was inspired to do this project when Sebastian attended a premiere for his upcoming movie I, Tonya. During the event he was asked to finish the prompt ‘Someday I want to…’. He finished the statement with the words ‘…I wanna help someone.’ He wasn’t the only celebrity to finish the prompt but he was the only one who wrote something that didn’t somehow improve his current life. The one thing he wants most in his life is to help others. So I thought, ‘Why not make that happen?’

I Started the ‘I Wanna Help Someone’ foundation where all money is being donated to a charity he supports ‘Unitas’ who work to prevent human trafficking, and all of the money raised will be donated in Sebastian’s name.

Sebastian attends the charity gala for Unitas yearly and fans immediately knew this would be the perfect organization to donate to in Sebastian’s name. Unitas is a non profit determined to prevent and end human trafficking.  Via their website, their mission statement is as follows.

Unitas is an international humanitarian organization working to provide solutions in the fight against human trafficking. We develop and support programs to:

PREVENT – Stop trafficking before it starts.

The fundraiser is open for 24 days so there’s still time to donate in honor of Sebastian and be part of the movement that shows him how much help he already provides to his fans every single day.

It’s easy to become jaded in Hollywood, but Sebastian has never been anything but the kind, encouraging, and honest person that he was when he started out in the business and as he grows within himself, mentally and emotionally, he shares with his fans encouragements that will allow them to do the same.

While he may not have realized it before, we hope Sebastian sees now how much he helps people every day and how he makes his fans want to be better people, just because of who he is. Not many people can say that about themselves.

If you want to get involved, you can check out the fundraising page, or visit the social media links posted above. We’d like to thank @BuckysInfinity for starting this fundraiser and Sebastian himself for being a light that inspires us all.