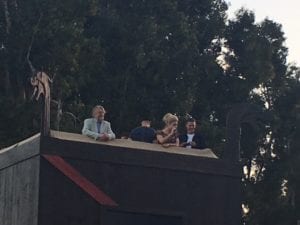 This past Friday San Diego Comic-Con attendees witnessed the first ever Viking funeral held by History’s Vikings. The event was held in honor of Ragnar Lothbrok along with other characters who headed to Valhalla in season 4. Not only were there a ton of fans dressed in Viking attire, but cast members Katheryn Winnick (Lagertha), Gustaf Skarsgård (Floki), Alexander Ludwig (Bjorn), and Alex Høgh Andersen (Ivar the Boneless) were also present. 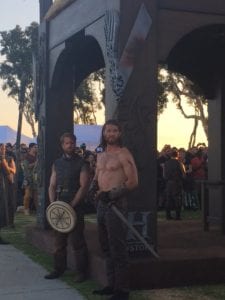 The ceremony began with a procession of fans walking through the Gaslamp Quarter and ended by the Embarcardero Marina Park South, where a 45-foot replica of a Viking long-ship was set on fire and burned for nearly 10 minutes.

As the crowd walked through the procession, Winnick and other cast members watched from the top of a nearby building. They took sips from the popular Viking horns and then threw them down for fans.

Dedicated attendees were able to channel their inner Viking-selves. Many were in cosplays of their favorite characters and showed off body art while they blew into their Viking horns. As the group neared the end of the procession, they chanted their final farewell to Ragnar and other beloved characters from season 4; sending them off to Valhalla as the ship was set ablaze.

The cast joined the crowd for some pictures just as the ship began burning on the edge of the marina. 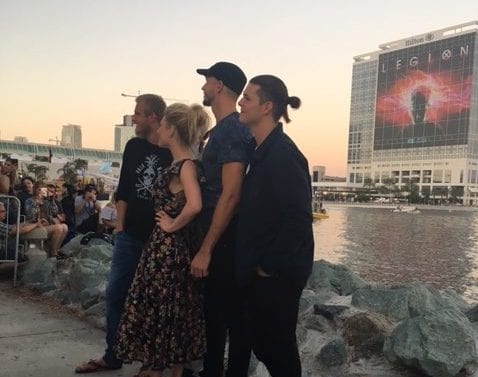 Winnick stating, “We will love season 5!” And we believe her!

Watch the ship burn in true Kattegat style and take your own moment to say farewell to some brave warriors from season 4!

This ceremony was not only a great way for fans to say goodbye, but it was also a fantastic time to celebrate a renewal as this show evolves. With their leader gone, we can’t wait to see how the sons of Ragnar and other key players are going to deal with that loss.

The History channel event at SDCC gave spectators an amazing way to participate in a ritual from the show itself. The awesome funeral event comes after a lively panel in which die hard fans were given quite a treat!

The one and only Travis Fimmel (Ragnar Lothbrok) disguised as a Kangaroo crashed the panel. As he jumped on stage to give Winnick a hug, Skarsgård ripped off his mask. Now that’s what we call making an entrance!

And yes we finally have a premier date! Vikings will be back on Wednesday, November 29. SKÅL!