Fear The Walking Dead fans at SDCC were granted access to a press conference today where opportunities arose for them to ask the cast and show runners about the series. There were questions about characters reunited, praise for the Spanish episode, and questions on whether or not a cross over with The Walking Dead would ever be possible.

A few of the major takeaway points were a few statements made by Michael Greyeyes that show the heart of the show and what’s possible next.

Greyeyes had a lot to say about the storyline and how it sort of rides the line between what audiences expect and the stereotypes they could play into but how the depiction is a bit different.

‘The storyline is really exciting because it’s riddled with tension between what audiences sort of expect and they play into stereotypes of violence and brutality within our community but actually, I applaud the approach like the depiction of our culture.‘

Greyeyes says that he was able to embrace his character’s violent side and called Qaletaqa Walker a true leader.

‘This is a world in which all of the old rules are broken because this is the end of the world.‘

The cast as a whole liked that they were able to do their own thing and tell their own stories and that in season 3 they’re really getting a groove for it. It’s a season where the stories and the characters are strong and epic. Fans caught on to this as well, as season 3 is largely hailed the most well liked of the series so far. 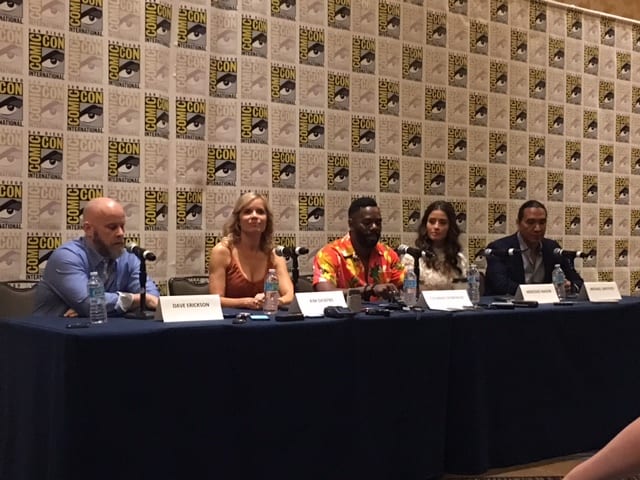 Greyeyes went on to say that the fact that anything can happen is what has made this season so successful.

‘Anything can happen this season and I think what that does is it injects a kind of realism into the rest of the season.‘

When a series becomes predictable with its plot, the reality is lost, and even shows about the undead or supernatural thrive best with a foot in the door of realism. That being said, we’re excited to see the rest of season 3 and to see what the cast and crew have in store for us in season 4.

As far as that big crossover question? Robert Kirkman and Chris Hardwick addressed it below.

What takeaways did you enjoy most from the Fear The Walking Dead panel? Let us know.