With 6 seasons of American Horror Story behind us, we all know that every year, producers of the show like to keep all us fans guessing what the next season’s theme will be. Who will be leaving the show? Who will make a cameo this season? Who will be returning for another season? Well, at least, a partial answer to one of those questions has been revealed recently. Sarah Paulson, fresh off her win at the Golden Globes for her performance as Marsha Clark in the award winning ‘The People v O. J. Simpson: American Crime Story’, and long-time AHS veteran Even Peters have both been confirmed that they have been cast for the seventh season of the show.

At the Television Critics Association’s press tour, show runner, Ryan Murphy was asked about the theme of  this year’s season and if it would be kept a secret like last year’s Roanoke. Of course not much was revealed except that Paulson and Peters were set to return and that it would be set in modern times.

“I don’t know [if we’ll keep it quiet]. Last year was successful. I don’t know if we’ll do it again. I think maybe we’ll release some of it earlier than we did. But I just started writing it, I haven’t even cast it yet — except for Sarah and Evan. It’s a modern-day story. That’s all I can say.” ~Ryan Murphy

Along with that came the news that FX has renewed AHS for another 2 season after season 7. This will make American Horror Story the longest-running dramatic series for the FX network.

So I guess that in time, we will see who does return and who doesn’t. I’m hoping that Jessica Lange will return to the horror anthology at some point. 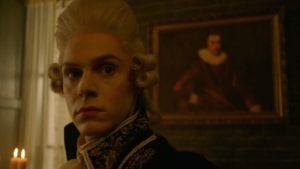 So, who do you think will be returning for Season 7? What are your theme predictions? Don’t forget to watch Season 7 of American Horror Story on FX.