Dancing with the Stars premiered its new season tonight on ABC with a whole new cast of Mirror Ball Trophy hopefuls.  Perhaps the most controversial of the cast includes American Olympian, Ryan Lochte (check out the full cast line up HERE).

The Olympic swimmer has recently become the center of much unwanted attention after he claimed to be robbed and held at gunpoint by Rio authorities but later recanted his story saying he exaggerated the incident.  The whole situation has caused Lochte to lose endorsements, receive a suspension from the sport and be stripped of his Olympic winnings.

Prior to the incident in Rio, Lochte had agreed to partake in season 23 of Dancing with the Stars.  After his debut performance tonight, the live show was interrupted by an off-camera incident.  Reportedly, two individuals wearing anti-Lochte t-shirts rushed the stage in protest of Lochte causing quite a scare for the disgraced Olympian and the entire DWTS cast.

While judge Carrie Ann Inaba was beginning to give her critique of Lochte’s performance, her tone changed and she began telling someone off camera to back off before repeatedly saying, “Excuse me.  Excuse me.”

While the camera remained focused on Inaba, several figures (which we now know were security) ran past and a brief scuffle could be heard off camera before host Tom Bergeron took the live show to a commercial break.

When they returned from commercial, it was not immediately known what happened however, Bergeron stated, “We had to go to break because we had a little incident.  I’d like to personally thank our security team for staying in shape.” 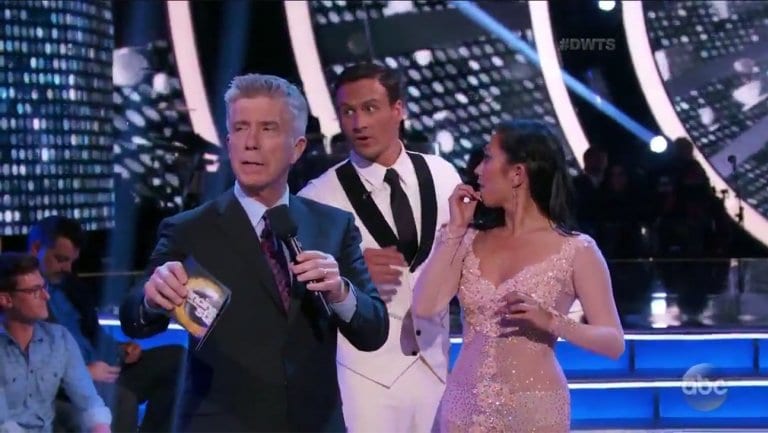 Lochte and his professional partner, Cheryl Burke, appeared to be shaken.  Bergeron asked Lochte how he was doing and he replied, “I’m doing good. So many feelings are going through my head right now. A little hurt. I came out here and wanted to do something I’m completely not comfortable with and I did and I came out here with a big smile.”

Burke stood by her dancing counterpart by adding, “I’m shocked and I’m hurt for Ryan…He’s an amazing guy, he’s great, he’s kind and he’s just here working his butt off and trying to do what he’s supposed to be doing, which is dancing.”

Lochte gave a solid first time performance on tonight’s premiere and the judges assured him he will be judged only on his dancing, not on anything else that has happened outside of the DWTS stage.

UPDATE: ABC News posted a quick video of the off-camera commotion on their twitter feed: