Leading up to the premiere of Roseanne‘s revival season, fans had a lot of questions about how the new version of the series would deal with some of the loose ends of its original run.  One of the major unanswered questions was regarding how the series would deal with the untimely death of Glenn Quinn who played Becky’s boyfriend Mark on the show.  On this past Tuesday night’s episode, the series paid tribute to their late cast member for the first time this season.

In the revival season, Becky (played by Lecy Goranson) has been working towards becoming a surrogate for a woman named Andrea (played by Sarah Chalke – aka. the other Becky).  During last night’s episode, we learned that she is having issues with fertility and may not be able to have children at all.  This leads to an emotional scene between her and her sister Darlene (played by Sara Gilbert).

While a drunk Becky is in tears and drowning her sorrows, she confesses that she and Mark had previously tried to conceive before his death (on the show) but they were not able to do so.  She continues by saying she’ll never meet “anyone as good” as Mark who she would consider having children with and now, she’s learned that she most likely can’t.  In a rare moment of sisterly love, Darlene replies, “it’s not betraying Mark to move on.”

It was a touching moment and really the first mention of the character since they revealed that he had passed away on the show.  To cap it off, the episode ended with a tribute card dedicating the episode to Quinn. 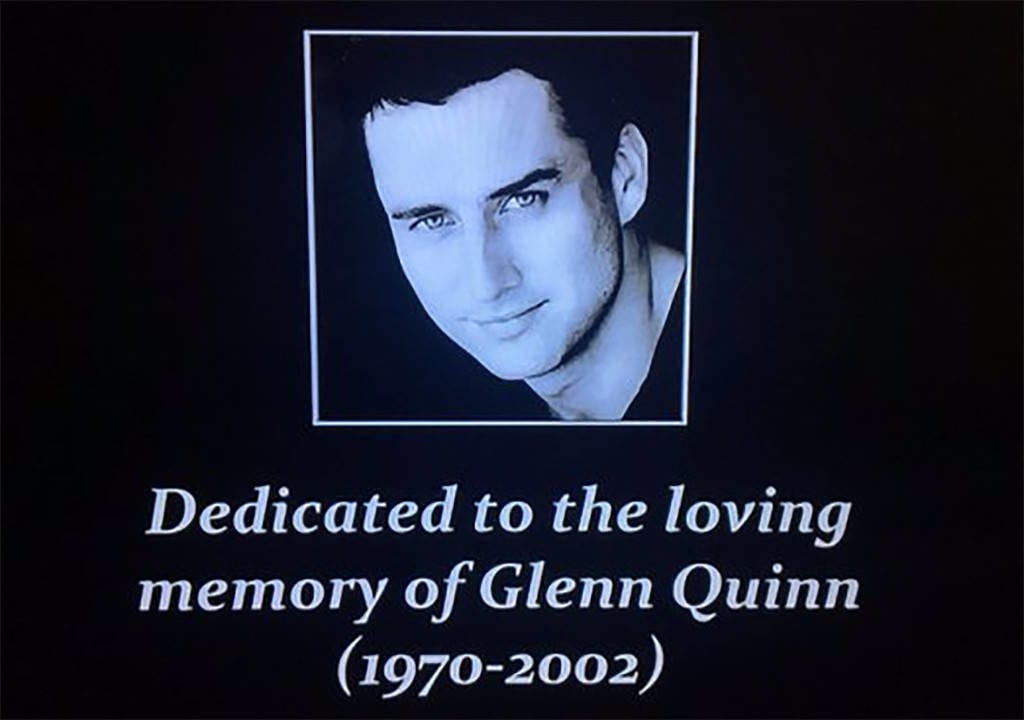 On Tuesday morning, series star Michael Fishman (who plays D.J. Conner) recapped the episode on his Facebook and also added a touching and well-versed tribute to his late co-worker and friend.  Of Quinn, he said,

[row]”Finally, the show ended with a tribute to our late, beloved Glenn Quinn. I have said many times Glenn was an amazing person. He lit up every room he entered and every set he walked on. As a show, we never considered replacing his character. Recasting as some in the media suggested was never even an option. Glenn is irreplaceable.

I personally do my best to honor him. His family remains in close contact. His sisters were on set several weeks this season. His niece can be seen in a later episode. Glenn is missed by us daily. He remains part of the show, and close to our hearts. Before each taping, we do cast introductions for the audience. We come out of Roseanne and Dan’s master bedroom, through the kitchen to meet the crowd. It is an exhilarating immediate connection with fans. In that hallway, I brought in Glenn’s picture, we each pass it before every episode we film. We remember Glenn every day. He will always be with us, part of us, part of the #Roseanne show and family.”[/row]

You can read Fishman’s full recap below and be sure to tune in to Roseanne Tuesday nights at 8 PM EST on ABC.