One look into this upcoming 2 hours music event’s Facebook page would bring you to a massive battlefield. Lines have been drawn and there are a bunch of people upset at the mere thought of this remake,and others seem to at least be willing to give it a chance. Recently, I had a chance to see the new Rocky Horror Picture Show and here are my thoughts.

All in all, the film stays very true to the original story,going so far as to go off the original film’s script,so we won’t go over the plot much in this review.All of your favorite songs are back and the new cast does a fantastic job with them (Personal Favorites were “Sweet Transvestite and Hot Patootie(Bless My Soul”).The film seems to take place in the same time frame as the original did as there is no cell phones or mentions of modern technology(besides some house cameras).  The problem I have with this film isn’t the casting but the insistence on merely replicating the previous actor’s portrayals.

Laverne Cox is a phenomenal actress, but in this film, she settles on talking exactly like Tim Curry’s Frank N Furter the entire time and it definitely detracts both from the performance and the film itself. Likewise,The same can be said for Christina Milian’s portrayal as Magenta, which is probably the weakest performance in the film. However,It was a nice touch seeing Tim Curry as the narrator, and he seemed to be enjoying himself every time that he was on screen. From the email that he sent to press members:

“I’m honored to have been given the opportunity to return and be a part of this new version… It’s an experience you won’t want to miss, and for you “virgins” out there, this is your chance to see why this cult classic is one of the most popular films of all time and still plays in movie theaters around the world!”

In the time it took you to read that, that was about the time Curry was in the movie(much like the narrator in the original). Some of the standouts here were Ryan McCartan(Brad), who does a pretty impressive job of taking the reigns from Barry Bostwick,Victoria Justice (Janet) who does a admirable job trying to fill Susan Sarandon’s shoes and Adam Lambert,who practically steals the entire film as Eddie. When Adam was announced, I was almost certain that he would not be able to live up to Meatloaf’s portrayal, but he not only lived up to it but in my opinion actually surpassed it.

Also of note you may be surprised at what they get away with on this TV Film,as it surprisingly manages to stay close to the original in terms of racy content. But what the film ultimately succeeds at best, is scope. Due to a higher budget the sets and effects are pretty spectacular,from a collapsing castle to a gigantic theater showing the film, FOX seems to have spared no expense. When it comes to the question of is this film good or bad, ultimately I have to go with good. While it has many faults, it seems to have been created with love and reverence for the source material,something that can’t be said for most remakes nowadays. Nothing will top the original, but much like “Ghostbusters” this film is a gateway film that if the teens/young adults it’s aimed at give it a shot (and like it), they may be willing to go watch the original and see the classic that has caused many dress up sessions at midnight screenings over the past 40 years. We can’t hate on that,can we? 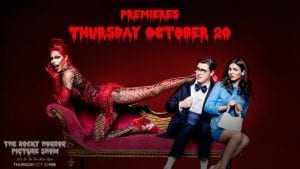 Have questions about the remake? Tweet me @cjcnov88 and I will answer them!