Robin Wright has made a comeback in a big way in the last several years. Wright was a house hold name in the 90’s with her role as Princess Buttercup in The Princess Bride and Jenny in Forest Gump. Huffington Post reported that in a sit down with Judith Rodin, president of The Rockefeller Foundation Wright talked about taking time off to raise her children who are now in their 20’s. 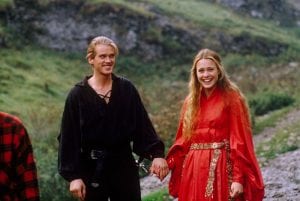 “Because I wasn’t working full time, I wasn’t building my salary bracket. If you don’t build that … with notoriety and presence, you’re not in the game anymore. You become a B-list actor. You’re not box office material,” Wright said. “You don’t hold the value you would have held if you had done four movies a year like Nicole Kidman and Cate Blanchett did during the time I was raising my kids. Now I’m kind of on a comeback at 50 years old.”

Wright now co-stars, exc produces, and sometimes directs the Netflix hit political drama House of Cards, she plays First Lady Claire Underwood. Since the inception of the show Claire’s cunning master mind has been as impressive has her male counter part Frank Underwood, played by two time Oscar winner Kevin Spacey. Wright talked about how equal the two characters are in most ways.

“It was the perfect paradigm. There are very few films or TV shows where the male, the patriarch, and the matriarch are equal. And they are in ‘House of Cards. I was looking at the statistics and Claire Underwood’s character was more popular than [Frank’s] for a period of time. So I capitalized on it. I was like, ‘You better pay me or I’m going to go public.”

Netflix did agree to pay Robin the same as her co-star. Kevin Spacey was reported to be making 500,000 per episode  in 2014 with the possibility of making 1 million for season 3, which would make him one of the highest paid TV actors per episode. I am a little behind on the House of Cards train just starting the show recently, but Robin Wright’s performance has blown me away in every single episode. In addition to House of Cards, Wright has just wrapped filming DC’s Wonder Woman, where she will be playing Diana’s aunt Antiope. Wright not only is, but has been portraying strong fierce women who demand respect and get it! Seeing more woman like her in Hollywood would not break my heart.

Home » Uncategorized » Robin Wright is a Force to be Reckoned With