Last episode we saw Wonder Woman’s official origin story, tonight we take a look at Superman’s origin and the great minds behind him.

Superman was the first superhero, he recreated the comic book world, for without him, there’d be no DC or Marvel, today. He was conceived in Cleveland, Ohio by Jerry Siegel and Joe Shuster.

Jerry and Joe were outcasts who loved stories and dreamed of a future in comics. They worked on their high school paper together and they created a magazine featuring their first idea of Superman. Superman was originally a villain, and the idea didn’t really work out.

After the death of Jerry’s father, he decided that Superman should be a hero who vows to destroy evil. This change made him autoboigraphical to Jerry and Joe. Jerry wanted justice for his father’s death and Joe wanted to be bigger and stronger.

In 1933, Superman was born. Unfortunately, Jerry and Joe couldn’t sell him to publishers. Superman wasn’t believable and no one thought he would sell magazines.

In 1937, Jack Liebowitz and Harry Donenfeld from DC comics took a chance on Superman. They wanted Jerry and Joe to format the story into a 13 page book. Signing with DC meant that Superman would be known world-wide, but also meant that they would have to give up their rights to the character. 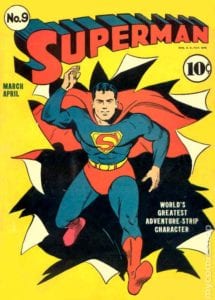 When World War 2 began, Superman became the symbol for hope to the world. Superman’s fame blew up: cartoons, merchandise, etc…  and so did Jerry and Joe’s workload.

After the bombing of Pearl Harbor, Jerry was drafted into the war and could no longer write for Superman.  He also wasn’t consulted on the spin-off series “Superboy”. Because Jerry was at war, DC started to really take over Superman.

Jerry decided to pursue justice in 1947 and convinced Joe to do the same. Unfortunately when they had signed the contract in 1937, they had given up Superman and they were ultimately fired from DC. Superman then went on to be a TV series, starring George Reeves.

Jerry and Joe decided not to give up and tried to create a new hero. It was a flop. Joanne, Jerry’s wife took matters into her own hands and got Jerry a job back at DC as a staff writer. Jerry still felt like he was being cheated.

In 1967, Jerry and Joe sued DC again. The left the court without Superman and they were then fully closed off from the comic book world.

When news broke out that Superman would be a movie, Jerry decided to finally speak up for himself. In the 1970s, Neal Adams got a hold of Jerry’s story and gets Joe and Jerry a press conference. He knew they were telling the truth and wanted the world to hear it too.

The public saw that Jerry and Joe weren’t treated fairly and Warner Communications settled the issue by compensating them generously.

The movie premiered in 1978 and Jerry and Joe were a part of that night. They were finally recognized as the creators of Superman.