Betty still feels paranoid about the murder, but the annoyance of Chic living with her is canceling out that paranoia. He is everywhere!

Hiram suggests that Veronica and Archie plan a weekend getaway at the lake. He wants Veronica far away from the house due to some business meetings he will be holding. They invite Betty and Jughead. Jughead sees this as an opportunity to interview Veronica, but Betty wants this as an escape from Chic.

Before leaving, Bughead makes a pit stop at Betty’s house. Chic threatens Jughead by saying things will end badly for Betty and Alice if he tells anyone about the murder. 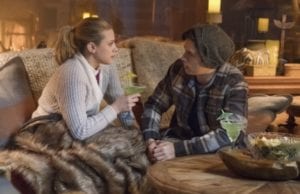 At the lake, Jughead gets a call. Cheryl just wanted to inform him of Betty and Archie’s kiss at Christmas. At school, Toni overhears Cheryl and kindly asks what’s going on with her. Cheryl runs away from her.

Jughead is more upset that she didn’t tell him than he is about the actual kiss. Their emotional apology is interrupted by the sound of Archie and Veronica in the next room. Bring on the margaritas!

Still feeling some tension, Veronica suggests they all hit the hot tub and that Veronica and Jughead should kiss. You know, to level the playing field.

Betty asks Jughead if he enjoyed kissing Veronica. When he doesn’t answer, she comes out of the bathroom as Dark Betty to punish him just in case he did enjoy it.  She also points out that he and Archie are the only two in the group who haven’t kissed.

Archie is visibly shaken by the kiss and his ego gets the best of him as Veronica asks him for space while she and Betty go into town. Veronica ends up flirting with the cashier to let off some steam. 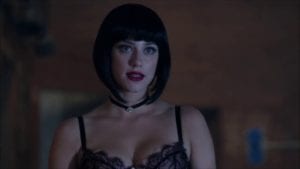 FP calls Jughead to tell him that the eviction notices were voided because Hiram bought the trailer park and is allowing the Serpents to stay. FP is ecstatic but Jughead isn’t. He confronts Veronica about it but they tell him to call it a win.

Alice then calls Betty to say that Hiram bought the Riverdale Register. What is he up to? Now the group is fully divided.

While arguing, some men break into the lodge demanding money. Veronica recognizes one of them as the cashier from the store from earlier. Luckily Veronica hit the silent alarm before the men could do anything drastic.

Archie chases after the men, hoping to get Veronica’s necklace back and tackles one of them. Andre tells him that he’ll handle this and sends Archie back. A gunshot is heard in the distance. 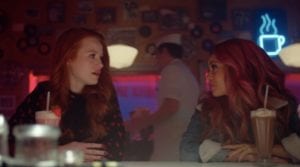 Back at Riverdale, Mayor McCoy reveals to Josie that she is leaving her father for Sheriff Keller. Josie calls Kevin to meet up so she can tell him about his dad and her mom. He didn’t know. Josie felt like Kevin should know even if it meant imploding the Keller family.

Toni sees Cheryl alone and asks if she’d like to join her since Fangs stood her up. Shout out to Love, Simon! After the movie, Cheryl confides in Toni that she was in love with a girl and that her mother made her feel ashamed of it.

The fabulous four have made up. Tragedy usually forces you to look at things with a new perspective.

Hiram is buying everything in sight. Why? Pretty soon we’ll have to rename the town! I’m not going to lie, I have a love/hate relationship with Hiram and Archie. But on a lighter note, I am so glad that Cheryl is finally talking to someone. Toni is there for her and I am getting all of the feels from these two. Hopefully, something sparks between them because they’d be the ultimate power couple. See you next week for more drama in Riverdale.