This week is the big Carrie: The Musical episode! Kevin is directing the musical and has asked Jughead to videotape a behind the scenes documentary. The musical is full of drama, but that drama isn’t kept on the stage, things are still tense among our fab four. Plus Hiram and Hermione seem to still have wicked tricks up their sleeves. 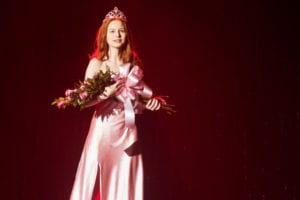 Back to the musical, not everyone is happy that Cheryl is Carrie. After Cheryl’s brush with death, Kevin gets a note from the “Black hood” demanding that the role of Carrie White be recast. He can’t be back, Sheriff Keller shot him. He’s dead. Betty immediately thinks Ethel wrote the note. Maybe it was Josie? Anyway, rehearsals are moving well and ironically, the characters in the musical mirror the Riverdale highschoolers perfectly. Although in Riverdale, the roles are a little blurrier. Everyone has some Chris or Sue in them.

Kevin finds another note from the black hood… and tells Cheryl about it. She refuses to back down. Coincidentally, Penelope is there to crush Cheryl’s dreams. So now Midge is Carrie. Toni comforts Cheryl telling her that she isn’t finished playing Carrie yet. Meanwhile, Alice breaks down after singing thinking that she drove out everyone around her. She’s not entirely wrong, but it was still sad to see a mother beg her daughter not to leave her. 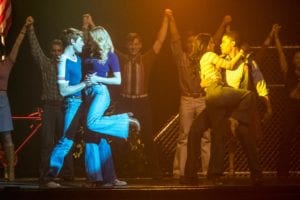 On opening night, Hal brings his girls flowers and asks to come home. Alice says that he can but there can’t be any secrets. Chic isn’t Hal’s son, but he’s ok with that. Archie calls Hiram out on trying to wedge his way between him and Fred. He returns the Firebird and buys a jalopy that he can fix up with Fred. Back at Thistledown, Cheryl has decided to go full Carrie and get back at her mother. She covers herself in blood and demands to be emancipated.

When the curtain rises, Midge is pinned to the backdrop with knives. She is dead.

Woah this cast can sing! This musical was a perfect match for the show. Both are dark and intense and beautiful, I love when shows about highschoolers have a musical number. Anyway, it was great to see that even though this was a special episode, the drama offstage was just as important. I love, love, love scary Cheryl, but the tension when Chic is on the screen is enough to crack my TV. I can’t wait to see more of these two. And WHO killed Midge? WHO’s black hood? WHAT is going on? I thought the murders were over. I can’t wait for next week!